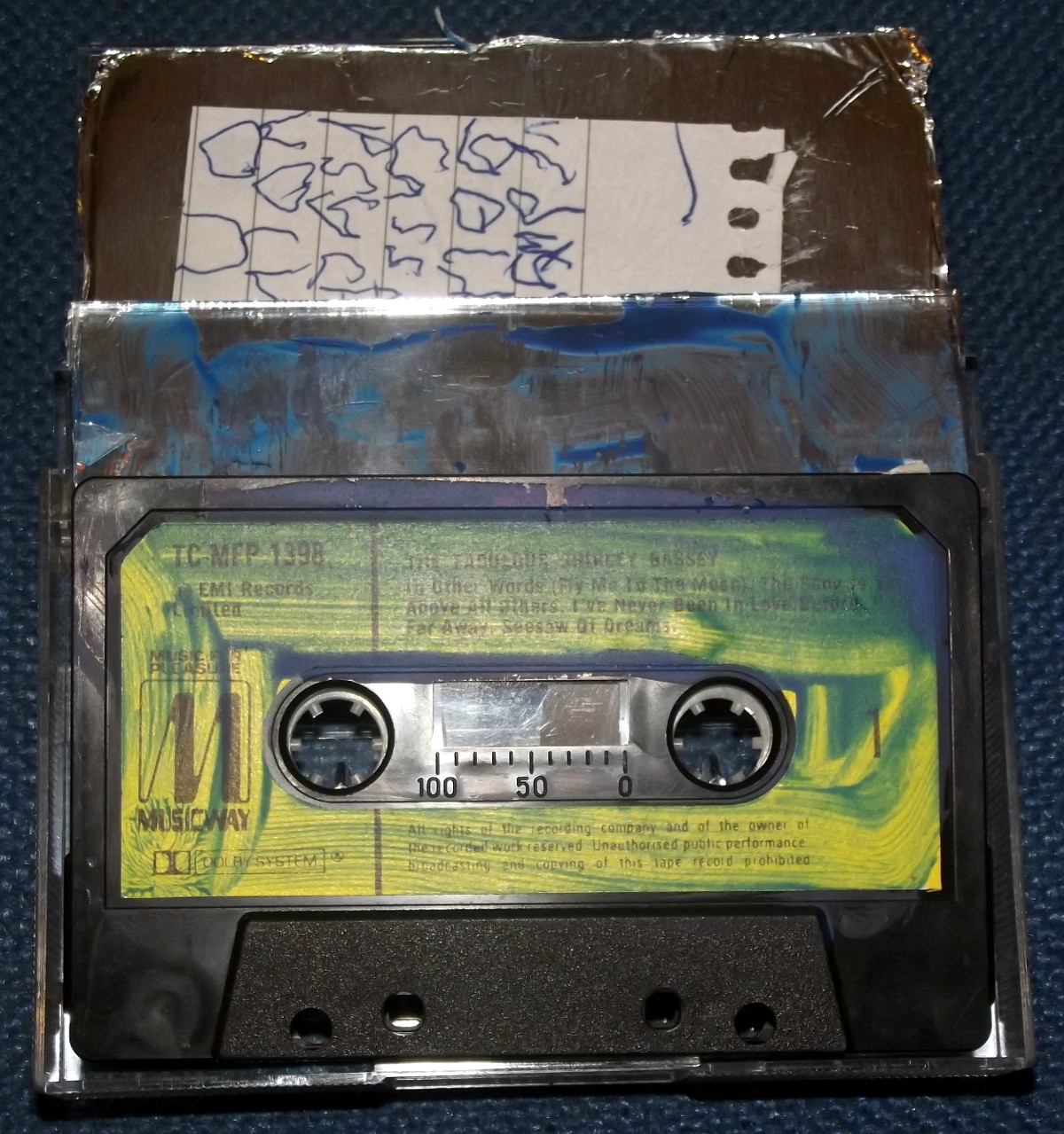 Great package from Darren Wyngarde aka Filthy Turd…no-nonsense English noisemaker of prolific proportions…active and social he be, engaging with noise in a physical and sweaty manner, aided by fellow oddballs, not footling around with computers or antiseptic conceptual notions…arrived here in May 2012…two cassette tapes, wrapped up in a magazine spread (and I use the word advisedly), with some underfloor felt / debris / muck thrown in, hopefully lifted from under one of his fetid carpets…neither tape is titled that I can see, although one of them might be called URDWYG THE GOLDERR – CASSETTE PSYCHIC VOLUME 1 …this one is made from a recycled musicassette, wherein El Filtho has recorded his dire diablry over top of pre-recorded elements but not allowed any remnants of original to survive…such cassettes are probably impossible to give away even in charity shops now, who have turned their backs on VHS tapes long ago…the deal with this release is that the item is not for sale or manufactured in conventional sense, and to hear it you must send a tape in your possession to the warlock himself, whereupon he will refashion and refit it with his grim horrors, hand-making all covers, each one unique…at same time guaranteeing to wreck your equipment…a potent spell then…seems he has already enlisted over 50 subscribers to the scheme, each man willingly signing up for a walk to the gallows tree…so far a pretty convincing raid from under the floorboards, subterranean spirits and demons surfacing to take what is rightfully theirs among the sweepings, the leavings, the dust, the neglected cobwebs of England’s collective murky psyche…obvious clue to remark on here is the sex-magic undercurrent, as bejudged by the magazine pages ye see, but also perhaps to some extent by the choice of musicassettes that have been assaulted by the hands of Senor Turdoo…Shirley Bassey, Charlotte Church, Nana Moskouri are among the celebrity victims of this demented stalker in sound…some might read that enterprise as a nasty form of “aural rape”, but I think it’s more like a demonic possession, an inhabiting of female bodies…not to say that is any more wholesome…also a concerted effort to erase and wipe out all forms of bourgeois good taste by any means possible, dubbing over tapes of Mum and Dad music and effacing printed information from record company by means of blue magic marker…two enemies disposed of in this way…the second tape is also hard to identify like any good criminal renegade walking abroad should be, but the word UR is ensculped in middle of the case…would be possible to read title as 90-O-UR-O-A if wrecked on strong drink at time of scoping…it contains subtle but unsettling looping and murmuring effects, quickly degenerating into a pile of echoed and uncertain wail-noise that can freeze the hearts of strong men, many of them blanching or fainting at the prospect…continuous noise with scads of ghastloid vocal elements, which may morph at any time into a devilish prayer or chant, and certainly no good is boded if screams on tape are evidence of anything…now let us turn to the Cassette Psychic item for ear-trial….of course I was not a subscriber to the plan so Darren the Monstro sent me the Shirley Bassey palimpsest on his own account…wrapped in silver foil…note title inside scrawled in blue biro and torn from notebook of a muttering loon…it is disturbing to hear…again surprisingly at first a departure from the intense and caustic noise wall which previous outings from the Northern climes may have prepared us for…instead a low-key and muffled sound disguises some potent and radical tape experiments with voice, echo device, electronic oozings…still a foul and unpleasant experience, reaching into this bucket of earwigs, worms, and other garden effluvia…what will my hand touch next?…edited and hashed up for maximum disorienting factor, one illogical splice after another, baffling documents and sleep-talk wrenched from the mind of a four A.M. insomniac…at times almost comic, but instantly warping into grotesque and amateurish anti-art, with distorted microphone effects and vari-speeded effects, trivial fragments of sound that even the most hard-bitten cassette band of 1982 would have distanced puny selves from…is this making sense? It is unmaking sense…these scrawls and doodles on magnetic tape could be secret messages intended for your ears only, if you can realign your inner radio antennae onto the wavelength. By writing “Stuff For You” to me and drawing red witch on verso, Darrenacious has succeeded once again in casting the runes on me, sealing my doom.