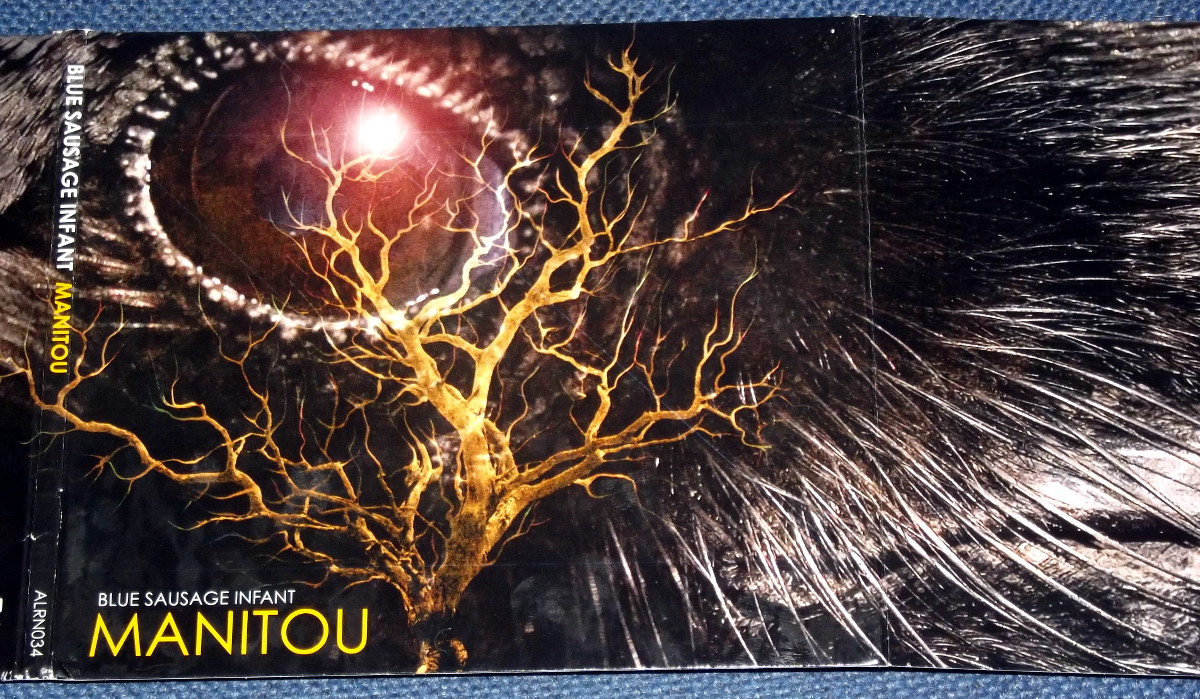 Manitou (ALREALON ALRN034) by Blue Sausage Infant arrived here 21 May 2012. This is the gifted instrumentalist Chester Hawkins of Washington D.C. joined by various friends and collaborators, whose additions grace what I take to be a largely solo LP with a production by Robert L. Pepper of PAS…Hawkins here performs a fine balancing act between wild and divergent emotional states, at one moment thundering against the world with his almighty musical bombast, at others wandering abjectly in a self-imposed mental quagmire of unfathomable proportions…I think at times he is more genuinely “surreal” in his strange music than the oft-referenced Nurse With Wound, plus Hawkins creates much more full-bodied and convincing music with his multiple boxes, keyboards, guitars, and baskets of noteworthy fruit. In terms of mental hysteria and relentless sense of inescapable dilemmas hemming you in, turn to ‘Hosebag’ and ‘The Moss Takes Over’, both powerful examples of how to structure a track such that it accumulates energy and mass in a tightly-wound fashion, on the brink of spinning out of control at any moment…a motorised rickshaw on a very narrow metallic highway being pulled by a robot with hydraulic legs…said legs growing longer in their reach with every second…Hawkins here provides good object lesson in how to drip-feed us the excitement rations, all music sewn up in a cloth bag where the drumbeats are strict, martial and cruel, presenting a force with which we cannot argue…

Then for more tender or ambiguous mood, turn ye to ‘Abdominal Frost’, an almost lyrical barrage of droning synth drift likewise planed together in plywood layers which hovers over your head like an angel of black snow; and for reprogramming that lost nightmare state your body craves in the small hours, ‘How To Achieve Somnambulism’ is the correct prescription, one of the few tracks to make sparing use of sampled TV voices (a cliché fer sure, but handled here with expertise and assurance) to create a short but troubling vision of tall manlike beasts wandering among us, snarling dogs or human bears, Bigfoot scenarios clouding all your dreams…Hawkins finds lyrical beauty in paranoia. Unsurprising to find that the noble Jeff Surak, a past master of cultivating evil mind-flowers in the greenhouse of the soul, contributed to this track with the notable credit of “turntable bacon radio”. We also gots the epic ‘Yggdrasil’ which in tone and tenor could match wits with any given slab of proggy Euro-synth vinyl from 1979 or 1982, while limning an accurate portrait of a Max Ernst decalcomania landscape populated with uglified monsters and nocturnal blooming plants secreting drug-like vapours.

The potential hit single track for anyone’s money ought to be ‘Catoctin’, a confident Krautrock pastiche aided by the guitar of Jeff Barsky and the drumming of Jason Mullinax, where the steady axe-riffing is undercut by a moany spaced-out keyboard wail approximating the tin-man rebuild of Damo Suzuki’s voice, an effect many lesser teenagers have been aiming at for years. As you recall both of these fine musicians played on the title track of BSI’s Negative Space LP from 2011, which we noted here. One should also give mention to ‘Aphid’s Lament’ as just a wonderful slab of grisly half-melodic noisy gumlike texture, and ‘Sodom Is Risen’ as another example of how Hawkins updates and enriches the monotony and drudge of 1980s Industrial Music in his imaginative manner. A beautifully crafted and well-honed album of beat-driven electronic music and heavy drones, redolent with tasty mental knife-twists. I would imagine it’s one thing to tramp into a studio and let your guts hang out through spontaneous primal-scream and abstract expressionist type malarkey, but Hawkins plans his taut compositions meticulously and performs them ruthlessly, as if working to a map. The results are like eating solid lumps of compressed hallucinogenic brain tissue.