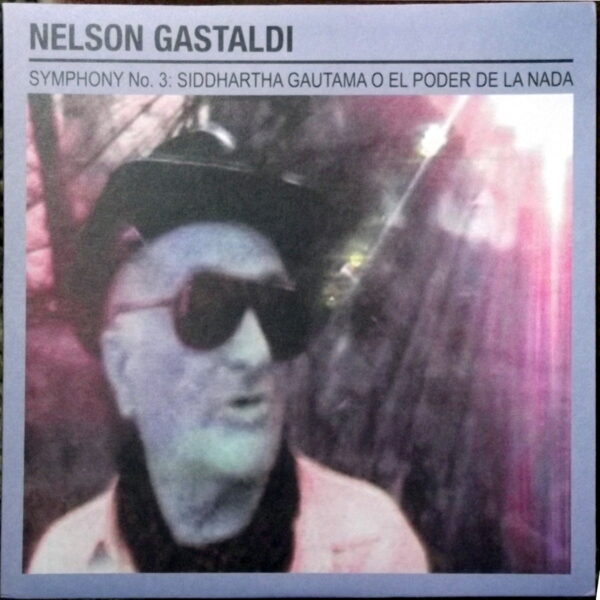 Symphony No 3: Siddharta Gautma O El Poder De La Nada (ROARTORIO ORAR 24) is a decidedly unusual and beautiful album which showcases the unique music of Nelson Gastaldi. Hearing it “blind” is enough of an experience. Something very puzzling about the recording quality. Maybe something to do with cassette tapes. Light distortion, distanced. The music is very layered, and the layers don’t quite match up. Like hearing one melodious fugue piled on top of another as if by random methods, or seeing superimposed photographs across different time zones. Swirling drones which we later learn are mostly processed sounds produced by keyboards, yet come across as clean and organic as though they were played by acoustic instruments. String sections from another dimension. Odd percussive interpolations that follow no obvious logic, yet appear as naturally into the vista as jackdaw or toucan cracking a macadamia nut while we’re listening out in the jungly wilds. Above all the persistent sense that we might be dreaming this music, making it up out of our imagination rather than hearing anything real. How many composers or musicians have aspired to creating that particular impression in their listener’s mind? Thousands, probably. Yet these three suites in this unusual symphony come close to it, patterning whatever underlying score or composition method there may be on the random logic of the unconscious mind.

We’ve got a sleeve note written by Roberto Conlazo, one of the original “unholy three” who created the Reynols madness in the 1990s. Anla Courtis was another of that trio, and he’s involved in the story too. Conlazo used to run a music school in Buenos Aires, and Nelson Gastaldi showed up there one day, leaving after a brief exchange about keyboards. Later Gastaldi met both Conlazo and Courtis by chance, and after a long talk about shared musical interests they had no hesitation in claiming this man as one of Reynols’ spiritual ancestors. Later still, they managed to interview him and have the results published in San Francisco’s Bananafish magazine, once the printed haven for far-out musical oddities of all stripe. If you like reading far-flung tales about strange visions and the power of ritual, it is certainly worth seeking out a copy of this text. Luckily it’s available on the label website. It persuades me that Gastaldi can probably be aligned with the magical-realist tradition of South American writers, like Borges and Gabriel Garcia Marquez.

One of the nuggets to spill from his mouth indicated that Gastaldi had a horror of all that was mainstream and successful in art, particularly music festivals, art galleries, and media coverage. He tended to see the dominant culture as a trap, a factory which just created “more of the same” and “parasite music”. This may account for why his own music has been kept out of the public eye for so long; perhaps he was a deliberately self-exiled Outsider. Like Charles Ives who worked in insurance for most of his life and kept unpublished scores in his desk drawer, Gastaldi worked for an electric company in Buenos Aires for most of his life. Only since his death in 2009 is the information and the music beginning to emanate out into the sphere of attention. Would he be happy about this? I’m always struck by the reaction of Henry Darger, whose secret cache of writings and artworks was discovered in his flat towards the end of his life, a revelation he was powerless to prevent. His reaction on hearing the news was one of unmitigated horror; the worst had happened.

We’d probably want to move back one or two notches from that end of the purist Outsider Art scale when accounting for Gastaldi’s music. After all, Roberto Conzalo was invited to the composer’s house and was extremely pleased to witness the bare-bones setup used by the artist to realise his music. Very basic tape recorders, cheap keyboards, some actual acoustic instruments including violin and trumpet, and lots of toys and percussion devices. It doesn’t take an expert to realise that the genius of this strange music is all in the imaginative power of the creator in this case, the resourcefulness that could make art out of almost anything; I am reminded of Joseph Cornell and his well-ordered boxes of cuttings, objects and commonplace found items that were reorganised into three-dimensional statements of profound beauty. This is one reason I always get so bored and fed up with electroacoustic music made by prize-winning composers in Canada who have expensive studios, keyboards, filters, computers and lavish effects at their disposal, yet what ends up on the grooves of their releases is boring, lifeless, academic tripe, for all its rich surface.

My own predilections in this area lead me to favour work like Gastaldi’s, which vibrates and floats with its own understated raw, uncooked energy. The work has been digitally restored from the composer’s home tapes, which makes me wonder if the wobbly tremor effects are part of the intended work or part of the restoration process. Either way they work beautifully. Lastly we have the title which may or may not be referring to Siddhartha, the 1922 novel by Herman Hesse. I was advised to read this book when I was 16 but I found it dull and unengaging, and since then have always remained unpersuaded by tales of spiritual illumination and self-discovery. I’m more attracted to the second half of the title, El Poder De La Nada which translates as “The Power of Nothing”. While Gastaldi’s music here may have some trace elements which put one in mind of the swirling mandalas of Popol Vuh or Between, there is also a very eccentric trajectory that causes the music to meander as inexorably as a huge river, cutting its way through inhospitable turf. From February 2012 – sorry to have been so dilatory in noting this release, but I find it is still in print. Recommended.