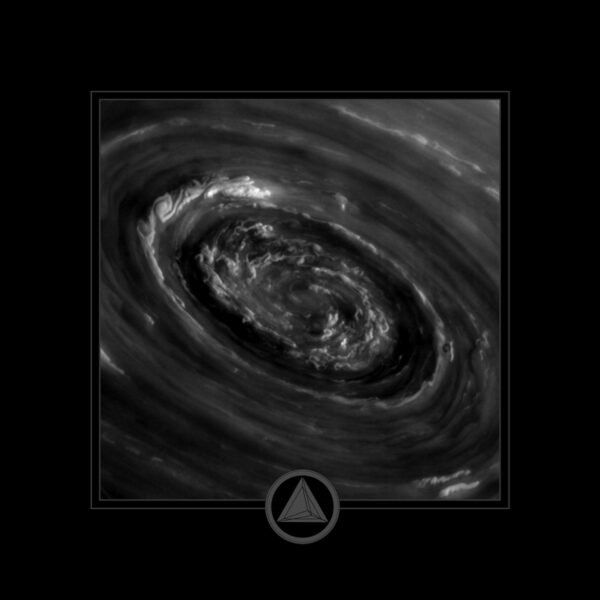 Fell Voices is a black metal band based in Santa Cruz (California) but often associated with the Cascadian black metal scene (northwest US / southwest British Columbia, Canada).  “Regnum Saturni” is the first album of theirs that is not named after the band or left untitled; the band has a demo and two previous albums that went without titles, which would have caused some discomfort to distributors and fans alike. Especially as songs on previous albums also had no titles! Well, on “Regnum Saturni” those little problems have now been fixed: the songs that feature now bear titles which together suggest a theme of transformation from a lower level of existence to a higher one. Listeners may well be divided over this release: whereas previous releases had definite melodies and riffs, this album may come across as unstructured and intangible, and the music appears deliberately difficult and remote. Life is not easy when you’re under the spell of Fell Voices!

All three tracks are long and on the double LP version each takes up one side of the record. This means that Side D contains nothing at all. (One would think at least it might have an interesting recording of forest bird and insect noises.) Opener “Flesh from Bone” tiptoes in quietly for a bit before suddenly plunging listeners into a roaring whirlwind of sharp guitar noise which pulses with a grinding chainsaw rhythm. Vocals can barely be heard unless they are wailing or screeching in agony. Yet the music isn’t an endless self-indulgent exercise in black metal noise drone and chaos; there is change from noise and anguish to passages of stillness and solitude, dark though they are. However such interludes are soon swept aside by more scourging music from which lead guitar riffs might arise and glimmer briefly before they are engulfed in the fierce storms.

We segue into Track 2 “Emergence” with the faintest of breaks but the mood and energy level remaining low and restrained. Soon we are tossed into a long extended black metal noise drone world, one featuring a wavering feedback drone and constant repetitive drumming. The effect can be very hypnotic even though the mood is far from serene: in fact it’s aggressive and hostile. Voices scream in pain and torment continuously, guitars wobble as if sharpening their strings on whet-stones and the percussion continues its banging rhythm without rest. This time there’s no let-up, no rest from the torture. Towards the end, the percussion becomes more thunderous and emphatic, voices still scream and the heaving guitars hang over the track.

“Dawn” is a powerful thundering track of attacking percussion and denser-than-ever clouds of black metal guitar. Whining drone, rousing drums, more howling and keening voices and that ever-present boiling guitar noise atmosphere fill your brain from ear to ear. This is a highly suffocating experience. Although the music overall doesn’t stray from the very straight and very narrow, there’s enough variation in its details to keep some, if not most, listeners tagging along. The best moments come in the last few minutes of the track: the drumming consists of thunderous rolls, the screaming becomes unearthly and the shuddering guitars assume a quieter air as gradually the track loses its pent-up fury.

The album can be an exhausting experience to hear all the way through and perhaps there was no need for it to be so long at 61 minutes. The introductions and codas don’t need to be as stretched as they are, as they are joined with only the slightest of breaks. What is most impressive about the album is its raging intensity and the musicians’ utmost dedication to their craft. They obviously don’t care about pandering to all their fans’ preferences; the music is relentlessly single-minded and its scope is very narrow. The band that springs to mind as a point of comparison is Nadja whose music in the past has been similarly noisy, intense and powerful if unvarying.

I can see this album enjoying fairly limited success among Fell Voices’ fans. I can’t see though that the band is prepared to return to a more melodic and less underground style.