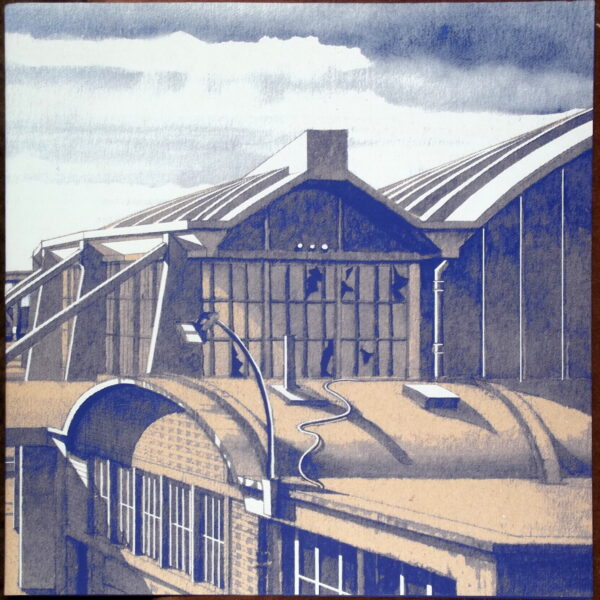 Ressuage
Semelles De Fondation
FRANCE BLOC THYRISTORS VINYLE 0090 / BIMBO TOWER RECORDS 017 LP (2011)
Another nice French vinyl from the Bloc Thyristors label. The drummer Jean-Noël Cognard kindly keeps sending me these records and I’m sure there are least two more unopened items from him awaiting me in the backlog. The presentation of all of these Bloc Thyristors records is just so sumptuous. Thick card foldaround cover with silkscreened artwork by Marc-Antoine Beaufils, using subtle colour harmonies and combinations. And it’s pressed in light blue vinyl for that extra sky-blue flavour that dogs go for. The music on the grooves is a lively mix of jazz, improv and intellectual art-prog performed by under-rated geniuses and played on woodwinds and brass with a traditional bass and drums backing, plus additional modern-ness injected by live electronics and laptop. These tunes veer from gloomy dirge (‘Portiques Indéformables’ is a splendid plaintive groaner) to lively Miles Davis styled romps. Instrumental lines coil around each other like fast-growing tree roots, throttling each other until the sap flows like wine. All players have developed a very expressive sound, punchy and juicy, be it the bassist Benjamin Duboc with his well-rounded slaps or the clarinettist Michel Pilz murmuring like a fluent Venusian reptile in heat. Very sensual playing like painters smearing their daubs for the sheer delight of colours and light. I particularly like ‘Les Travées Basses Des Façades’ as a simple duo set between clarinet and bass (later joined by drummer), but the full band experience on ‘De Béton Et De Verre’ or ‘Pré-Tension’ is also exhilarating. And pre-tentiousness is something these Frenchers are not afraid to be accused of, even as they occasionally hark back to 1980s Rock In Opposition or 1970s French prog in their eclectic playing. 2010 recordings made in the Pierre Schaeffer studio. Probably you can get a copy of this from the Bimbo Tower shop in Paris.

Ryu Hankil / Hong Chulki / Nick Hoffman
Sonne
USA PILGRIM TALK PT20 LP (2012)
Some vinyl overlooked since May 2012 from the Pilgrim Talk label. In these quarters we like Nick Hoffman and his many low-key projects which cover quiet improvised music, Black Metal, and power noise, but are mostly quite hard to classify. We also like the way he doesn’t boast or gab loudly about his achievements. This vinyl is also unassuming in spite of its freaky, bloodthirsty cover image, and the music resists simplistic appraisal. Sonne documents a trio comprising Hoffman, Ryu Hankil, and Hong Chulki and was recorded in Korea. American Hoffman is actively engaged in a hands across the water programme with Asian improvisers. He’s done more for Korea than the United Nations Security Council, that’s for sure. Both of the young Korean players here have moved away from their respective pop group / rock band beginnings, and taken turns into their own form of weird and far-out exploratory improvisation, one of them inspired to do so by Otomo Yoshihide. Now they both make odd noises with electrical devices, Chulki in particular choosing to subvert normal functions of his various playback devices. This shortish slab of vinyl has many of the label’s hallmarks, being decorated with old engravings and Hoffman drawings that invoke Satanic, morbid or esoteric themes, and the music itself is not explained at all. All we know is that it was recorded in a former industrial complex of some sort. Intentions, ideas, role-playing – even a simple instrument list – all of this contextual detail is denied to us, leaving us face to face with the stark void of strange and haphazard-sounding crackles and rumbles, interrupted by clonking percussive strokes. I much prefer it this way and while the music may occasionally appear baffling, boring and pointless, it is also very honest and has a rawness that is very bracing. For my previous speculations on the unique qualities of Pilgrim Talk releases, see this post. Limited pressing of 108 copies!