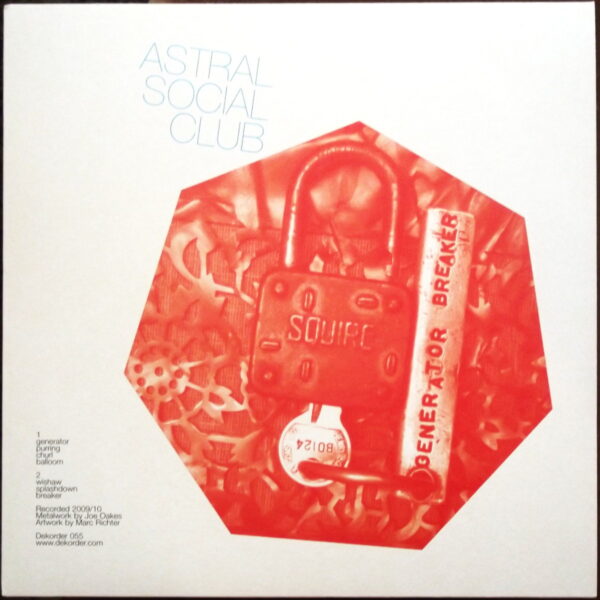 I think we last heard from Neil Campbell / Astral Social Club as one half of Iibiis Rooge, a duo who produced an extremely trippy and de-centred experience of cluttered dronery for Dekorder around 2010. Fans of that LP should tune in to Generator Breaker (DEKORDER 055), a 2011 solo record by Astral Social Club, but it’s frankly hard to believe it’s just two sides of 33 RPM groove, since there’s probably enough information and layering packed into the wax here to fill at least a triple album box set. It’s thick and dense as lead-lined marmalade…Astral Social Club’s method, if I can attempt analysis for a second or two, is to blend drones, rhythms, melodies and beats in ways that should not really work, as if creating a three-dimensional art painting on sheets of perspex in a deserted aircraft hangar, with results that magically always look fantastic no matter where you’re positioned as a viewer. Even Ellsworth Kelly woulda turned in his shingle at that. High sounds, low sounds, big bass and tiny tinkling details – enormous ranges of aural saturation are welded together with great craft and skill. At moments during this album, when the layers slightly shift and drop away leaving us glimpses of other source materials through little sound-windows, I was reminded of Lou Reed’s Metal Machine Music, a record which for ages had a reputation of being merely random noise when in fact (as was recently uncovered) there are speeded-up tapes of a musical sort shrieking their heads off inside the chaotic and inhuman mixture. Astral Social Club ain’t inhuman though, and to be sure he makes highly compassionate and luv-enriched droneathons fit for listening by happy humans. But he also flirts with chaos in an exciting way, accreting his layers and additions until you think the impossible structure can withstand no more weight. Then he puts a dollop of whipped cream on top, and amazingly the gigantic sonic sundae still stands, wobbling its way to your table. I never heard any of Psychic TV’s excursions into Acid House dementia in the late 1980s, but I would like to imagine they were as thickly intoxicating as these brews. (03/10/2011)

Last noted the talented Ashley Paul in January 2012 with her single for the Emerald Cocoon label. It’s a pleasure to receive Slow Boat (ORANGE MILK RECORDS), a full-length album of songs. She sings and plays all the instruments, apart from some assistance with percussion from Eli Keszler. Once again she produces an opaque, poetic and deeply personal statement, entirely on her own terms. I enjoy her approach to music very much, although I can also see how some listeners might find it somewhat challenging listening. It’s very hard to make out the words she sings, the album proceeds at a very slow pace, every note played seems uncertain and vague, and there isn’t a recognisable melody in sight within this brittle atonal zone. But these qualities are Ashley Paul’s strengths. She is pushing herself out on a limb the entire time, working hard to refuse any sort of conventional sound or over-familiar turn of musical phrase. She has distilled her work – both words and music – to an essence, where nothing superfluous or unnecessary remains. While this might lead her at times to appear mannered and stilted in her vocalising, you only have to listen for three minutes to discern the absolute conviction of this artist. Net result is an album that, in terms of its sound, is genuinely unique and original. If so inclined, you could separate out some of the sounds and find consonances with minimal avant-garde jazz in the clarinet and percussion effects, but soon other weird sounds haunt the track and you’ll find that comparison will not stand for long. What is Ashley Paul’s message to the world? I think it could be summed up as “life is uncertain”…1 the cryptic and allusive lyrics she mouths so hesitantly are one clue in that direction, and another clue is the still-born caution in each performance; every track is performed by a frightened steel-wire puppet, not knowing where the next step will lead. And the abiding atmosphere is underpinned by further groans of unknowing from the percussion section, which is sometimes capable of yielding a heavy sigh that makes you think the world is about to end in five minutes. In all, I really do think Ashley Paul has many profound things to say, but she herself isn’t entirely sure what they are; so she works out her uncertainty in public, on record, taking baby-steps out of the comfort zone and into the bleak world of unknowable powers. She makes music to find out why she wants to make music. 2

Vapor Gourds has made an entertaining and innovative record called Dagger Magic (FEEDING TUBE RECORDS FRT086). If lo-fi and raw electronic mish-mash are elements that feed potassium to your inner plant life, then seek out this marginal curio and plant it in your flowerpot. This first came out as a cassette in 2008 and has now been repressed as a vinyl item by the Feeding Tube Records label, keen to spread the waywardness a bit further than the original broadcast. Jake Meginsky is Vapor Gourds, and also works in Slaughterhouse Percussion and X.O.4, beside being a percussionist, DJ and sound engineer. Dagger Magic is very much an assembled album, rather than a performed one, but it’s hard to tell with any certainty the tape loops and samples from the live electronic components, if any. I enjoy the rough collaged edges and slightly mismatched elements, giving Dagger Magic the lively feel of a thrown-together experiment instead of a product that’s been cooked to death through overdubbing and studio technique. Some tracks work as a form of minimal dub-electronica, all tasty micro-melodies and snappy beats; others are inchoate noise, barely responding to the rule of the “near-subliminal pulse work” that is laced through the album; much more of it is impossible to identify in any way. It all adds to a distinctive, tinny, barely-works flavour; no wonder the label invokes comparisons with Voice Crack on that account. I like the honesty and simplicity of Vapor Gourds on this outing, he has the spontaneous creativity of a sculptor working in coloured plasticine, whose lumpy figurines instantly harden into silver-plated miniature robots.