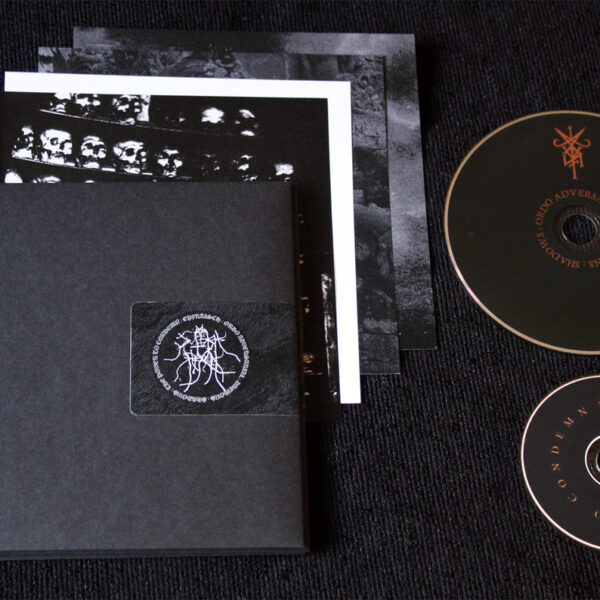 Black metal / noise duo Sutekh Hexen have gathered together into this compilation past singles and a live recording that span a 4-year period from 2009 to 2013. A very harsh, bleak and severe collection this proves to be right from the first track of BM guitar / percussion rhythms all smeared over with high-pressure hoses of relentless noise wash-out. Early tracks on this recording are black metal / noise fusion in style, heavily reliant on tremolo guitar flutter rhythms, heavy and insistent thumping beats, and distorted BM vocals. More snippets of an enormous blackened noise soundtrack than actual self-contained pieces with definite beginnings and endings, the first three tracks describe and guide us through a sinister scourged world of black hell.

Later pieces tend towards experimentation with elements of rhythm, texture and tone so while the music is still forbidding and ominous, the BM tendencies are much less obvious and provide backdrop and inspiration. Something of a sombre and epic movie soundtrack feel, heavy and brooding in atmosphere, comes to the fore on “Have You Seen Your Mother, Baby, Standing in the Shadows?” before the heavy roar and pummel start up. The live track that finishes off the main “Empyräisch” disc is a mostly ambient noise affair: the emphasis falls on a huge roiling cloud of black noise, massive and continuously evolving, with a shadowy malevolent presence. The juddering, scraping and sometimes screeching flow of music ploughs down everything in its path, growing ever larger into a black monster.

A separate mini-disc “The Power to Condemn” comes with the compilation. Packaging being in the form of a plain black envelope with a seal containing the necessary identification for the CD, it’s quite fiddly to pull out the discs and you end up tearing or ripping something that you need to know to identify what you’re going to listen to. (AAARGH!) The bonus disc is even more experimental than its larger sibling: ambient hiss and sigh provide a steady rhythm and a flowing direction to hollow-box fumbles that might have a loose screw or two and which are touched lightly by echo effects. Parts of the track can have a mesmerising trance effect. The piece becomes more interesting after the halfway mark with deep rumbles surfacing from far below and mighty majestic drone-guitar riffs that burst out of the blackness and at once dominate proceedings. A rift in the darkness springs open and turbulent space ambience quickly fills the void. The music is driven by two conflicting forces in a deadly dance towards what one imagines should be an intense resolution.

The mini-disc is definitely worth the price of admission to SH’s vision of dark ritual worship though the main compilation is not bad if perhaps a little uneven. That’s the problem with compilations of music spanning several years: early music may not be quite as good as the later music (or vice versa in the case of some artists) and you sometimes feel the artists should have just re-recorded everything in one go. After hearing the whole recording  including the bonus disc, you can feel like you’ve been put through 90 million years of evolution in the space of an hour; returning to the early SH tracks, you get a sense of what the world was like immediately after the dinosaurs met their maker. There’s a fair bit of variety in the music across both discs though the tracks take their time to reveal their treasure. Patient listeners will be well rewarded. If you cannot find any other Sutekh Hexen recordings at your local friendly neighbourhood corner record store, this is the one to get.