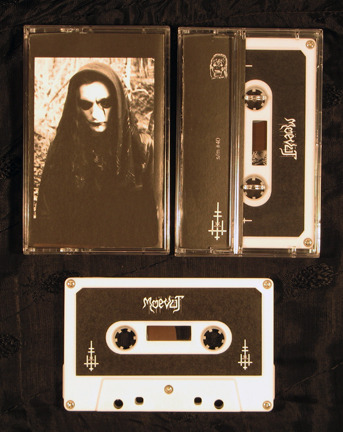 As far as I know, this tape collects everything that was done by the one-man French Black Legions project Moëvöt in the 1990s. Moëvöt was one of the more distinctive Black Legions acts, eschewing raw black metal tremolo guitars and drums to be a completely black ambient entity relying on mood and melodic but fragmented minimalist song structures to convey the artist’s particular view of the world and humanity. There’s very little information carried on the cassette sleeve about the music – the number of tracks and their titles are not printed – so I’ve listened to the entire cassette as if it were a massive one-track soundtrack to an imaginary impressionist movie. The music actually stands up to that treatment: there are long pieces and there are short ones as well, most of which are repetitive and appear to go nowhere, describing perhaps a scene in some detail in a particular point of time or in a nouveau roman narrative.

As a whole, the music often has a camp horror quality especially during those songs dominated by raspy BM-styled vocals that chant a dark Satanic litany. Passages of dread, sorrow, despair and desolation with slow music and choirs of pure-toned though anaemic voices are threaded throughout. Musique concrète elements appear and there is experimentation with different sounds and tones to achieve particular moods and a growing sense of dark horror. Singing can be near-operatic on a number of tracks and this helps to strengthen the music’s ominous horror.

Quite a number of synthesiser-generated effects are deployed here, making for a work hard to pigeon-hole with labels: a black metal sensibility does exist but the music also aspires to a Gothic-Romantic artistic level which includes mock horror opera and arty kitsch. As the album progresses – by the way, I’m not assuming everything has been assembled in chronological order – violin and cello join the fray, and sounds that blend voice and keyboards or strings are sometimes hard to pick apart. More experimentation abounds: a creepy Whitehouse-like track composed entirely of trickling water, scraping metal and a woman’s panting breath appears along with other strange noises that come and go. One other track seems to be all wandering bass guitar melody.

Other Black Legions bands may be more raw in sound, louder, angrier, more energetic and better known but the Moëvöt man, playing out a weirdly complex movie of Satanic ritual horror and artistic and intellectual pretensions and aspirations from his overactive imagination, may have carved out a unique if barmy underground cult status for himself and his project.