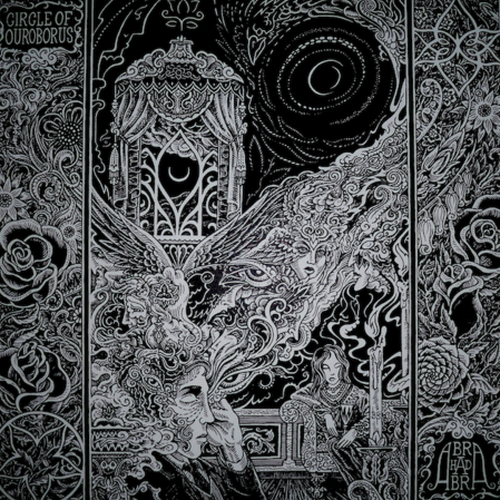 One of my favourite Finnish bands, the black metal / shoegazer post-rock duo Circle of Ouroborus has been prolific over the last several years and in 2012 alone released two studio albums, several EPs, a split album and a compilation album. “Abrahadabra” is the second of the two studio full-lengths; the title is a reference to the musicians’ interest in the occult and magic, the word being made up of one vowel appearing five times and six consonants, making a total of 11 letters. (In 2011, an album “Eleven Fingers” was released.) The recording under review sees CoO in their melodic dark depressive black metal pop mode with plenty of despair expressed in the lyrics. The band’s style just about bleeds melancholy and a dark feeling of foreboding: the music is often very doomy, vocalist Antti Klemi half-sings / half-chants like a lone Cassandra warning of trouble ahead and the texture of the music and instrumentation has a forlorn air.

The sound of the album is less muddy and steamy than some of the band’s previous work and the drums are actually very crisp to the extent of dominating the music at times. Klemi’s voice, touched with reverb as ever, still sounds awkward but he hits the notes spot-on. The guitars have a slight buzzy sound but the clouds they form are light.

To be honest, no great melodies or riffs hit me on the first hearing and it’s with subsequent repeats that the album’s charms start to dawn on me. “These Days and Years to Kill” is a cry for understanding and empathy if not for help, and on this song at least Klemi finally finds an emotional depth and range in his singing that took a long time over the band’s career to coax and nurture. “Remembrance” is a slower, heavier, doomier track and might be the most metal-sounding song. “Six Hands” has an otherworldly air: Klemi’s voice is dreamy and almost floating away, and the entire song, starting with the beguiling long introduction, is urging listeners to drift away into a trance with it. For once there is a backing vocal as though Klemi’s soul has split into two and a part of it is already advancing into a realm of non-existence.

A couple of reviews I’ve seen rate “Like Silent Meadows” highly and it has a good riff in parts but otherwise it seems no different from the rest of the album. “Dementia Praecox” is the album’s longest track at 9 minutes and it’s more distinctive than the others in its rhythms and beats

I’d rate this album as fairly good but not near the band’s best. Klemi’s singing is sometimes monotonous across songs and the minimalist style of music basically serves as backdrop for the singing and lyrics. The dark melodic post-BM music rarely ventures away into another music genre. Still, CoO followers are nothing if not a devoted bunch and the band’s releases always sell very well so if TSP readers are keen on buying this album, they had better hit the Kuunpalvelus link quickly. The album cover artwork has a dreamy, mystical appearance that might have a secret message behind it.