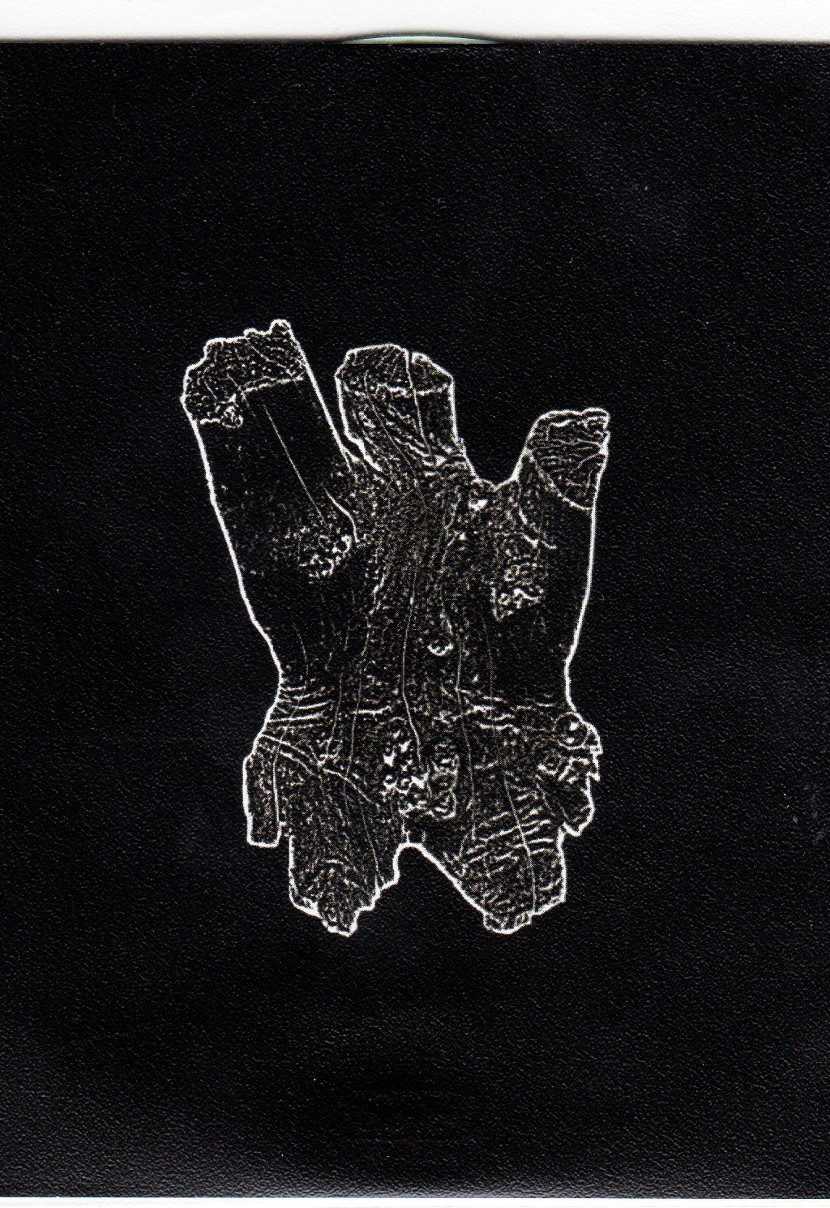 A blackened stump emblazoned in the centre of a black cover, apparently the inspiration for the group name, a homage to that most eldritch and sinister of beasts, the woodchuck and the fiendish rhymes associated with it.

35 minutes of empty and blackened music pass by like wisps of some decaying cerement, mournful and minimal wraith-like guitar figures accompanied by strained and awkward vocals as if the vocalist had forced down a nutritious but dry breakfast of bark chippings. Spindly guitar notes are left to ring out and decay in a way that, through a glass darkly, recalls the Spaghetti-Western-referencing licks of hoary and ghoulish post-rock touchstones like Tortoise or Labradford.

Under guitar parts like bare branches and twigs knocking together our Vincent Price-esque vocalist roams, spiritually tortured, disgruntled, wrapped in black and noisome rags, over the forest floor. A dank atmosphere seeps past tolling bell-like guitar tones carrying with it the petulant spirits of mouldering leaves who whisper to themselves snatches of gothic poetry across the gloomy wood as they pass. Shadows, and – weirdly – the shadow of Hank Marvin, flit through our haunted and crepuscular copse. There is a sense, as well as of lurking camp, of lurking menace, impending distortion, of something stalking behind rotting tree trunks, or at least behind humming practice amps. The threatened explosion never occurs, though, wind rustles and sighs and the threat passes, creeping away like the Green Manalishi, just beyond sight.

Sometimes the album seems an extrapolation of the obligatory atmospheric instrumental usually inserted into blockbusting 80s metal albums to demonstrate conventional musical prowess and provide moments of respite (this category includes tracks incorporating bastardized references to the Great Old Ones). Happily any sense of bombast leaking from this source is effectively diffused by idiosyncratic production touches, plenty of negative space and a pleasingly ramshackle air. Overproduction could easily have swamped this, but for the most part it remains aptly sere and ragged, allowing the mind to fill in the details. Don’t get the impression, despite the references and presentation that the music is heavy, per se, the heaviness is always implicit, what is recorded is spare and restrained.

The twangy touches remain an unusual ingredient; whilst the album would function as a soundtrack for a dream quest through haunted (and woodchuck infested?) woods such as that undertaken by Randolph Carter, often as not, rather than in Unknown Kadath, you will find yourself by some infernal trickery approaching a gothic, doom-laden horse opera territory. The band being fellow countrymen of Morricone this makes some poetical sense, it does however leave one with the incongruous image of Howard Philips Lovecraft in a Stetson, perhaps fraternising with Johnny Cash. Nevertheless this stumpy plastic missive may well be a useful listen in a lichen-encrusted hour when wishing to evoke a miasma of arboreous atmosphere. Could be a grower…

Boring Machines
Avant! Music
Hear a track on this podcast