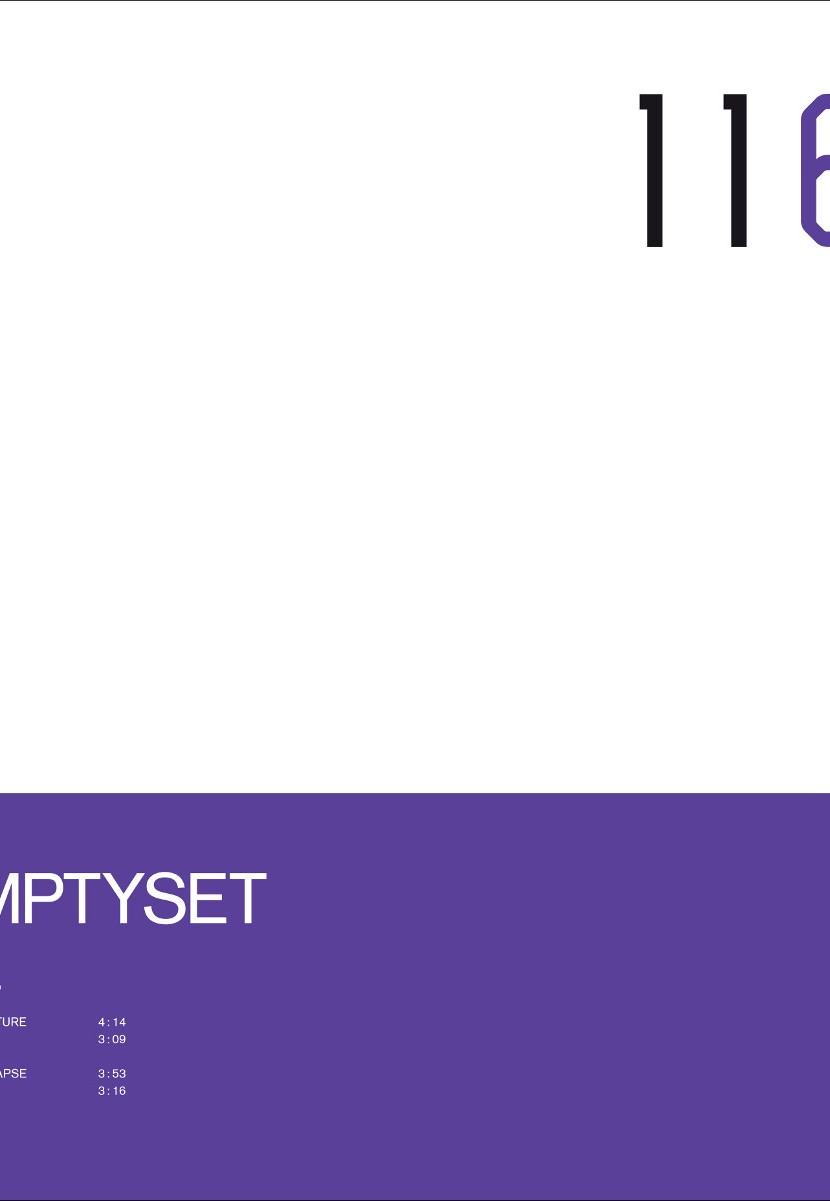 Of the new music to have emerged from Bristol over the past few years, Emptyset are among the most agreeably non-linear in their appropriation of ‘urban’ and ‘electronic’ motifs; eschewing the present predilection for wobbly, bass-heavy, dubstep gene-splicing, and focusing fixedly on conjurations of collapsing structures in (un)real and reverse time; depictions of dark thresholds that stretch and distort the vanishing point, the way manga artist Nihei Tsutomu envisions vast, abandoned concrete structures that expand and extend exponentially, flouting laws of gravity and inclinations to disintegrate.

The four tracks on this 12” pithily epitomise both Emptyset’s and the label, Raster Noton’s music. Every track is a concise, clinically precise blueprint of an impossible structure: woven of webs of densifying white noise, pearled with gleaming glitches, enveloped by mushroom clouds of industrial grind and astral distortion; every track halting the moment it might actually become familiar to the techno-entranced attention span.

The opener, ‘Armature’, takes its name from the rotational component of an electrical motor (or generator), but subtly undermines any sense of regularity as it builds layer upon layer of abrasive hiss atop a stuttering, stop-start battery of Nokia bleeps, heavily sedated snares and a mechanical pounding not unlike the jarring arrhythmia of Portishead’s ‘Machine Gun’. The latter effect is more pronounced in ‘Core’, wherein the listener tears across a no man’s land as slow motion gunfire explodes from all sides in visceral 16-beat measures, which scene is finally abstracted and held to the light; its angles analysed by an unseen onlooker, and stopping sharply at the 3-minute mark.

Martin Hannett might have engineered the mortifying metallic groan comprising the first half of ‘Collapse’, before going into labour to deliver a white noise spheroid into a Terminator landscape of post-android desolation. A greater challenge presents itself in the final track: ‘Wire’, which is the sound of a blurred, mutagen-enhanced invader hammering at a sealed threshold on the astral plane, clouding the atmosphere with miasmic distortion, then resuming the entry campaign with greater violence. The tracks all have in common their relentlessness and a lack of conformity to recognisable form, ‘where a chaotic order emerges out of a resistance to fragmentation and likewise (…) the tension contained within this liminal space of transition’, as the press release aptly puts it.

Claims concerning the ‘crossing of boundaries’ between musical genres are both commonplace and redundant nowadays. Back when John Zorn was taking issue with the mores of musical purists there was more meat to such terms. Emptyset’s concept is subtly different, though one might easily be misled by such adverbials as ‘between noise and music’. In their case, the nebulous ‘boundary’ itself is the site of kinetic tension and exploration, from which arises a distinctive ‘structural grammar’ that references, revises and (im)personalises many familiar sounds and styles. Thus, while these four tracks are ultimately variations on a theme, it remains a highly distinctive and hitherto little-dabbled-with one.