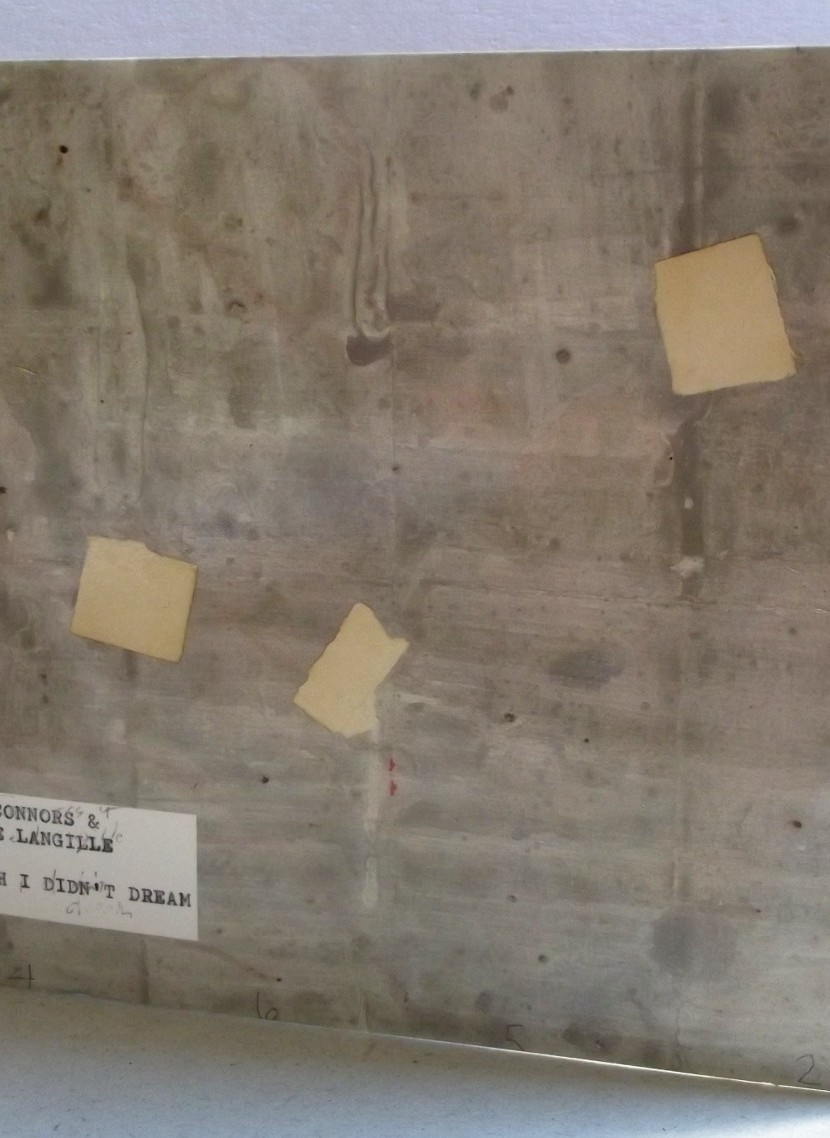 The plaintive cry of Loren Connors and Suzanne Langille is I Wish I Didn’t Dream (NORTHERN SPY RECORDS NSCD 031), on a highly opaque CD of intense experimental guitar murk and equally plangent vocalising. These short, clipped poem-songs are exemplary manifestations of the Emily Dickinson approach taken to its post-modern extreme – broken images, unfamiliar emotions, and nascent ideas stumbling into the world scarce half made-up. Who better to delve into these uncharted seas than the two talented Americans in this duo, who singly or collectively have been producing musical puzzles for over thirty years, producing a large body of work that’s proving impossible to decode – and the problem only increases when you have obtuse, distanced and frown-inducing releases such as this one. We last heard from them as two-thirds of Haunted House, a group producing the wonderful Blue Ghost Blues for this same label in 2011, whose hard-rocking and lengthy guitar noodlings may well have struck a chord with all good lovers of avant axe-excess, but this particular sleep-talking mystery bucket of murmurations and unfinished utterances is quite another brisket of bones. The guitar meanders and squeaks, producing icy cold tones from a meat locker situated thirty miles from the studio. The vocalist is closer to hand, her urgent whispers magnified in a small echo chamber, but her cryptical half-sung sketches – fleeting portraits etched on a frozen window pane with a dusty twig – will have you straining to catch the implications behind each intimate gasp. This is blanked-out, impenetrable minimalist art music of the highest water, a more austere version of Annette Peacock and Joni Mitchell running across the snow with the distorted and attenuated guitars of Japanese ghosts in pursuit of their threatened souls. It also comes with a booklet of stark abstract paintings by M P Landis, completing a package that’s guaranteed to confirm everything you ever suspected about the emptiness and futility of life. Gradely! (01/11/2012)

Another American who, I suspect, is no stranger to staring the Gods of futility in the eye is our good friend Nick Hoffman, the sullen and stern genius who utters little while issuing great but perplexing music on his Pilgrim Talk label. One such batch arrived in November 2012. Cockroach Boy (PILGRIM TALK PT22) is a teamup with Satoshi Kanda, one of his many connections in the steaming continent of the East, and they also made a split cassette for this label in 2010. Kanda has been improvising since 2003 using nothing but an electric bass and some empty milk bottles. Well, he certainly delivers the cream on this recording! It’s one of Hoffman’s “play it and guess” recordings where absolutely nothing is explained and it’s up to the listener to decide when the duo have started or ended performing, and whether or not what they are creating can even be called “music”. Ultra-minimal, confusing, yet it’s full of the unbearable tension that these dangerous situations can often create. Soon you too will be drawn into contemplating these strange tones and lengthy silences, and wishing you were nailed inside a coffin at the cemetery in Fukuoka, where this was recorded. The lengthy title to this 40-minute work, if indeed it is a title, compacts references to demons, corpses and Gods and also retains the air of a schlocky horror movie, in keeping with the grotesque Insect-Fear cover art by Hoffman. I love the way this music consistently refuses easy digestion, and all these Pilgrim Talk releases are recommended. (09/11/2012)

The Polish trio Sonda recorded Sonda (AUDIO TONG AT26.2012) in Sopot, a little town abutting the Baltic Sea, performing in an attic space in 2006. Now released on Audio Tong, it’s an engaging set of music played by the drummer Krzysztof Topolski and the guitarist Marcin Dymiter, with vocalist Tomasz Pawlak “Czaszka” joining them with his husky yawps for three tracks. In their endearingly untidy music, the group make a point of confusing musical genres, aiming to indulge their love of “rock, blues, metal, drone, punk, electronics and improvisation”. Two of the seven tracks are a species of obnoxious guitar grindcore racket that should grease the wheels of die-hard Napalm Death fans, while two other tracks are meandery improvisation of the rattle-and-creak variety, with much emphasis on the metallic resonances produced by cymbals and metal-wound strings. Other pieces are just plain impossible to categorise, although the 12-minute ‘Wszystko Dobre, Co Sie Dobrze Konczy’ has a definite vibe of Can threaded into the sinews of its drumming and electronic drone, making snake-like movements across the carpet with the help of the violinist Marek Dybusc. Competent enough performances, but the trio ultimately lack force and conviction, no matter which style they adopt. Lovely deep sea cover art. (02/11/2012)

Strange furry thing from Jüppala Kääpiö, the duo who brought us Spring Promenade in 2010. Despite their Finnish name this band is actually two Japanese musicians Hitoshi and Carole Kojo who live in Belgium. Rewound Grooves (OMNIMOMENTO OM 07) may be a concept record telling the story of the Krampus, a vicious and hairy beast drawn from Alpine mythology who is associated with Winter and may be the enemy of St Nicholas – a sort of early manifestation of the Grinch. The music by Jüppala Kääpiö is however anything but beastly, and comprises four lengthy and limpid drones of ambient swirlery, all created from numerous layers of gentle electronic tones, breathy vocals and endlessly spinning tape loops (probably enhanced by digital means). The album strikes a thoughtful and contemplative pose, and is generally soothing and positive, with only the third track ‘From Veins To Nebulae’ introducing an element of drama or danger. Somewhat diffuse and static music, but there is much craft in the Kojos’ sound-generation technique, and they rarely commit a careless or half-baked statement to tape. Besides the fake fur wrapper, there is also a screenprinted band of card which can be worn like a mask. (29/11/2012)

If you’d prefer drone music with more darkness lurking in the corners, then as ever Sum Of R will satisfy your thirst for all that’s lugubrious and sombre. The sounds on Ride Out The Waves (STORM AS HE WALKS SAHWLP001) are produced mostly by Reto Mäder working in the studio overdubbing his keyboards, bass, electronics and percussion, although Julia Wolf (what a brilliant name for a supernatural horror combo like this one) adds poignant stabs from her fatal guitar at chosen stages on the forest pathway. I tend to remember Sum Of R records as an unbroken feast of thick occluded dark ambience, but Ride Out The Waves has a lot more variety and incident than their usual output, each track quite unlike the last, until the LP becomes the soundtrack to a very disjointed and episodic horror film. Said film, if it exists, is characterised by much bloodshed, sabres, and men on horseback cutting down villagers with a pitiless scowl of contempt. Aye, there is still plenty of the characteristic bubbling black tar music which induces fear and misery, but the heavy metal guitar swipes add a very welcome element of tension, plus the spare percussion will appeal to all you hard-boned stoner freaks – just check out the slowed-down battering effects on ‘Alarming’, the truly apocalyptic nightmare that brings the album crashing down into ruins. I’ve always said Reto Mäder should have made a Black Metal LP, but I feel that genre may sadly be in decline now. Even so, Mader should join forces with MZ.412 some day, and the results would be truly monstrous – they could produce the ultimate “atmospheric dread and cold death” album. The photo shows a promo CD, but the release is vinyl.