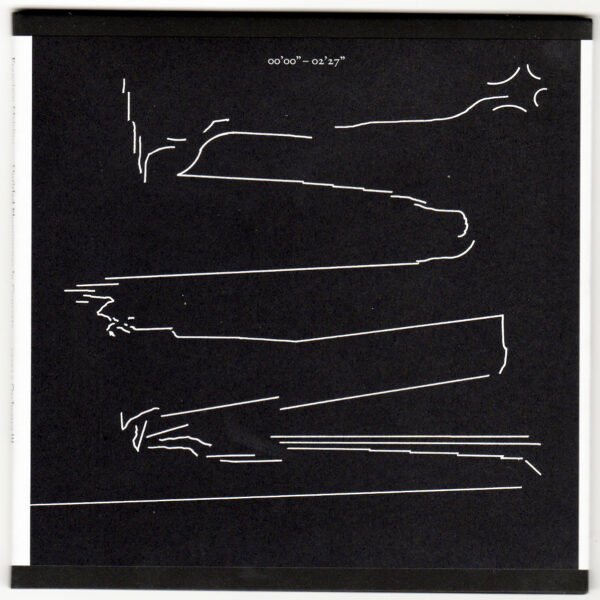 The information about Francisco Meirino I’ve come across online states; “active since 1994 (as phroq until 2009) in sound and live performance, he explores the tension between programmable material and the potential for its failure by working mainly with the computer, magnetic fields detectors, reel-to-reel tape recorders, piezo transducers and various acoustic devices…” So Untitled Phenomenas In Concrete is quite a departure.

It is a composition for UPIC and field recordings (“…recordings of snow falling, bones cracking, magnetic fields and insects”), assembled and mastered by Meirino between 2008 and 2012. The press release tells us “UPIC is a computerised musical composition tool, devised by the composer Iannis Xenakis. It consists of a digitising tablet linked to a computer, which has a vector display.” No doubt there will be an app for your phone that does that soon.

Untitled Phenomenas In Concrete commences with a noise that sounds like an electrical substation being switched on – it happens a second time at 10 minutes 15 and again around 27 and a half minutes after a minute or so of silence. This is an extremely loud and physical noise which made me feel like I was getting defibrillated by means of a strong electric charge. Not quite what I was expecting as I settled down to listen to this disc for the first time with a glass of wine after a long day, but exciting, nonetheless.

Untitled Phenomenas In Concrete certainly runs the gamut of sounds possible with UPIC. Other electronicists fortunate enough to be able to use the system produce, at least to my ears, quite similar sounding work in terms of sounds rather than composition; Russell Haswell, for example… 1

The piece begins with a series of ragged encrypted data files shorn of all rough edges angrily, by plastic surform; bought from Wickes, until they once again come to resemble the real-life sounds they were possibly sourced from. Meirino then delves into pseudo academic software composer sounds, like if Stockhausen had designed Korg’s recent fevered re-imagining of the MS20 monosynth; to put it in layman’s terms, then: avant-garde fizzing noises. Then there’s a passage around 24 mins where Meirino lets loose a subtle theme that puts me in mind of Mogwai’s repeating motif for their soundtrack to the French television series Les Revenants, (screened under the title The Returned on Channel 4). There follows a tranche of abrupt and violent noises which put me in mind of those bygone days when fiddling around with synthesiser patches meant playing around with actual voltage and not simply prodding a cursor disinterestedly around a computer screen. This is music that wants to be thought of as shudderingly new and contemporary and yet it still manages to sound not unlike Stockhausen’s Telemusik or Kontakte – pieces that were recorded nearly fifty years ago.

Ultimately, UPIC is a visual control surface, and as such, I don’t think it’s unreasonable to suggest that the drawings made by the operator are as important as the resultant music. Happily, the sleeve of Untitled Phenomenas In Concrete features three examples (00’00” – 07’21”) of Meirino’s draughtsmanship used on the UPIC system to produce Untitled Phenomenas In Concrete, plus an inserted folded A3 poster printed, white on black, with the remaining drawings that make up the composition, (07’21” – 34’17”). This is a welcome addition and goes some way to help the listener properly appreciate the composition. The press release points out that Meirino “…spent nearly four years composing/drawing line by line…listening to every line, gradually adding on lines and sounds, erasing, reassembling…”

A nice package – a gatefold card sleeve with a wraparound sticker applied to it holding all the black and white printed visual information; you have to carefully slit the sticker on one edge to access the disc and poster.

[Editor’s note: of course there is no such word as “Phenomenas”. The plural of Phenomenon is Phenomena, so the addition of the plural “s” is redundant. Meirino’s computer compositional skills are not in question, but he doesn’t know his Greek!]