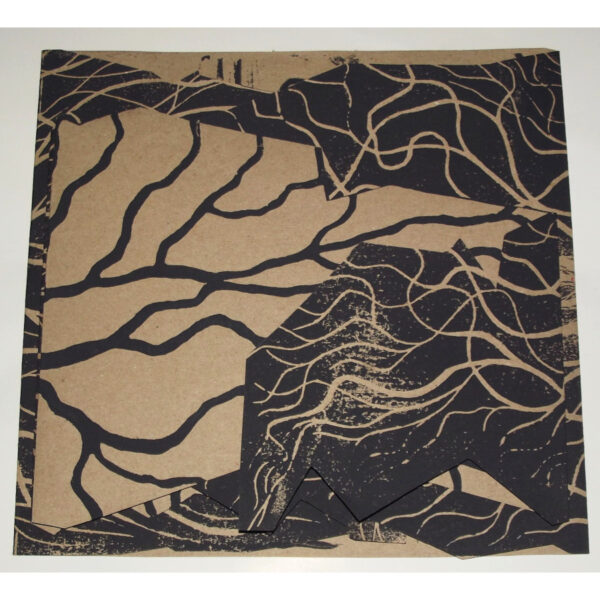 Nice hit of modern dub music from Diggory Kenrick and Tapes, on the druggy-themed ‘Pipe Cleaner’ c/w ‘This Weed’s Making Me Nervous’ (MEEUW MUZAK MM043). Actually Kenrick only appears on ‘Pipe Cleaner’ providing the fantastic “spacey” flute playing, and curious listeners who enjoy such woodwind artistry may want to seek out his single ‘The Lion Flute’ on Coptic Lion from 2012. The flute adds warmth to what is otherwise enjoyable but also merely capable reggae music, where the digitally-sequenced bass comes off a shade too clean and may disappoint hard-core King Tubby fans. However, Tapes (London player Jackson James Bailey) clearly knows his dub music and has been experimenting for years with interesting attempts at cross-pollination, blending dub rhythms with extreme electronica effects. Arrived 05/12/2012.

Mysterious single of day (RLEP01) which we have had since around March 2011. Turns out to be by Stefan Blomeier and its two tracks are ‘Popular Electronics II’ and ‘Radio Astronomy’, but there’s nothing printed on the release except the label name Research Laboratory of Electronic Progress. It’s a brilliant brace of highly entertaining “retro” synth instrumentals, very analogue and assembled with a great deal of warmth and humour. One side is extremely melodic and catchy, the other side slightly more quirked-out and bizarre. I see he’s since done a 12-inch for Lux Rec called ‘Unexpected Journey’ and may also have something to do with Dark Acid II, a compilation for Clan Destine Traxx where he appears with Claire. Depending on which section of the internet you believe, Stefan Blomeier is a Danish mathematician or a Glasgow fine artist. Maybe both are true. Either way this record wins this week’s prize for outstanding fidelity in the Radiophonic field.

The team-up of Kevin Drumm, Jérôme Noetinger and Robert Piotrowicz made the Wrestling (BC04) single for Bocian Records. Right there you’ve got an all-time winning threesome as far as I’m concerned, and I know each of these fellows has produced or been associated with some truly wild / highly accomplished records of electronic music 1. This is why I’m so baffled that Wrestling turns out to be a rather damp Roman candle, sputtering out the odd blue flame when it should be shooting continual bright sparks like a gigantic Catherine Wheel. The synths, live electronics and guitars form an odd desultory jumble, and performances don’t quite cohere enough. It feels like it’s taking place in a festival “workshop” environment, where everything is under-rehearsed, unpolished, and slightly stilted. The release uses a “wrestling” metaphor, with its reference to the mysterious parable about Jacob wrestling the Angel. I doubt if the artistes intend to depict their improvisatory bout as a wrestling session; rather, the texts on the back emphasise the duration of this day-long biblical struggle, the fact that the Angel does not prevail, and something to do with giving Jacob a new name.

From 21 February 2012, a bizarre and unsettling item by Foi Pour Pusillanime (NO LABEL). This self-titled seven-inch is the teamup of Caroline Ehretique with the infamous Ogrob, whose renegade works we recently noted as one fourth of Micro_Penis, but this French creator has many other guises. There are six short compositions on this little weirdie, all with surreal titles such as ‘Vascularisation Maximale’ or ‘Les Enfants de la nuit’, and realised mostly with electronics and voices; you know you just have to own any record where the Ondes Martenot is played, likewise the ‘chiropteran echolocation’ device – which I would guess refers to a bat detector. For me, this tasty noirish creepfest has all the hallmarks of genuine artistic experiment – there’s a real boldness to these statements, along with a sense that the creators don’t much care if anyone’s even listening, so long as they have the chance to explore these interior landscapes from the dark side of their souls, and report back with piecemeal but unedited fragments of delirium captured on tape. All home-made, strikingly original, low key, and in places genuinely unsettling. The sleeve is a handmade linocut, it unfolds into an outsize frieze, and there were three other variants of this cover issued.