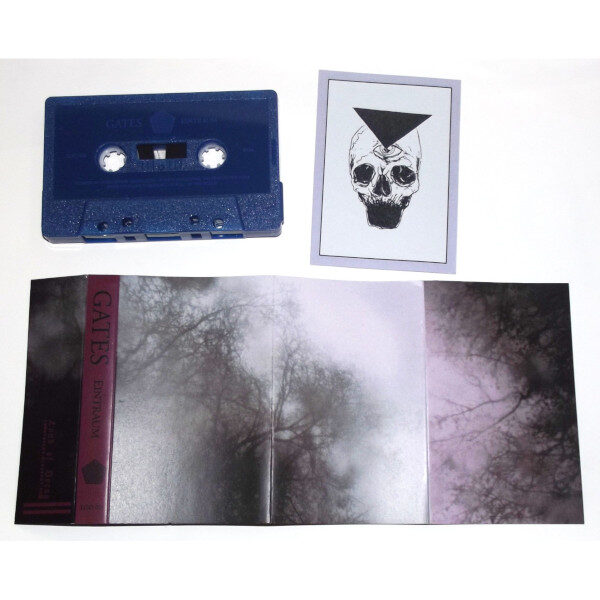 Three more doomy cassettes from Andre Foisy’s Land Of Decay label. Line ’em up in a row and you have title-page illustrations from three chapters of the most chilling book of horror stories never to have been brought to print. Unlike some, this label doesn’t see the tape as a disposable item and time and money is expended on the production, including professionally printed cover artworks in full colour with foldouts…Gates is the duo of Bryan W. Bray with Pau Torres and they produce exceptionally slow, dense and heavy music. On Eintraum (LAND OF DECAY LOD 026) Bray plays a heap of guitars, probably overdubbed and heavily amplified, and isn’t satisfied until he can clog up the entire room with large blocks of frequencies swaying from his mighty axe. I do like the way Bray manages to arrive at a melody (of sorts) in among the teeming clouds of lead-lined dust he kicks up in slow motion with the hooves of his black horse. Torres’ synth and laptop work might be in danger of being swallowed alive by the gigantic whale of Bray’s guitar, juddering and strumming its way into the cold abyss. That inhospitable terrain would be the destination of this Gates work, since it’s clear they are fixated on transporting the listener to a bleak and depressing land where we must dwell forever under the curse of the Icy Ogres. Trees in wintertime are used on the front cover to assist in this metaphor, unsurprisingly. I say that because the bare trees motif has been, dare we say it, a trifle overused on the artwork in this particular genre (cold / depressive / ambient / bleak / metal, delete as applicable) for the last ten years. Demian Johnston however has also provided some ink drawings for this release, which are original and strong. This cassette edition is sold out, but a CD version is on the way from Storm As He Walks. Looks like Gates are from Toronto and Bray may also be associated with Orca, Gardenia, and Fires Of Mammon.

The Subtraction. have a great title – The One Who Infests Ships (LAND OF DECAY LOD 031). If that sentence isn’t a perfect summary of the original Nosferatu film, then I’ll eat F.W. Murnau’s Homburg hat. Said supernatural theme should clue you into horrifying moody content of this tape, which is as chilling as the heart of an eight-foot snowball. The musicians here are J.Soliday and Omar Gonzales. Jason Soliday wowed us with his Nonagon Knives solo album for the CIP label, and his skillful yet intuitive approach to electronic music is nonpareil. He plays his modular synth here like an animal trainer stroking a wild jaguar, barely restraining the animal on its metal chain, secure in the knowledge that said wild cat could probably shred his arm into a stringy pulp in five seconds. Omar, credited with tapes and electronics, is a Chicago noise guy whose music I have not heard, but he’s also No Dreams and runs two labels called Anabolic Dimensions and Depravity. I think even if he just turned up to the session and stood in a corner, his surly demeanour would still leave some impression on the tapes. Could be he’s curbed his tendencies towards violent and harsh noise for this release, as side one’s ‘Noden’s Breath’ is an intensive eerie driftfest, where the solemn tone and tense atmospheres are enough to paint the inside of your face black. Further grim and plague-infested drone may be dredged up from the B-side, with ‘The Violet Gas’ and the title track. The entire release is very suggestive of disease and poison, and the pulsating music attempts to insinuate itself in your nervous system like an evil invisible host. Notice how this project spells The Subtraction. with a full stop at the end, as if you could bring everything in the world to a close simply by saying their name. Alarming and angsty ambient doom.

Kapustin Yar has the ultra-mysterious Trithemius (LAND OF DECAY LOD 035) to his name, and it’s an intense gloomulating spider of misery. Apart from some short contributions to obscure CDR comps, this seems to be the only full-length work released by Antonio Gallucci under this alias. He certainly has a very original sound – not too overloaded with distorted layers of filth and he occasionally displays a flair for bass guitar riffage of which he ought not to be ashamed. Album was perhaps realised using synths, echoed voices, bass, and lots of percussion, but he’s using his twisted imagination to build very dynamic industrial doom-scapes that speak volumes about his own private terrors. If “darkwave” musicians, or those in similar genres, use insistent drumming in this way, I usually feel obliged to bring in the “ritualistic” word, even if it is a terrible cliché; but your man Kapustin does proceed with a sense of ceremony to his tasks, and is certainly determined to work something quite cancerous and deathly out of his system as he realises these terrifying horror-films in sound. Remorselessly evil and miserable, he never lets up the pressure. I don’t listen to so much Black Metal these days, but this release gets close to one of the forbidden thrills I was always hoping for from that genre, a despairing glimpse of abomination and a taste of the cold fires of Hades. Kapustin Yar delivers: agonising extended synth tones, relentless slow drumbeats hammering away, and obscure voices chanting obscure utterances from out of the pallid background murk. ‘Collapsing Palace’ is one very notable achievement on this album. It’s a blood red tape housed in a black cathedral cover. Recommended!