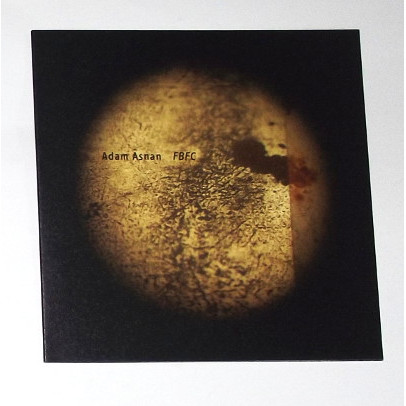 Now 20 releases strong, the Berlin-based 1000füssler label specialises in intriguing, small edition 3” CDR recordings of sound art, which are and likely the sort of articles you’ll find for sale on a small table at the back of a cold, tiny basement venue after a quiet laptop performance you’re not sure if you liked or not. Visually and sonically, each of these releases expresses an initial remoteness, amply compensated for by a duration that invites the all-important careful listening.

The four ‘studies’ that add up to Adam Asnan’s FBFC offer varied tempos of rotor-bladed whirr and grind drawn from ‘a single speaker driver, amplification feedback and the lid of a 35mm nitrate film canister, that once contained reel 13/16 of Henry V’. Perhaps one of the Bard’s tragedies would have added a little more weight to proceedings, which resemble a tamer take on the whirling clawed intro to Boredoms’ Super Roots 6, though with episodes of corrosion rather like that seen on the cover image. From the diminutive format to the arbitrary track durations, a somewhat fatal indecision is the implicit driving force here, and though the sounds are not unattractive by any measure, a single, cohesive piece might have constituted a more engaging artefact.

Gregory Büttner’s Scherenschnitt (either ‘silhouette’, ‘cut out’ or ’paper cut’) is just this, and seven minutes shorter than Asnan’s. Paper, scissors and tape – sonic and stationery – are the stated sound sources here: lots of snipping, slicing and tearing away, with snippet of processing and editing that culminate in expanding clouds of crystalline hiss. Drawn from the artist’s 2012 sound installation, Büttner’s inspired arts and crafts antics – carefully miked and reassembled – yield a less mysterious composition than Asnan’s, but one that is quite satisfying; revealing the essence of his materials, while whetting my appetite for a bit of collage construction of my own.

The sketched sleeve of Olaf Hochherz’s rooms to carry books through also suggests a human hand and do I detect a note of whimsy? The composer’s set-up consists of ‘two parts of an electronic instrument and ten speakers’, the former comprising ‘piezoelectric contact microphones and speakers placed inside a book’, which acts as both a resonator and a filter. The sounds that emanate from this chaotic construction are apparently accidental in nature, with Hochherz shepherding as best he can. Sound-wise, we’re initially presented with a similar proposition to the Asnan effort: a whirring grind of a squeakier species that drops in and out like something from the Schimpfluch set or one of Lucas Abela’s mirthful meanderings; ribbed with ballooney rasps and all sorts of locked-door workshop fumbling that leave the listener firmly outside of the theatre of operations. If intrigue and bafflement are your cup of tea, you’re in good company with Hochherz.