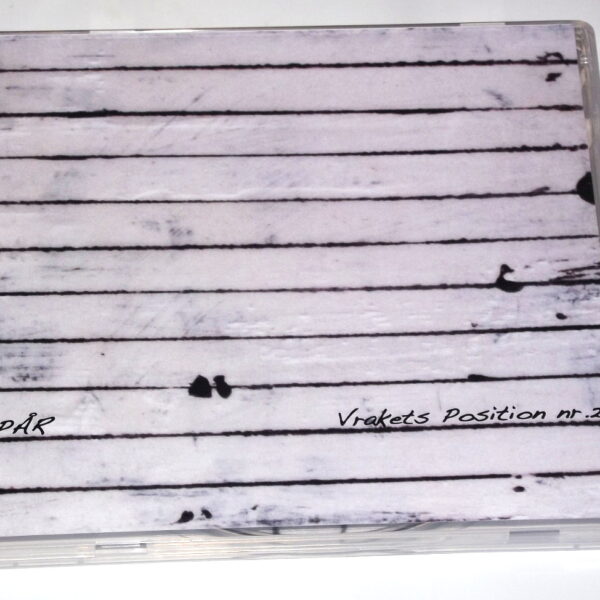 Hooray, here’s the second record from Vrakets Position which we’ve been looking forward to since their 2011 debut release, a powerful self-titled double CD that was a real mind-crusher. The Swedish duo of Göran Green and Tommy Lindholm are in their sixties now, but since 2005 they’ve been going through a purple patch of musical creativity as they revisit a musical partnership which began in the early 1980s. The release of Spår (GALLERI 21 RECORDINGS VRAKGODS 2) in late 2012 coincides with some interest shown by an Art Association in Malmö, who commissioned a five-hour live performance from the band to promote this new release. Five hours is clearly the bare minimum amount of durational space these fellows require, as you can deduce from this album with its excessively lengthy tracks of mindless and mesmerising rock grind. ‘Så Ska Dot Låta’ is the main event, 33 minutes of non-stop musical lard, a simplistic, plodding, tumescent piece of lumpen drone-rock filled with great bowlfuls of loud guitars, hypnotic synths, monotonous bass tones, and a remorseless programmed drum rhythm. Great!

The skill of Vrakets Position is that they keep the music both simple and powerful, and never waste time with airy-fairy nonsense like chord changes, structure, solos, or other wimpy variances. And they rock! I kind of regret the way that Sunn O))) have managed to turn good honest heavy metal into some sort of occultist fine-art drone for intellectuals, resulting in a product that has retained the extreme amplification, but sacrificed everything else – starting with the beat. If you too would prefer that some of sort of backbeat were restored to the equation, then Vrakets Position are the band for you. This isn’t to say they aren’t “art music” too, but with their intensely numbing repetitions played in a no-nonsense heavy-fisted manner, they resemble the greatest Krautrock band that never were; and their insistence on the transformative powers of psychedelic drone might align them with their countrymen from a previous generation, i.e. Pärson Sound.

Also on the album: ‘Korall’, an airless, shrill and metallic piece of clatter that runs over the corpses of many like a freight train; and ‘Sweetheart’, a somewhat more restrained and lyrical chugger which showcases the croaking voice of the lead singer as he delivers fragments from the poetry of W.B. Yeats. As such, it’s a great combination of refined delicacy with brute strength – the marriage between a butterfly and a wrecking ball. Here the performance is very stripped back – you can actually hear the synth keys and drum machine instead of a wall of distorted silver flashing – and some may find it less of an irresistible proposition than the opening blaster, but it has a nice attenuated vibe that links it to the “wasted” garage rock of Les Rallizes Dénudés. Entire release is comprised of live recordings, and it’s a hefty wodge of contemporary rock noise which we recommend. From 15 January 2013.