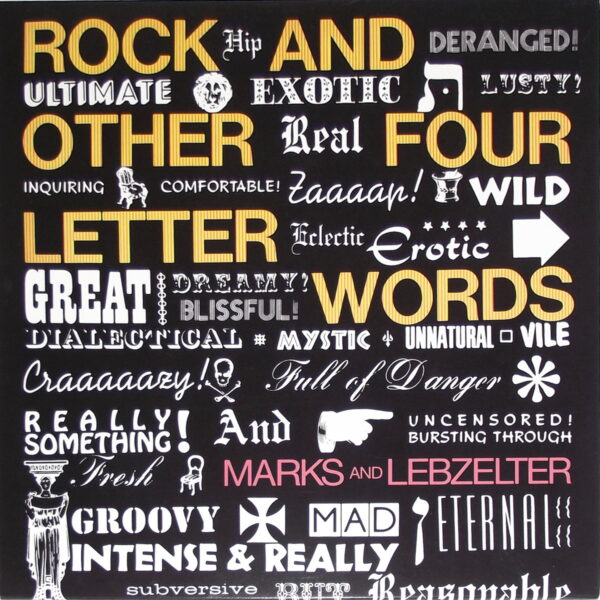 Here’s a real one of a kind item from 1968, reissued in 2012 by Clive Graham on his own label…once in a while Graham gets his hands on some real freakeroonies, such as Beyond The Black Crack by Revd Dwight Frizzell and the indispensable Bunhill Row by Adam Bohman. Rock and Other Four Letter Words, as a partially spoken-word LP, also fits into his personal interest in the Sound Poetry genre, and he has played it on his radio show Sound Poets Exposed alongside the works of Peter Handke, Kenneth Gaburo and Lou Harrison.

The original album was put together by J Marks and Shipen Lebzelter, and released by Columbia Masterworks. The story of it is that J Marks had just compiled a paperback of this title for Bantam Books featuring photographs of contemporary rock stars by Linda Eastman, with quotes from Hendrix, The Doors, Janis Joplin, The Bee Gees, The Mothers of Invention… The record we now hear was built around his tape recordings of these interviews. I should say that this LP is very far from being the “album of the book”. In fact neither these tape snippets, nor the LP itself, really explain anything about the rock musicians or their music. Instead their statements are largely fragmented, cut up and rearranged with tremendous care to form ambiguous and witty collages. It’s form of electro-acoustic manipulation, and does in some sense qualify as “sound poetry”. At least four of the tracks here allow us to hear imaginary surreal dialogues and conversations taking place between Townshend, Page, Grace Slick, Tim Buckley, Lou Adler, the Dave Clark Five and other luminaries. In these meticulously assembled segments, can we expect the “truth” about rock music in 1968 to leak out, Burroughs-style, from these compressions and cut-ups? Hear (and read) to judge for yourself. On ‘Eine Kleine Hayakawa’, Marks edited together various out-take portions – strings of pauses, yawns, mutterings and stutterings from these genius rock stars, not necessarily to make them look stupid, but simply to create 90 seconds of gloriously loopy mouth-gibberish.

I suppose we might expect “rock music” to appear here somewhere, but apart from a “rock riff” supplied by J Marks on the first track, there isn’t much of it. There is gospel, soft pop, absurd songs, microtonal chanting, and an orchestra of session musicians playing all sorts (some of them are from a free jazz background, see below). It’s a verbal and vocal album – if I can state the obvious, there’s a lot of vocals on this album, and they’re producing a veritable tidal wave of verbal information, crashing against your brain in slow motion. “This is the Word” is the opening statement on the insert, as if we’re being read scripture from the Gospel of Rock. On top of the recorded voices and cut-ups, we’ve got two separate choirs – the Gregg Smith Singers and the Greater Abyssynian Baptist Choir, and occasional lead vocals from Marks and Lebeltzer joined by the soloists Hilda Harris and Carol Miller. Harris and Miller do a fine turn on ‘It’s True’, one of many easy-listening swoonalongs on the record, Lebeltzer recites a poem on ‘Essence of its Own’, and all four are featured on ‘Greatest Hits – Love Your Navel’, a vaudeville parody song with absurdist lyrics which would’ve felt right in place on the first United States Of America album (one of this disc’s progenitors, in my estimation; another would be Zappa’s Lumpy Gravy). Harris and Miller are also called upon to recite random words plucked from US sportscasts as the libretto for ‘Poop for Sopranos and Orchestra’, another grandiose nonsense which inflates the ridiculous into the size of a Macy’s parade balloon. To their credit, the very professional singers take it all perfectly seriously, never once cracking an audible grin. Can this possibly get any better?

Well, there’s Gregg Smith Singers who on side one perform ‘In the Middle of Nothing’ which is a gorgeous Fifth Dimension soundalike with a suitably smooth arrangement, but they also sing a remarkable free-form microtonal piece on ‘Essence of its Own’, worthy of a Ligeti choir piece. At moments like these it’s clear the record has an artistic side and the creators’ printed dedication to Karlheinz Stockhausen “who destroyed our ears so we could hear” is not merely empty posturing. Besides that, they somehow recruited Alan Silva to contract some of the session musicians, and he brought in some of his free jazz friends – Andrew Cyrille, Roswell Rudd, Stephen Furtado, Martin Alter…seems astonishing that CBS would have lavished all this money on such a bizarre project from two unknowns, but I suppose this was a more innocent time. The back cover blurb “Featuring a cast of thousands” isn’t far from the mark…and that phrase resonates nicely with the hucksterism promised by the front cover, which resembles a Barnum & Bailey circus poster as much as it’s inspired by Dada typography.

It’s one thing to zoom in on various odd aspects and single tracks of this unusual album, but the totality of it is a very well-integrated and strangely mind-sapping listen. It hangs together beautifully as a fuzzy, dream-like and hilarious-serious album. It’s a unique counter-culture statement of some sort – using themes from underground and mainstream rock, free jazz, gospel, easy listening, poetry, Burroughs cut-ups…and released on a major label. “Remarkably, it is also the first record either of them made,” points out Clive Graham in his sleeve notes. “Nothing of [their] later work compares with the grand scale of their debut.” Graham has done his research, too; J Marks appeared on one other album for the same label by the 1st National Nothing, a colourful rock-theatre combo from California who wound up in NYC. After this he seems to have become Jamake Highwater and is claiming a Native American heritage in his writings and documentary works. Lebzelter’s story is no less strange; he joined The Trees Community, a travelling Christian group of folkies who made a record called The Christ Tree in 1975, which has since acquired some of the same cultiness that attached itself to Father Yod. A fine reissue job, and particular care has been taken with the insert to approximate the wild typography of the original. Groovy! Mad! Intense & really subversive but reasonable!