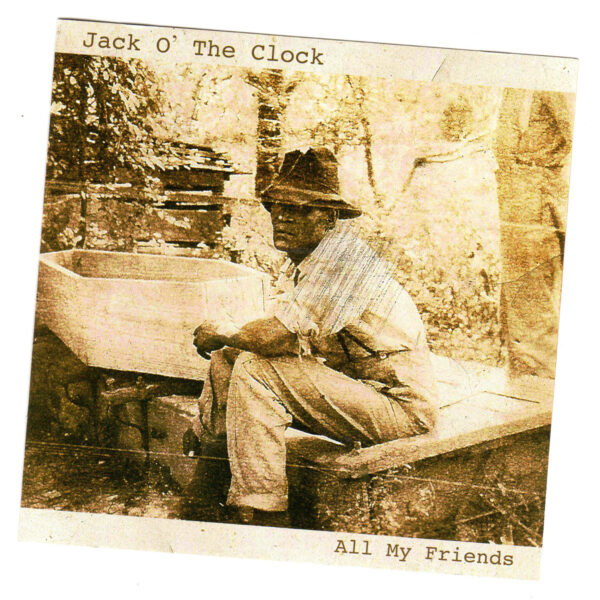 My ears are gradually finding a toehold on the rather strange surface of the Jack O’ The Clock album All My Friends (NO LABEL), sent to us by a band member in Oakland, California. It’s a clutch of strangely poetical and melanholic songs, as pictureseque and raggedly twisted as those dusty old trees you find on the Pacific coast, bleached by the elements and forming queer shapes. The band are a five-piece of players, led by acoustic guitarist and singer Damon Waitkus who wrote most of the songs, and did the production, recording and mixing of the album; he’s joined by Emily Packard, Kate McLoughlin, Jason Hoopes and Jordan Glenn, an all-acoustic band of talented musicians who play assorted strings, percussion and woodwinds, and there are a couple of unusual old-fashioned instruments such as the hammered dulcimer and the psaltery in the mix. The lead singing voice – presumably that of Damon Waitkus himself – is quite remarkable, a distinctive honey-and-mustard tone which you won’t be forgetting in a hurry. His throat caresses each lyric with the softness of a mountain lion’s tongue licking its wounds. And his compositions are quite astonishing, both for the strength of his ideas (rich with literary and poetic ambitions) and the arrangements, which I can only describe as “idiosyncratic”. Simply labelling it “Americana” or “contemporary folk” doesn’t come close to unpacking the density and complexity of these intricate structures, which thread the listener through alternative histories of American musical history with as much verve, daring, and intellectual passion as Van Dyke Parks, with whom Jack O’ The Clock have been favourably compared. In short, it’s like hearing some of my favourite “Old Timey” fiddle and guitar records such as the Hackberry Ramblers or the Carolina Tar Heels updated with compositional ideas worthy of a Stockhausen or a Boulez. If Henry Cowell had grown up in Virginia…but then, I can’t think of how to end to a sentence that begins like that. Better for you to just find a copy of this, their third album, and start to investigate the back catalogue of this uncategorisable project. I’ll certainly keep revisiting this opaque and mysterious work, as I’m sure there’s a lot of content to be excavated from its deep mines. P.S. – Fred Frith endorses them too, describing Waitkus as “an extraordinarily courageous composer”. From 17 June 2013.