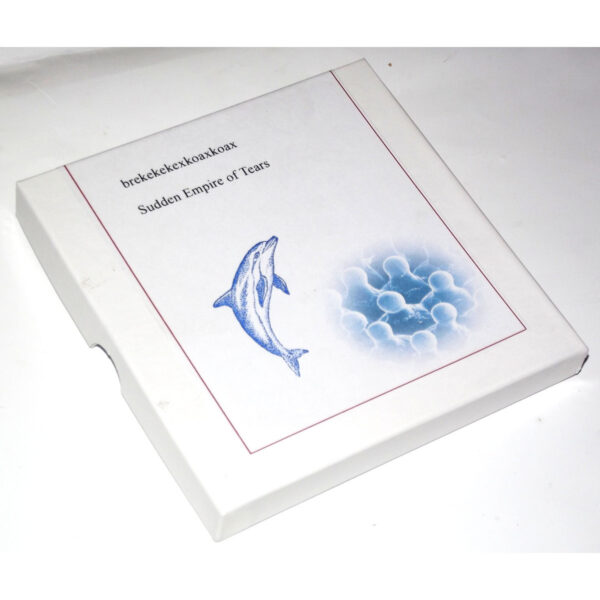 We’ve long been quite keen on Josh Ronsen and his improvising music group brekekekexkoaxkoax, which has occasionally beguiled us with instances of its slow-moving and semi-acoustic approach to a very exploratory and experimental form of improvisation. On Sudden Empire of Tears (hushroom7), it’s less of a group record and more of a solo album; he’s taking a slightly different tack and by way of provender he offers us six tracks of his electro-acoustic compositions, which have at least partially been created from transformations of previous recordings made by the band. Because of this transformative approach, it’s become something of a cliché that electro-acoustic music, and musique concrète in particular, is usually labelled “alchemy” by writers and reviewers (it’s a gaffe to which I must own up myself, in TSP’s second issue), and Ronsen himself is indulging in the perfidious game too if his track titles are anything to go by; I suspect they’ve been lifted directly from some volume of Renaissance science or magic, and even the CD artwork bears a magic circle device of some ilk. And what symbolism might the the blue dolphin on the box cover purport? Since classical antiquity, it has carried the connotation Festina Lente; a most apt device, considering the slow, considered pace with which Ronsen comports himself and his music.

Inside the box however, are a large number of inserted tiny artworks that evoke surrealism, Fluxus, small-run art and poetry magazines, and symbolism; and in the manner of a latterday Edgar Allen Poe, Ronsen has included a short dream diary booklet illustrated with cryptic colour photocopy images. There’s a playful as well as a serious side to all this; there’s a note to anyone who reviews the record, insisting on the use of certain obscure words; and the edition is small, only 50 copies, indicating he might regard it as a very personal project. Musically, it’s a gem; I regard the long tracks here as triumphant examples of musical refashionings which transcend their origins exceptionally well, never calling attention to their means of productions nor the multiple layerings from which presumably they have been built. I am particularly mesmerised by ‘The Hiding of The Face’, and the first part of ‘One Should Stop at this Measure of Knowledge’, both of which fully achieve the trance-state / dream-state aspirations implied by all the packaging and titles. When the spoken-word samples start to invade the latter piece, it’s a most effective intrusion of nightmarish elements. Some copies in the edition, mine included, have a bonus album packed into the box called Anti-Jazz; it’s an unreleased item from 2004, which he’s kept under wraps just because he was disappointed by technical limitations in the mastering. In all, a lovely mystical box to induce dreaming in even the most hardened insomniac. This perfidious wodge of music shines with the luminescence of ten lamberts, providing a most excellent coruscation. From 16 June 2013.