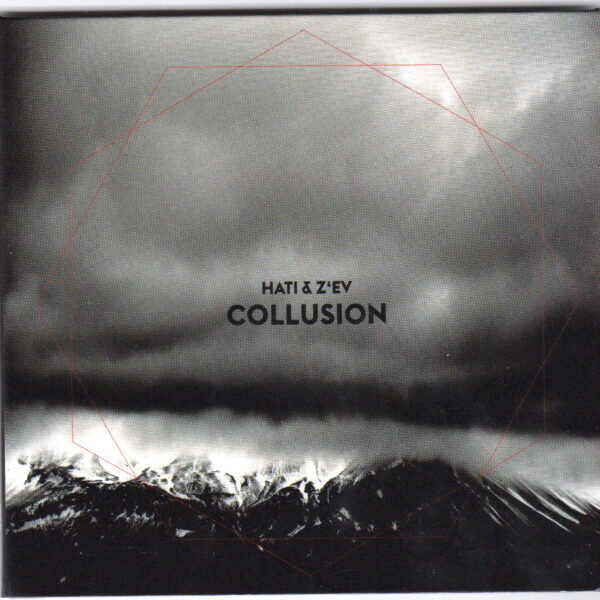 An evocative album, this one; full of rattling bone snaps and overlapping ringing gongs, conjuring an undulating metallic soundscape, a dry-as-dust swell of noise, like a fibrous delicate take on James Tenney’s ‘Having Never Written a Note for Percussion’. Harsh and forbidding, it offers little shelter from a malignity that pervades most of its running length. Rumbling reverberating drum skins, squealing manipulated sheets of tin honk like a sick Albert Ayler, insectoid clicking mandibles smack wetly onto chitinous carapaces; the whole resembling an army of ants processing in military fashion under cobwebbed banners to war with other hives. Collusion is almost entirely percussive, like Shackleton isolating every beat he’s ever made, removing bass lines, forward motion, and all rhythmic and melodic intent, and hurling the collected atomised mess into an erratically revolving centrifuge; an album of uneasy nerve-twanging death-gamelan.

This untitled album is an excavation of fluff and audio detritus, feathery caverns being mined for tangled fibres. Insular and close, the sound-environment captured by this trio is somewhat akin to water-logged ears; a pressured confusion of indistinct voices, tape-whispers, and buzzing electronics. It unfolds in languid contemplative fashion, curling endlessly in upon itself, a burrowing within rather than an expansion out, each additional sound compressing the whole further towards some eventual event-horizon. The trio explore the tactility of the sounds they’ve created: fluttering cassette-flicker, muffled dialogue, the clasping of zips; a mutating bricollage collapsing slowly under its own lazily accumulating mass. Their textural qualities examined both in close-up and at distance; enshrouding the listener in a space of uncertain extent, sudden shapes looming against a backdrop of shifting shadows.

Fireroom is the flash-burnt trio of Ken Vandermark, Paal Nilssen-Love, and Lasse Marhaug; Second Breath was recorded live at London’s Vortex venue in 2011. Vandermark initially inhabits upper register squeals and sharp pops over Marhaug’s scorched crackle and laser-strafing, Nilssen-Love, as ever, a restless interrogator. The relatively still portions see him straining to re-enter the fray, creating a dense patter that nudges V’s post-Coltrane profuse wanderings onto sterner ground. The electronics often create an aircraft rumble as if Gillett Square outside has become home to an aviation show, the roar of engines leaking through the walls. The group commune and co-operate rather than clash; locking together in quickly disintegrating cogs, fleetingly meshed. Each player still strikes out on their own terms, giving fully-committed solos to this explosive set of fire-improv. A performance of grumpy and irascible mood, Second Breath is propelled with effusive blurt and pure noise abstraction, thrilling and immediate.