Another three connected items from Michal Libera’s Populista series. We were mightily impressed by the first three we heard in this series – delvings into modern clasical music and very radical reworkings of same – and now that I look at the literature I find I’m missing three others in the series that I most sorely need, including Ergo Phizmiz’s take on Robert Ashley. The present set is called the United States Of America (Triptych) and is a very unusual and imaginative reflection on the history of American music – on selected aspects of it, at any rate – involving numerous international performers who forgathered in Warsaw in 2012 to do it as part of a week-long residency called Playback Play 2012. Libera downplays his own role in the editing, assemblage and conceptual planning, but I think a lot of the continuity of ideas and coherence here can be attributed to this fellow, who’s proving himself a true “man of ideas” in curated statements like this one, and through exhibitions such as Making the Walls Quake… and its accompanying book of essays. The thread running through all his work seems to be about combining far-flung and apparently unrelated ideas and looking for connections that have been overlooked, and he’s not afraid of imposing connections that may not even be there; the resulting intellectual “constructs” are relevant, regardless of how they may have been arrived at.

The first CD is 1939 Southern Recording Trip Fieldnotes (BR POP07) – and on one level it’s a showcase for two extended performances (about 11 minutes apiece) by Pete Simonelli, performing two rough-house vocal recits in a contrived country-Americana idiom. He roars them out; they are more like declaimed poetry than songs, even where they use repeated phrases and motifs clearly plucked from the history of American blues music – “Tell me how long…”, “Since I was born…” – and every sentence rings out packed with folk-symbolism bordering on the supernatural. Simonelli belts out these soul-searching texts like a Golem possessed by the spirits of Nick Cave and Tom Waits, aiming for that sense of a cursed spirit wandering the earth who’s seen too much. He’s accompanied on these apocalyptic journeys by Miron Grzegorkiewicz (guitar), Michal Biela (bass), and DJ Lenar on the turntable. Right there you’ve got a post-modern stripped-down rethink of blues instrumentation, its surface mussed up in bizarre ways by Lenar’s interpolations. The works takes place in a framework referencing the field recording work of John Lomax and Ruby Lomax; John Lomax, as the world knows, was the ballad-hunter of the United States, performing much the same work of detailed surveying as Cecil Sharp, Francis Child and others did in the United Kingdom and Scotland. Libera’s record uses texts extracted from the Lomax’s written notebooks, and more importantly short excerpts of their tape recordings – spoken word, snippets of songs – to contextualise the piece. These very brief Lomax fragments demonstrate an enquiring mind at work – one who asks questions from the people he’s recording, and not a collector trying to assemble evidence to prove a foregone conclusion or bolster a preconceived idea. It’s especially haunting when the tapes surface in the middle of the Simonelli performances, like superimposed old photographs in the middle of a documentary film. As for Simonelli, his performances are not only over the top, but are spinning a fantasy of a pre-war America that never existed, propped up by hints of folk mythology. This is absolutely in line with Libera’s declared aim – “reinterpretations, overinterpretations and misinterpretations of the past”. 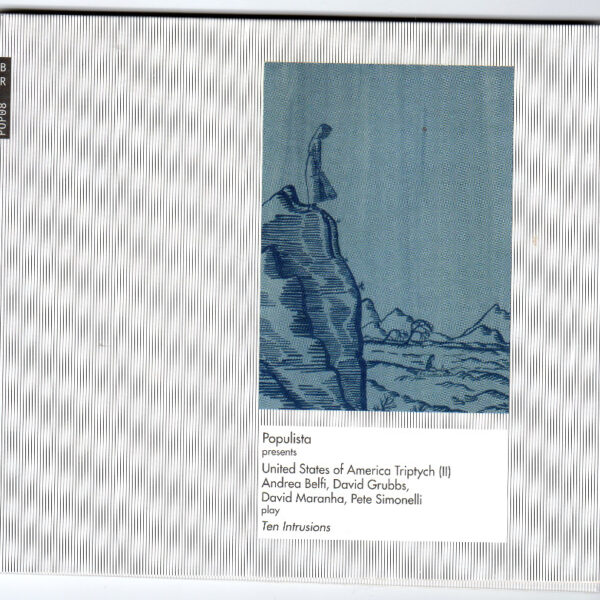 The second CD is Ten Intrusions (BR POP08), a tribute to the work of Harry Partch. We are now in 1949, ten years later from the first part of the trilogy. The musicians perform all but one of Partch’s Eleven Intrusions, although the 1949 date is a little arbitrary if we consider that Partch began the work as early and 1930 and completed the set in 1950. He began considering they could be performed on the adapted guitar, but by 1950 these vocal pieces had been arranged for his unique home-made instruments, such as the harmonic canon, diamond marimba, and cloud chamber bowls. None of the words were Partch’s own; he’d adapted them from poems and writings by Ella Young, Willard Motley, and even Lao Tzu, the ancient Chinese philosopher and poet. Not sure why I’m bothering to pass on all this information to you, since the recorded performance here has departed massively from Partch’s original score, and the trio don’t play the original Partch instruments. David Grubbs (guitar), David Maranha (organ) and Andrea Belfi (percussion) provide another minimal and pared-down musical framework for the vocal work of Pete Simonelli; hints of blues idioms suggested by the slide guitar mingle with elements of free improvisation and drone music. Simonelli’s histrionics from the first CD are abandoned in favour of a severe, tight-lipped no-nonsense recitation, that admits of virtually no emotion. All of this is in almost complete contrast to the recordings I’ve heard of the Eleven Intrusions, which are delicate statements full of wistful and graceful emotions, where a melancholic voice wails its plaint against the modest but very rich instrumentation. This sombre and stern remake changes Partch’s dream-like poems into hard facts, facts which we can live by. The intention may have been to emphasise the solitude of the composer (he wrote some of the work in an isolated studio in Gualala); Libera’s note also claim that this music is “perhaps one of the first cosmopolitan reinventions of American native music”. If that statement holds any water, then it’s possible to hear a lot more alternative history in Simonelli’s stark vocalisations, as if he was brooding long and hard on the encroachment of the land by rapacious settlers motivated by John Sullivan’s “Manifest Destiny”. 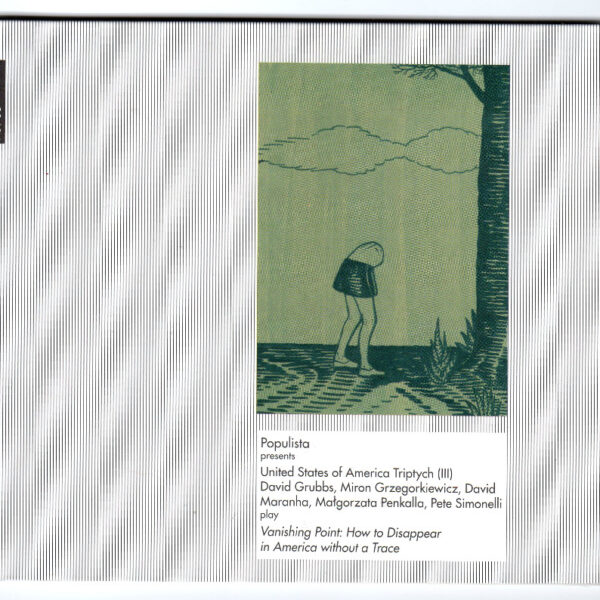 The last panel of the trilogy is Vanishing Point: How to Disappear in American without a Trace (BR POP09). It’s the most unfathomable of the three, and the most intense. The implied date structure of 1939-1949 has been abandoned now, and we’re deliberately left stranded in an uncertain, undated future. It’s a spoken word piece with music, and the text comes from a book apparently edited by Susanne Burner, though it may also be an anonymous work written by a “survivalist”; it’s all about detailed advice on how to operate as a fugitive and leave no tracks as you flee your adversary. Natch, it’s teeming with paranoia; on “Kill the Dog”, Simonelli makes a real meal out of the unpleasant text and throws himself into the role, putting himself and the listener directly into this drastic no-win situation where a fugitive has to kill a dog that’s on his heels, and there’s a seemingly endless description of how to go about it, and why. Whoever wrote this text clearly lived and died by the ultimatum “It’s him or me”. Musically, the alarming mood is fuelled by the nerve-wracking abstractions created by Grubbs, Maranha and Grzegorkiewicz with their guitars, organ and violin. If you can endure the 16 minutes of “Die with Dignity” with your fingernails intact, you’ve got nerves of steel; the vivid descriptions of police operations regarding fugitives is not for the squeamish. How does this contemporary, neurotic vision square with the rest of the trilogy? Well, it’s well known that Harry Partch was a hobo; but on the other hand he chose to drop out of society in the 1930s with some expectation that he could drop back in, and the rail-riding world he detailed in Bitter Music seems positively genteel compared to the urgent all-or-nothing imperatives glimpsed in Vanishing Point. Likewise, the itinerant voyages of the Lomaxes are shown to have degraded by the later 20th century into these futile car chases escaping the police. There’s one last thing. With the striking and terrifying dog image in its centre, I would also suggest that this canvas in the trilogy connects strongly to America’s rural blues history; what else could that dog be but the hellhound on the trail of Robert Johnson?

“Three images of America facing each other” is just one possible interpretation that Libera himself offers for this whole work; he intends the trilogy to remain open-ended, a series of questions rather than answers, yet many clues are inserted in its stark near-deserted landscapes. The cover artworks, all depicting figures faced with barren and hard-to-negotiate landscapes, were created by Aleksandra Waliszewska. From 12 April 2013, highest recommendation for these excellent meta-text musical statements.