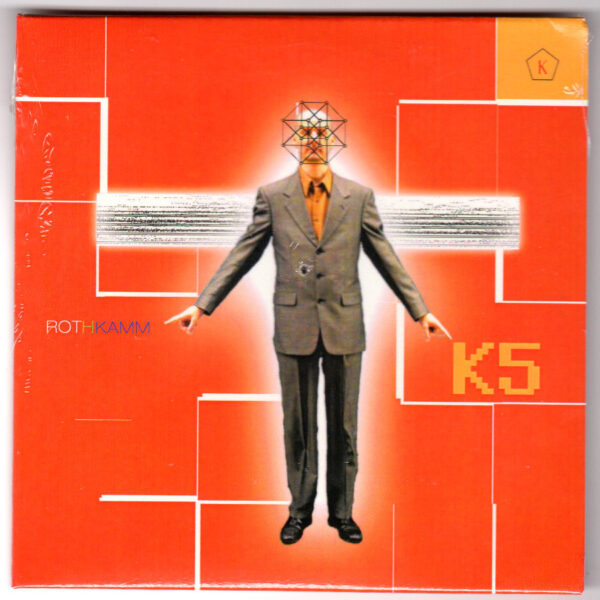 K5. Frank runs through the ramifications, numerological, linguistic, esoteric, epistemological and also, but most importantly, those pertaining to synthesiser identification. Japanese instrument manufacturer Kawai brought out a range of digital synthesisers during the 80s that included the K5, a grey box that, unusually, offered the user the ability to generate sounds using additive synthesis, still one of the lesser encountered synthesis methods even today. Having owned a (dire but enjoyed) K1 – similar to, but slightly worse than, a Roland D10 or D50 – I felt the warm glow of nostalgia for obsolete, unintuitive, obstructive and unlovely instruments that somewhere in their cold machine hearts may offer an unusual effect or hidden feature more easily and satisfyingly accessed through other hardware.

From the years 2004 and 2012 we are presented with nine pieces, titled but also catalogued by the composer using the classical opus numbering system, a conceit which points towards the electro-orchestral nature of the box-symphonies within. Atonalities, sine waves, alien drones and glissandos slide around like the shadows of Platonic solids looming in a grey pixel-mist. Indeed, these CD slices shift like a Plato’s cave Xerox of Cologne WDR produkt. No tape friction, no heat – moving images projected.

Rothkamm delights in arcane logic structure, obtuse menu systems appealing to the hermetically minded, push button accessed sub menus, office furniture taken through a black hole, laminated sheets of plastic sound extruded like one of Gen Ken Montgomery’s lamination pieces. The album a monomaniacal exploration of parameters of a single instrument, almost arbitrary and absurd, but pursued with straight-faced rigour – a sort of well-tempered synthesis module. For him, the romance of the manual – a ring binder of instructions for an instrument that doesn’t exist populated with the harmonics of the imagination.

There is a Californian tinge that reminds of Erik Davis’s Techgnosis tome, equally there are echoes of the endless mutations of human art generator Conrad Schnitzler. You get the feeling there could be zip discs full of this stuff and it could be churned out as quickly as printing a pdf instruction manual. And that’s a compliment in this context (in case you couldn’t tell).I regard Schnitzler as a great artist and poet of our times, reformatting and subverting, amongst other things, man-machine myths. Rothkamm’s interchangeable studies of machine symphonics share a steely grind and similarly impish humour combo. Do not be fooled by the featureless plastic exterior. Or, in fact, do be. Mr Frank Rothkamm sails a similarly lone course through the uncharted digital oceans, the winds of concept and phone-numbers for long-since-disappeared tech-support departments filling his sails, scanning the horizons, hunting the great white midi monster.

A whale of a time is guaranteed for all pop lovers. Be sure to visit the website for more floppy disc riffs on additive synthesis, sine waves and Plato. If I can quote Mr Rothkamm: ‘the K5 synthesizer is a Platonic Machine because I can personally assure you a posteriori that while working with it you do not experience any pleasure or pain whatsoever, only the numbing sensation of tedious repetition, which is quite sinusoidal.’. Amen, and enjoy!