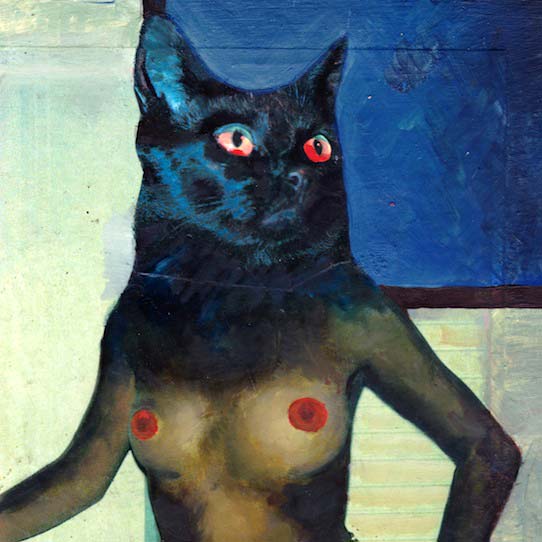 David Fenech is a groovy French composer-musician who I first heard of when he contributed his skillset to the 2011 monster Superdisque, with fellow Frenchman Jac Berrocal and the wonderful Ghédalia Tazartès. Turns out he’s also a guitar maniac of the first water and has played alongside various free improvisers and talented individualists, besides leading the 1990s French punk collective Peu Importe. Since I never heard enough of his guitar playing to judge, I like to fantasise that he owns a deep scarlet “axe” and that he probably plays it in a scratchy, angrified, “blocky” style, much like an updated version of Fred Frith in a lime green suit. Grand Huit (GR 2026) was his first solo record from 2000, and in 2012 it got reissued on vinyl by Gagarin Records 1. Right away the humourous-surreal cover art of cat-into-human 2 lets us know we’re in for a fine and freaky time. I suppose I might have expected a guitar record of some sort, but this album is eccentric and varied, sprawling all over the shop in a very good way, and largely unclassifiable – highly unusual songs and instrumentals, composed with percussion, keyboards, drum machines, field recordings of schoolchildren making announcements, and his own bizarrely energised singing – on which more to follow.

Fenech seems to have a rough and ready approach to record production, which I enjoy immensely; almost every track feels very spontaneous 3 , thrown together like so much fascinating bric-a-brac retrieved from a flea market, and he’s not afraid to leave plenty of mismatches, false starts, and overdubs that miss the mark in a compelling manner. Then there’s his highly contrived singing voice; on ‘Mister Master’ he’s growling and barking out his words so much that he forces himself into a coughing fit (needless to say, he doesn’t edit out the coughing), and on ‘Boeuf Bourguiba / Opera En Toc’, you’ll hear his attempt at singing in a more-or-less bluesy idiom, detoured by way of David Thomas. Talk about guttural – he comes close to swallowing his own nose! There’s also the charming and eccentric instrumentals such as ‘Jaune d’oeuf en cage’ or ‘Un Lacher de Lucioles / Jukebox’, both of which feature tasty keyboards and guitar lines interlocking as smoothly as gold metalwork around a precious jewel, and give us a glimpse of what Frank Zappa might have accomplished with his little black notes if he didn’t hate all of Europe with such a misanthropic vengeance. Or how about the crazed Residents-like toy disco thump of ‘Grand Huit’? Irresistible, declare 18 swooning denizens of the dancefloor. Or the menacing undercurrents to ‘Solaris’, with its sinister guitar notes undermining the easy-listening samba melody and where the lead vocal is sung by a half-pint kleptomaniac dwarf from inside a birdcage. It’s a brilliant example of subverted pop music, dark clouds of New Wave menace occluding the Burt Bacharach sunshine.

Truly unpredictable, you never know where any given tune is heading, or which stylistic outfit Mr Quick-Change is going to whip out next from his magic trunk of disguises. He makes it look easy, but you can bet there’s 500 kilograms of sheer talent and hard work behind his every move. Recommended!