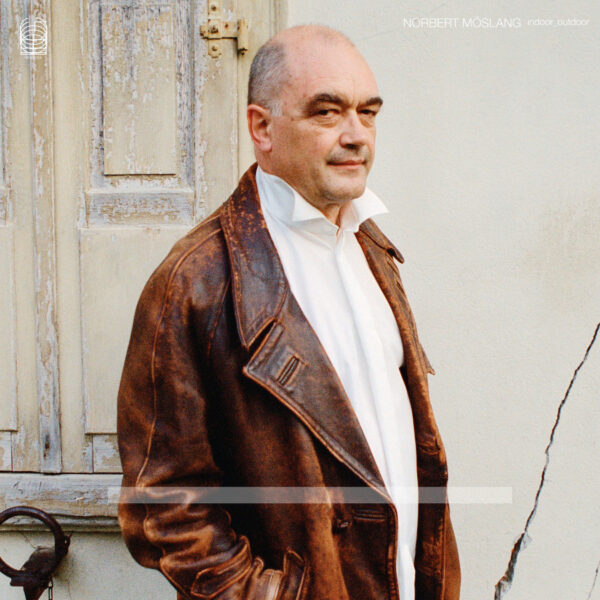 Norbert Möslang’s music is a firm favourite in this house. He was one half of Voice Crack, the Swiss duo who delivered a good dose of abrasive non-stop noise to the passive barely-twitching corpse of free improvisation in the late 1980s and early 1990s…it was particularly poignant when they made records together with Borbetomagus. I often wish I could recapture the thrilling shock I felt when I first heard the record Fish That Sparkling Bubble. Well, here’s Norbert with his own album indoor_outdoor (IDEOLOGIC ORGAN SOMA008) on the Stephen O’Malley Mego-sponsored imprint. indoor_outdoor contains two side-long tracks, both worthy of investigation by hungry noise-snoopers in need of a good fix and showing that “Norbert The Noise” can still drive a bulldozer through the opposition with the merest flick of his wrist, swinging a wrecking ball that fells the contemporary music “scene” like the flimsy deck of cards it is. On the title track, he’s doing it in fits and starts, drip-feeding us with little chunks of the “good stuff” from his mighty funnel, until by track’s end those drips have turned into a raging torrent. Hard to believe it’s derived from field recordings of water. There’s a harbour close to where he lives where he captured the sounds, which have been processed and recomposed in the studio in a brilliantly “hands-on”, rugged approach to electro-acoustic composition. No namby-pamby over-cooked studio technique for him, nor agonising for six months over delicate nuances of tone, nossir! Part of the interest here lies in his iron control, knowing that he has so much chaotic power caged in his equipment like a jaguar. Tension arises at those moments when the chaos threatens to overwhelm him. But he reins in the jaguar and then sticks his own head in its jaws, as an index to his fearless skills. The crowd roars. Additionally, the sounds are beautifully rich and textured, and though the floor of this hotel may comprise rough-hewn surfaces and splintery timbers, they have been jointed in place by a master carpenter. Ach! I’m trying to say something here about the amazing dynamics of the sound, but I’ve been railroaded by my own mixed metaphors. That’ll teach me. How redundant it is to write about music.

Let’s flip this hot potato pancake over to investigate ‘hot_cold_shield’, where “Möslang The Magnificent” teams up with Toshimaru Nakamura. This fierce cut is a live recording from a 2012 music festival in Quebec. A pitched battle between the famous no-input mixing board and the equally famous cracked everyday-electronics ensues. Interesting that both of these performers have become associated with a particular type of equipment and usually insist that it’s always printed in the credits that way. I say a battle because this workout does in places resemble something of a war zone, although that’s only because I’m one of those listeners who can’t help running imaginary movies in my head when playing records. This one featured quite a few helicopters, probably carrying high explosives, and also collapsing buildings everywhere and much chaotic sprawl. This isn’t to say that the duo were fighting with each other, but they certainly know how to provide a good soundtrack for the end of the world when they lock their aural antlers. If the destruction is happening in a somewhat haphazard and inefficient manner, that’s down to lack of military planning on the part of my bazooka commander, ending up in a melee or a rout. This indicates I suppose the improvised dimensions to this side of the record; had some compositional programming been applied, it’s possible that the destruction of the city could have been effected much sooner, and with more spectacular explosions. As it is, ‘hot_cold_shield’ is choppy and disorganised, but it’s also much warmer and juicier this way. Noise improv made by humans. From December 2012.