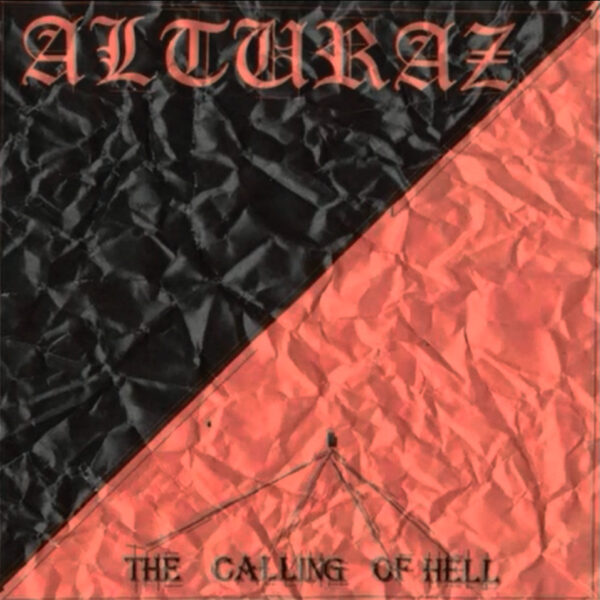 A most curious object this CDR from San Francisco act Alturaz has turned out to be: it’s inspired by black metal ideas and concepts but all instruments are either organ or other keyboards. The quartet of tracks runs to just under 18 minutes so listeners might expect there’s not much on offer. You would be wrong: this is creepy Gothick-sounding atmospheric music that nods in the direction of old horror movie soundtracks made for films about proper bloodsucking daemons and not pallid Robert Patterson parodies of current Twilight film franchise fame. Alturaz is a solo project by a musician who helms a perhaps more conventional (?) BM act called Wikkid.

The recording opens with a slow spooky droning organ piece based around a very simple chord sequence, against which a more sprightly organ melody may dance in short bursts. Picture yourselves entering a tall, grim and grey cathedral, the stone walls of which depict carved figures of sinners in hell writhing in silent screaming agony under sadistic punishments dealt by demented devils. We continue on to a deep darker-than-dark space atmosphere piece of low murmur, the odd synth splash and a blank wall of nothingness. As this amorphous piece progresses, it gains a more definite if very plastic shape and a brooding atmosphere. The music becomes a twitchy pulsing, silver-shimmery alien skeletal critter, all long fragile limbs with fine veins of rhythmically swishing ichor. It is a beautiful and delicate beast yet there’s something deeply sinister in its darting movements.

If you were expecting the CDR to depart on a triumphant though maniacally evil note, you’ll be disappointed: the outro track is short and barely there, a most understated and minimal drone mutter barely rising above the black formless plasma murk that births it. No better way to leave listeners stranded in deep space with no means of escape or survival than this coldly indifferent desertion can be conceived of.

In its own understated way, this recording poses a portrait of Hell as a place of dark brooding silences and overbearing dread. The use of simple repetitive drone, drawn out and relatively unembellished, creates an oppressive black atmosphere and a feeling of malevolence. Alturaz combines serenity and mesmeric sounds into a dark trance music. I only wish the whole thing had been longer for listeners to savour something of an unenviable experience of being plunged into this forbidding universe and left there forever.