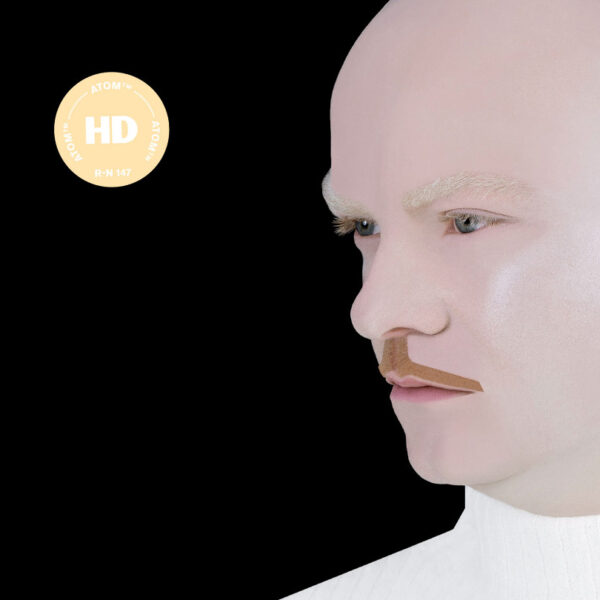 Slick as oil, sumptuous and satirical, Atom™’s latest LP of machined electro-pop music has many antecedents, among whom Alva Noto, Kraftwerk, Prince and all those who follow the slenderest of muses, and to boot he’s probably the most waggish artist on the Raster Noton label. It’s very nice to hear something that diverges from the typically ‘cyborg’ mood of so many of his label mates, as much as I do enjoy their work.

The spirit of play is in full flight in the uptempo bleep march, ‘Empty’ – a monotone parody on ‘Video Killed the Radio Star’ – and the Prince-referencing ‘I Love U (Like I Love My Drum Machine)’, though I’ve got to say that having never had much time for Jamie Lidell’s mannered white-soul vocals, this one hasn’t changed my mind any. Same thing with the pixelated cover (with spot-on vocals) of The Who’s much loved/covered ‘My Generation’, for whom there’s doubtless a more appreciative audience.

Still, there’s a point behind all this, wrapped in a blended expression of sincere exaltation at all Atom loves about pop music and mirthful scorn at industry contamination, as in ‘Stop (Imperialist Pop)’. In either respect, the message is never grating, and the music – as lacking in bloat as pop music could ever be – carries it well. There’s also a fair amount of inconspicuous euro-techno-pop to be had – the sparing synth n’drum machine voyage of ‘Riding the Void’ for one – all delivered nonetheless, with measure and panache. The nine-song set concludes with a pleasing Kraftwerk tribute, ‘Ich Bin Meine Maschine’ (featuring Carsten Nicolai), which has also been issued as a 12” single with a tasty remix by Function, and is also worth your free time and hard-earned.

While sporting one of the more outlandish sobriquets in the realm, the electro-pop concern Unicorn Hard-On is very much a down to earth affair. Now over a decade in action, this solo project of one Valerie Martino has left its unmistakeable moniker on many a self-released cassette and a fair few live posters over the last few years, and at last her bona fide debut album, Weird Universe. Suitable home it has found on the ever interesting Spectrum Spools label, for whom she’s gone all out it seems: Mechanical ridmicks and red alert surges shepherding us into a well-behaved, noise pop landscape: the inner topography of a lackadaisical sibling to the Fuck Buttons.

Conspicuous are its abundances of colourful, melodic build up, light static shading, wibbly-wobbly modulation and clip-clopping synth-pads, which (alas) remain perpetually averse to fifth gear speeds and the resulting euphoria. Though ‘mostly harmless’ in the main, tracks like ‘Houndstooth’ are perhaps a little too generic for my liking: an elevating tower of bleeps that could easily have been knocked out during the bedroom electronica glut a decade ago. ‘Mysterious Prism’ – the closer – does, however, display pleasing prowess with some filthy, pounding Game Boy electronics, which could well please Crystal Castles fans.