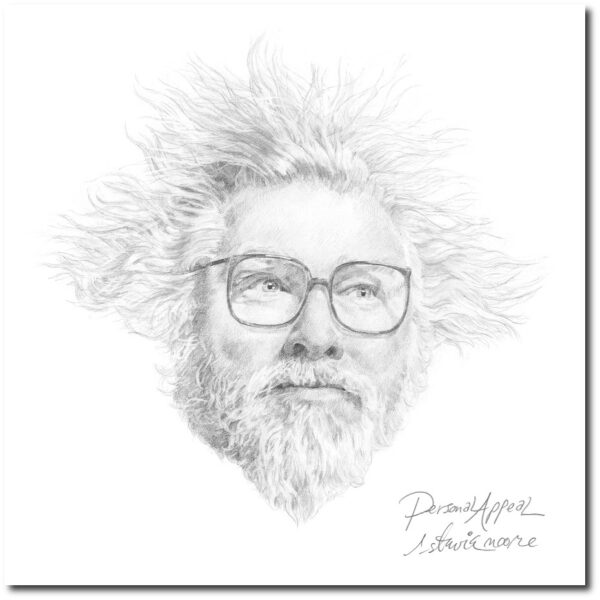 Personal Appeal (CARE IN THE COMMUNITY RECORDINGS CARE109CD) is a compilation of songs by R. Stevie Moore, mostly I think recorded in a period dating from 1973 to 1979. There was a time when Moore’s releases kept popping up for sale in the Recommended Records catalogue, in the 1980s when said catalogue was sent out in the mail, and writer / musician Chris Cutler, a known fan of all stripes of avant-pop music with an intellectual bent, would praise “pop genius” Moore. “Classic intelligent pop at its obscure & accessible toe-tapping best,” he wrote in Autumn 1986, “Stevie has more ideas per groove CM than anyone else in the pop field…recommended unequivocally”. While I never bought the records at the time, I was vaguely aware that the musician had an extensive back catalogue of home-released cassettes, and was highly regarded in the thriving tape world of the eighties; Robin James wrote about him in his Cassette Mythos book, noting that Moore had made his work available through his own Cassette Club label since 1971, mailing out orders from his home in New Jersey. This isn’t the first time his work has been compiled; there have been a few previous efforts, including the 2009 set Meet The R. Stevie Moore! on Cherry Red. Many of these comps stooped to concocting ironic variations on a “Greatest Hits” title – I say ironic, because this unsung genius of underground lo-fi pop music has never had a hit record. It clearly wasn’t for lack of skill, since there’s abundant evidence here of his songcraft, his overdubbing abilities and studio technique in support of his highly fluent multi-instrumental playing, and his flawless singing voice. Already I’m reaching for comparisons with the early records of Todd Rundgren, such as the double LP Something / Anything? where Todd wrote, sung and played the first three sides completely solo.

Over time Moore has attracted the attention of other underground luminaries such as Thurston Moore and Jad Fair; the latter even made a single with him. Life hasn’t always been happy for him though, and as recently as 2010 he left New Jersey to return to his Nashville home, apparently broke and homeless and in terrible physical shape, at the point of utter despair. This sad tale is related in the liner notes written by Irwin Chusid, that excellent writer, journalist and broadcaster who has for many years been a friend to “outsider music” of all kinds. He wrote about many such musicians 1 who fit his defined profile, including Jandek, Syd Barrett, and The Shaggs, in his volume Songs In The Key Of Z. He also wrote about Wesley Willis, a street musician who likewise has a formidable back catalogue of home-made tapes. As a prolific and determined self-publisher, it’s clearly about time a unique figure like R. Stevie Moore was reclaimed into today’s polymorphous culture. As I write it seems media rehabilitation has been well underway for this last twelvemonth; features or interviews in the NME, and even The Guardian. Would Chris Cutler feel at all vindicated now after some 28 years of trying to get people to listen?

The selection of songs here has been personally approved by the artist. Previous comps have tended to rehash the same, or very similar, selections, but Personal Appeal contains “hidden gem obscurities”. Fans of “classic” pop music will find, almost instantly, affinities with Beatles 2 and Beach Boys records that will give them a way in, but Moore is a clever pasticher of many genres, including country and western, folk, bluegrass, and surf music. His effortless vocal harmonies will cause many bobby-soxers to swoon, while fretboard students of the male persuasion will drool over his nifty guitar licks. But there’s clearly a darker side to Moore’s maze of a mind, a side which can’t help bubbling to the surface in spite of all the 1966 sunshine pop effects; it’s like a trickle of oil coming up from the ground below to spoil your picnic. At such moments, especially when the singing voice turns slightly sideways and the reverb device is working overtime, R. Stevie Moore notches up extra weirdness points that would earn him the runner-up prize at a Residents audition 3. Every so often there’s something borderline obsessive in a certain song; it may only be a few bars or 10 seconds of music, but it’s enough to turn the stomachs of a thousand David Gates fans. Part of this might be due to his insistent singing voice. It might also be the excess of verbiage; Moore outdoes Elvis Costello when it comes to packing in the clever lyric-writing, and while he’s not as prone to annoying wordplay as MacManus, he certainly stretches the pop verse form to its limits with his lines – and that’s not to mention the unusual subject matter. Not a single lyric here falls into the cliché trap, but it’s mainly because he evades obvious pop-song treatments with the ease of a greased-up pavement skater. Even when tackling a love song, Moore’s skewed and oblique approaches, as evidenced on ‘Structure of Love’, ‘Quarter Peep Show’ and ‘I’ve begun to fall in love’, will impress the literate listener, as much as they chill us with their bittersweet and plangent emotions. Each song packs a lot of layers, that’s for sure! The last one in my list not only does all the above, but somehow manages to turn in a spot-on Brian Wilson impersonation that’ll make grown men weep. Now, how many songs on your iPod can do all that?

As noted, these 15 cuts are separated by the distance of years, and after listening one end to the other I personally have found it almost impossible to get any sort of handle on the way this creator’s mind works; there’s not much of a thread or pattern, and each track is wildly different from its neighbour. “His formula is not a formula”, confirms Chusid. “His path is unfollowable”. It staggers the imagination to think how much of this material R. Stevie Moore has created in his lifetime, an achievement which I would imagine the world still has yet to come to terms with.