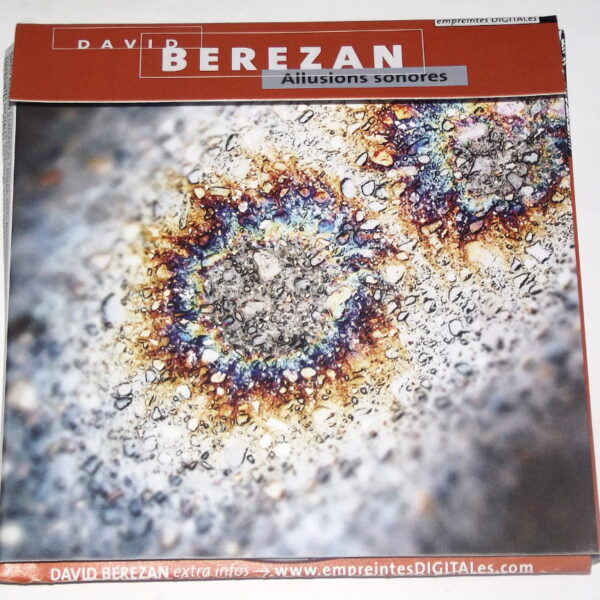 Always grateful to take receipt of new releases from a favourite electroacoustic label: empreintes DIGITALes, whose releases of benchmark collections by Monique Jean and Manuella Blackburn have previously wowed me to annoying verbosity. David Berezan’s a new name to me, but he upholds the label’s reputation for quality product; this set of allusive sounds reflecting everything I enjoy about electroacoustic music. While they are said to inhabit different bodies, Berezan and Blackburn display a strong thematic and audible kinship in their respective works. Both have produced pieces in and about Japan for one thing, and both have an appetite for exotic instruments. Accordingly, Berezan constructs the lush but byzantine second piece, ‘Thumbs’ (2011), from a single plucked note on a Balinese thumb piano; a note he gets right inside: stretching it every which way in and around our ears and bodies.

It is a compositional discipline that informs every piece, each with its distinct identity, which digital processing never detracts from. Take ‘Nijo’ (2009), with its origins in customised Japanese ‘nightingale’ flooring. Otherwise stable and silent, certain castle floorboards were raised ever so slightly as to ‘sing’ if and when an intruder stood upon them, alerting security to their presence. Perhaps for the possibility of emergency, the piece forsakes the stealthy motion one might expect for the torrent of bouldering acoustics we actually hear. Other tracks are more subdued, but no less fascinating: ‘Buoy’ (2011) is almost ambient in its representation of swelling seawater, its patina of digital glitter endowing the soothing sounds with an almost rotoscoped, fictional veneer.

In total, these five pieces offer us a glimpse of the potential breadth of the composer’s work, and I suppose newcomers (in particular) a view of some of the more palatable possibilities afforded by electroacoustic music. Even those of us as jaded about ‘experimental’ music as much as sausage factory pop or electronic should surely find solace in such careful craft.

Cool, calm & collected collection of clicks n’cuts piped in from Portugal, courtesy of Miguel Carvalhais and Pedro Tudela, aka duo @C. While not an explicitly maritime enterprise, these exploratory and oft-asymmetrical offerings seemingly probe fissures in the ocean depths to reveal a complex and hitherto concealed world of electronic miniatures; doing so amidst a palpable atmospheric pressure, which is offset by the curious movements of such delicate creatures, and illuminated by an occasional sweep of radiance.

Sometimes as long as twenty minutes, these five tracks constitute the soundtrack to ‘OVO’, a multimedia puppetry piece by the theatre group Teatro de Marionetas do Porto. A little YouTube searching produces an eye-catching array of situations for this play alone, which resembles in places a western variation on Japanese bunraku, some puppets requiring several nimble, black-garbed manipulators. While their thespian antics are not always immune from derision, the puppetry is quite novel, and the footage offers some context for the music and its high level of abstraction.

The album’s staple sound is a low-key, flickering fluorescence: as unhurried and eminently fascinating as krill viewed through a microscope. Diversion emerges in the spell of robotic alien-speak in ‘100’, while ‘101’ is hijacked by a brutish variant on the signature style, inducting listeners into a briefly heightened tension level, like a submarine hull creaking under immense pressure. All in all, it’s not all that alien from the hitherto popular ‘glitch’ sound of Mille Plateaux et al., though a good deal more streamlined, than that which I’ve heard anyway.

There are only so many clichés one can wheel out to describe the dark ambient location recording, and I’ve flogged them all to death. Differentiating the one from the homogenous many and doing so persuasively is the reviewer’s lot, though there are worse jobs I’ll admit. I suppose a similar problem pesters the artist, for whom novelty is by necessity the child of invention, but for every ten of whom we might find one with something interesting going on. The others badly lack friends – or at least honest ones – to talk them out of serving up some ‘same old’ gloomy slop they recorded in a spooky, abandoned factory. Glad am I to report then that the Seattle Phonographers Union falls into the fortuitous 10%. Why badger friends when you can simply recruit them?

This is certainly the case with the duo Howlround, on whose recent recordings I have shovelled glow-in-the-dark accolades. Their haphazard reel-to-reel merging of out-of-sync sound recordings yielded us something genuinely engaging. They also know when and where to make an edit: a skill in woefully short supply in this field (pun intended). The 16-strong SPU also belongs to this illustrious fraternity of the darkness, thanks to these two side-long hunks of monolithic menace, which far better resemble electroacoustic composition than snapshots from a perfunctory site inspection. With an almost painful freighting of invisible somethings into near view across immeasurable spans, the sounds shift (in their own time) between miles of hulking reverb to pin-drop immediacy and back, in seamless fashion.

One might expect a painstaking but judicious editing process to be the key here, but far from it. What we hear arises from onstage improvisations using previously made field recordings, within selected spaces, in this case a disused aircraft hanger and an unfinished nuclear power station. And it’s unedited to boot. It must have been the treat for the audience to experience these booming acoustics so directly, but the current living room bombardment seems an adequate booby prize. Feels rather like being on the set of Terry Gilliam’s latest, The Zero Theorem, though without all the tacky futurist zeitgeist baubles that left it a weak sibling to Brazil. I’ve no idea how many of the collective were ‘performing’ on their laptops at the time of these sets, but collectively they are adept at obviating intrusiveness and present a strong case for a ‘strength in numbers’ approach to field recording.