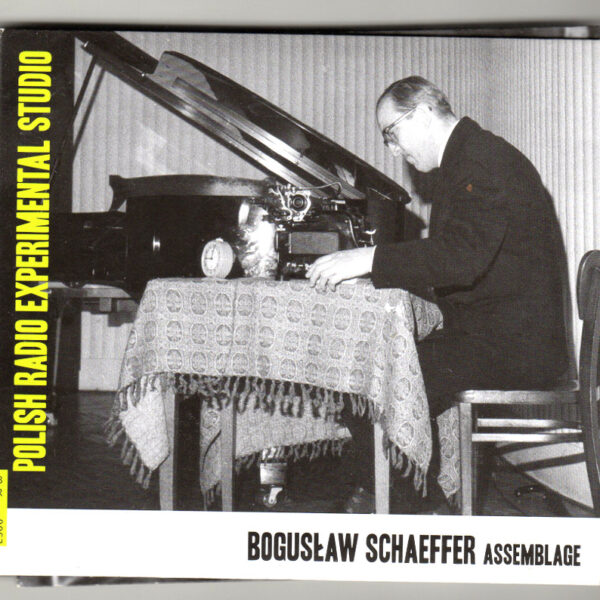 Polish composer born 1929, Schaeffer’s compositions were dedicated to mixing tapes and instruments, somewhere between graphical scores and improvisation on tape. His work developed within the context of the Polish radio experimental studio. This double CD combines works from 1966 to 2011 and includes some electronics compositions such as ‘Assemblage’, classic concrete music in the spirit of Pierre Schaeffer and instrument manipulation, deconstructed from a violin instead of a piano in the spirit of Pierre Henry. ‘Electronic Symphony’ contains a more Stockhausen-esque German electronic music aesthetic, with synthesizer and electronic instruments as frequency generators. The first CD also includes pieces for tapes, harp (‘Heraklitiana’) and tuba (‘Project’). Schaeffer’s music has an upbeat tempo, movement, dynamics and space, and if there is referential part of dodecaphonic music, he tends to develop his own approach of sound without following any given school (Austrian, German, French…).

The second CD includes pieces for tapes and instruments such as cello and French horn, mixed with electronic music pieces and other interpretations of ‘Assemblage’; as well as a very remarkable new composition from 2011, “O.T.” played by Thomas Lehn, the musician from the improv scene playing a modular synth. The recordings sound more “real-time”, but the music itself has a sense of deconstruction as if proposed by Edgar Varèse, with fast electronic sound combinations using different pitches and applied filters, an abrupt abusing of fade in and fade out. These are very interesting compositions by Boguslaw Schaeffer who is probably not as well-known as the great masters of this genre, but he has an approach to music that’s more open, and less academic. It is also important to note that the effort taken by Boleslaw Blaszczyk, Michal Libera and Michal Mendyk to publish these composers from lesser-known research studios results in complexifying the historical understanding we have of this music.