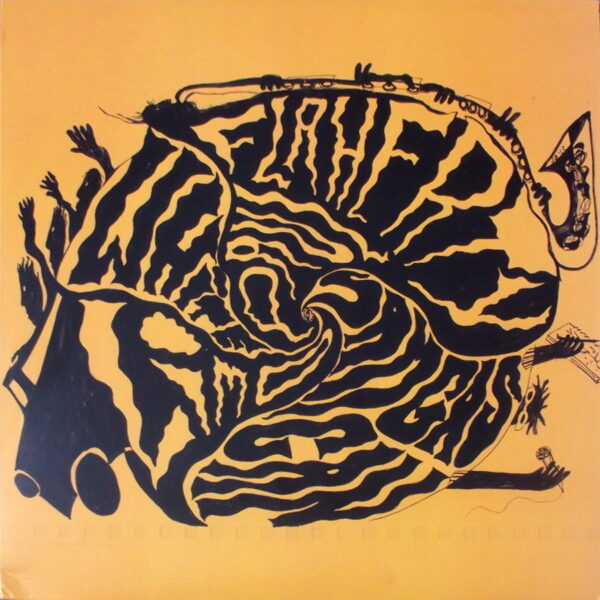 Here are a couple of vinyl long-players which may or may not reflect aspects of contemporary American underground music in and around Massachusetts.

The Mystery Triangle (FEEDING TUBE RECORDS FTR090 / MYSTRA RECORDS #011) item takes its name from an event in November 2011, performed and recorded at the record shop Mystery Train in Amherst. It was recorded by Ted Lee of Feeding Tube Records and released here for our delectation with a gorgeous piece of cover art drawn by Joshua Burkett, who also happens to be the owner of said record shop. The sumptuous melty distortion of the lettering might take its cue from Haight-Ashbury psychedelic posters, but in terms of that spiral shape and bold use of black and white shapes, this is pretty much an ESP-Disk’ cover manqué. Notice how Paul Flaherty, the white-haired and bearded demiurge of the tenor saxophone, is rendered as a slightly unflattering bulbous lump, much like a prone Edward Lear figure, while the distended drawing of his instrument is certainly something Spike Milligan could relate to. Flaherty gets all of side one to showcase a solo saxophone blurteroo, called ‘The Jellyfish Dilema’. We’ve always enjoyed his solo records, of which we used to receive a lot in recent years. On this outing, the tension lies in his mixed emotions which pour out of the bell of his sax, almost like unwanted effusions from a cauldron; now happy, now sad, now going through complex feelings that can barely be expressed. The man can preach a sermon to the masses, then sound as intimate as a member of your family speaking to you. He can change tack in the middle of a phrase, apparently with a single breath. This happens in real time and is presented as an unedited recording. Not many players who can articulate this richness, nor play it in such an approachable fashion. Toot on, Mr Flaherty.

B side has a short billow released from the mysterious Sam Gas Can. His ‘Untitled’ documents him and his voice performing with just one microphone. He’s squeezing out a thin and painful sound neither from his lungs nor his diaphragm, but from a part of the body that anatomists haven’t yet named, or discovered. This is like an all-vocal, semi-acoustic version of Toshimaru Nakamura’s controlled feedback whine, all the more eerie for being so quiet and unexplained. Completing the B side are White Limo, a trio of players who serve up ‘Strite 15 Noslirana’, a strangely engaging bubbling broth of live electronics and percussive effects. The intermittent signals they wrench from their malfunctioning equipment are a big part of the charm. Not noise; the sounds they make may be jumbled, chaotic, even half-mad, but they are not aggressive or lazy dollops of shrieking high-volume drubbage. The only thing keeping this nebulous thing aloft is the irregular pulsations which emanate like toy car alarms from the midst of the gaseous puffs. Quite fine…I see Jess Goddard is also in Fat Worm of Error along with Chris Cooper, and the latter has links to Caroliner, those Californian nutcases who were regarded as heroes of free noise in the 1990s. Since this 2012 LP, White Limo put a solo LP out on Fogged Records which may warrant investigation.

As indicated, this LP has no fear of being labelled “parochial”. Even more of an insiders-only record is the private-joke pressed on vinyl called Fuck Brett (FEEDING TUBE RECORDS FTR085). Recorded in a single day, and the occasion was a birthday party performance thing organised by Lisa Crystal Carver in honour of Brett Robinson, and the event included fine art painting, stickers, and musical performances from assorted marginal illuminati. Carver is Lisa Suckdog, a writer with no fear of extremes or taboos, who is considered to be extremely influential on the American punk / underground of the late 1980s and early 1990s. I have no idea who Brett Robinson may be. He apparently isn’t very popular, as many people on this record spend a good deal of time attacking him personally. The opening songs by Moose on the A side are enough to frighten away most sourpussses, and they’re indistinguishable from the general tipsy roaring and whooping of these happy American folks at this bizarre bacchanal where all inhibitions were checked in at the door. The longer workout by Big People Band – in fact a one-time offshoot comprising members of Egg, Eggs – is slightly more palatable, where the extemporised vocal chant is barked out to the accompaniment of primitive uke strumming and queer synth noises. The band sound like they’re walking around the room as they make up this hale and hearty nonsense. Improvising on the theme of Brett’s birthday, the chant wastes no time in giving said Brett an avant-garde version of the “comedy roast”, as the singer makes it clear how much said Brett is loathed by one and all. Then they start free-associating on the idea of giving birth, and the piece turns “shamanistic” as the troupe attempt to re-enact a birth-passage psychodrama right there on the floor. Unbridled screaming and hilarity ensues. I’ve not read a single line of Lisa Suckdog’s prose, but I’m guessing that this performance comes close to embodying the spirit of her work.

Assuming you were tempted to purchase this very limited record, you might fare better with the B-side which features two noise projects, Belltonesuicide and Diagram: A, engaged in a sweaty arm-wrestling match over a bank of shrieking synthesizers, or live electronics of some sort. Unlike the very specific A-side, this side is blank and abstract. It’s wall-to-wall, blanket-coverage loopy noise that takes no prisoners, but not as violent or insufferable as Merzbow despite the airless tone and pulsating repetitions. Those involved seem to layer on the effects like they were serving up triple-scoop sweet goodies in an ice-cream parlour. Chris Blair – also known as Abortus Fever – is Belltonesuicide, while Dan Greenwood is Diagram: A, and both have been unleashing free noise in the free world since 1997. 100 copies were made with paste-on covers, and a full-colour booklet with text and images is inserted.