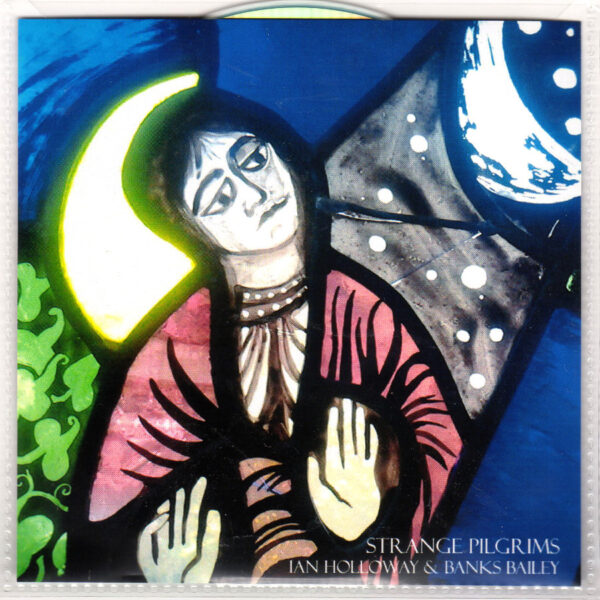 Here’s a teamup between Ian Holloway, the English mystic who I think resides in Swansea, with the American fellow Banks Bailey, nomad of the Arizona desert zones. Strange Pilgrims (QUIET WORLD FORTY FOUR) is a single half-hour cut, for the most part assembled and montaged by Holloway using as a starting point a field recording of a Hermit Thrush sent to him by Banks. True poets have already identified this bird as significant; according to Walt Whitman, the Hermit Thrush stands for the voice of all Americans when he wrote a threnody on the death of Honest Abe Lincoln. Said Thrush also trills a melody in part of T.S. Eliot’s The Waste Land. I say this to confirm smart choice on part of Banks. But that’s also a considerable burden to place on the beak of one poor bird. Can Holloway up the ante on these poetic predecessors? He’s man enough to try. He radically repurposed the song of that bird through extensive treatments, making cutups and varispeed interventions, until he had “what sounded something like a bamboo flute”. Holloway then proceeded to add his own field recordings to the tableau – mostly of a water-based nature – and additional wispy, ambient electronic drones of his own manufacture. This “blending” approach is nowadays a commonplace among many musicians and sound artists, so what I claim is distinctive about Holloway is his (a) his sense of atmosphere – Strange Pilgrims reverberates with a spooked-out, twilight vibe that verges on the occult – and (b) his deft, light touch in making these subtle assemblies. He didn’t just throw sounds together in ill-suited juxtapositions; rather, he worked hard to achieve a perfect equilibrium between the natural sounds and the electronic / digital interpolations, aiming for due diligence with the Thrush as much as the environmental feeling. He succeeded. This unassuming gem weaves a potent spell and casts a strong mood. Perfect listening for the midnight hour. Cover art is from “a found stained glass window”. I wish Holloway could have named which church he found it in, unless he found the window lying under a bramble bush. Clearly it’s modern. Maybe an ecclesiologist could identify the image for us. From September 2013. 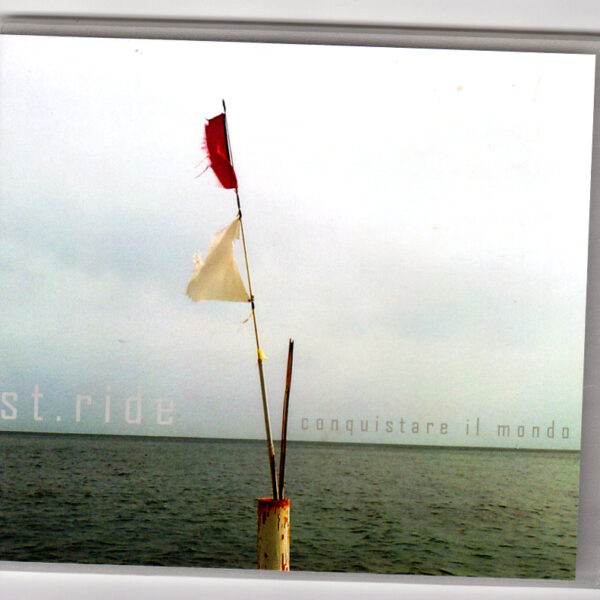 Recent missive from underground Italian electronics duo st. ride is Conquistare Il Mondo (NIENTE RECORDS VOLUME 11), a title which translates as “conquer the world” and which is underscored with a cover of two pennants at sea which may mean something to a mariner or swimmer; anyone well versed in flag signals is welcome to write in with useful information, please. Given the Marxist bent of these highly critical Italian creators, the title may well refer to the current state of monopoly Capitalism and its inexorable grind, but may also be an ironic comment on this band’s chances for financial success on the order of One Direction – not that they’re actively seeking same. As regular readers may know, we’re very keen on st. ride’s “primitivo” approach to belching forth fiery tranches of synthesized and rhythmic noise. What strikes me about Conquistare Il Mondo is that the abrasive edges I usually expect to hear (I have a special tin helmet which I wear when playing their records, with their name painted on the front) have been slightly mollified in favour of strange, detuned, continuous drone effects and remorseless pulsations, such that you’ve only got to put the CD on and the entire air is filled with invading flying saucers in a matter of moments. The pace and tempo varies from a torpid, malevolent gloom to a species of joyless dance music, where the practice of hopping about and rubbing your shirtless sweaty body against others in the press of the rave situation is reduced to a mechanical, meaningless action, where the exact inverse of good-time party vibes are what you take home on the ride in the cab at 4 AM. These clear-eyed sharp-headed Genoese bastards Edo Grandi and Maurizio Gusmerini may not be your go-to guys when you need a fun-loving DJ set for your 18th birthday party, but they sure as hell pass on a palpable sense of ugly, growling discontent with the modern world, without even muttering a single lyric to aid their case. All studio recordings on this one; arrived 20 September 2013.