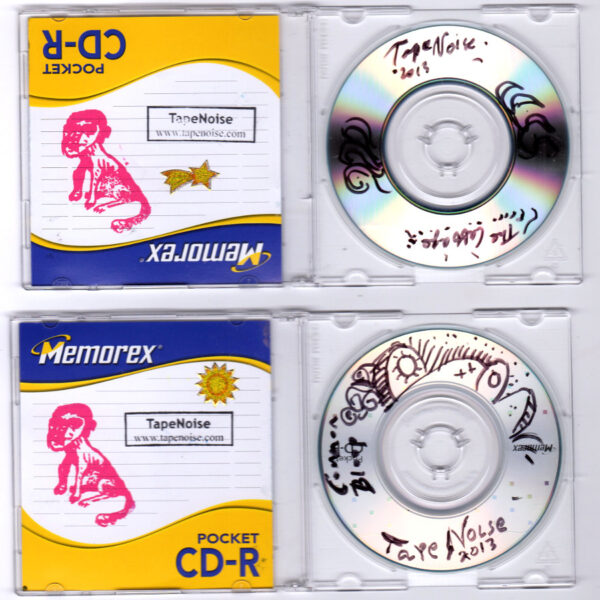 Another odd package received from Tape Noise which arrived here 2nd September 2013. We’ve had a number of these over the years, most recently noted by Darren Wyngarde in a review which also brought forth a supportive comment from one Belle Blue, calling our attention to the unique position occupied by Tape Noise and his community art venue ‘No 10 Decimal Place’. For this latest bundle, Tape Noise sent us a couple of CDRs instead of cassette tapes. The usual practice, if I understand it correctly, is that each cassette tape exists in an edition of one single copy, made available for sale on eBay, under the series “ONeOFF”. These mini-CDRs also have hand-made covers, hand-decorations on the disc surface made with a Sharpie pen and with little attempt to conceal the brand of CDR. The contents, when spun, are likewise pretty inscrutable; low key murmurings, ill-defined events, field recordings that aren’t much more than eavesdropping, bizarre poetry recits, distant droney grumbling…nothing is explained, no context is given, no “track titles” or anything so boringly conventional. Not much to listen to; hardly anything to hear. I’m slowly beginning to get the sense that Tape Noise releases are about as non-musical / anti-art as it’s possible to be.

That said, there is in fact a wealth of contextual detail in the enclosed hand-written letter from Mr Tape Noise (decorated with his own doodles and drawings supplied by his young daughter), which identifies CD 1 as Common Bloop and CD2 as The Cabbage; and now that I look more closely, I can see these titles are indeed written in brio on the covers, in very small handwriting. According to these annotations, The Cabbage “starts with a live recording from a Weird Garden gig in Lincoln at Decimal Place…where a few people from up here have put together some experimental music events. Pete Rollings has helped a lot. I shall see if I can send more of his stuff to you. The other two steam engine field recordings were done in Norfolk from Yaxam and they are un-edited as I always find it so easy to lose the original quality of the recording once you start messing about with it.” I think these statements should persuade you of the seriousness of Tape Noise’s intent, and there are numerous clues provided as to his defining aesthetic.

Further indications are given in another enclosure, this one written in red ink on top of printouts from eBay pages. Here the creator reflects on the place of art in the marketplace, what “publication” actually means in 2014, how art may tend to be defined by those who buy it as much as those who create it, and what happens to the buyer and seller in the process. He positions all of this in the context of social media, mobile phones, and the web, which he claims have “really shaped the way people interact, with regard to selling their second hand goods and home made stuff, with both positive and negative attributes…it is worthy of investigation I think.” He illustrates the trend of his arguments with a diagram which proposes the marketplace as a three-tier structure, comprising Cloud Street, the High Street, and the Underground. A ruler at the side of this chart indicates some form of metric. Notice how the Underground layer contains skulls and bones within the measurable portion of the diagram, yet there seems to be even further activity taking place at a much lower level – a level which evades the scale, and is quite literally “off the map”. I have included numerous scans and photos, for the curious reader to investigate further. Suffice to say this project is asking quite pointed questions about the fugitive and intangible nature of art, yet doing so through a continuous (and presumably quite prolific) stream of tangible product.