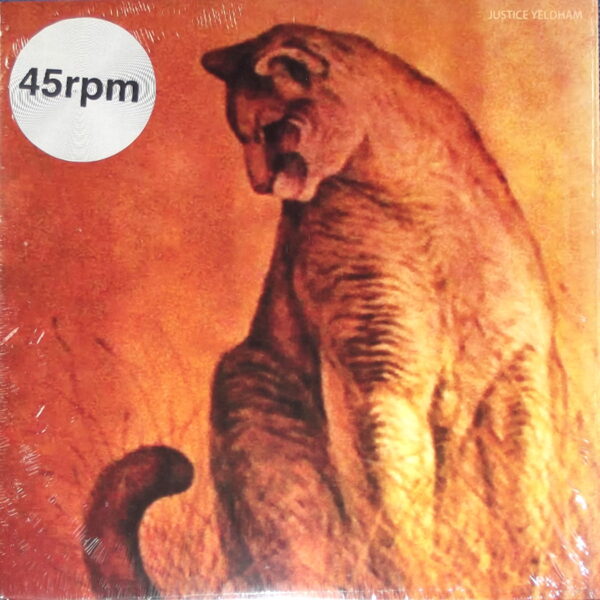 I have never seen Lucas Abela perform his notorious act with the sheets of glass, but now you can purchase a short 45 RPM 12-inch recording of this remarkable phenomenon on Popped In The Head All The Time Now (FEEDING TUBE RECORDS FTR108), which was released under his Justice Yeldham alias. The press notes describe the method by which this Australian wild-fellow uses sheets of glass, salvaged perhaps from building sites or derelict factories, adds contact mics, feeds them through electronic effects, and then blows with all his might against the surface of the glass with his lips. In fact, the process is likened here to playing a trumpet, albeit in an extremely limited way; like a trumpeter who gets as far as forming the embouchure, then applies it to anything other than a trumpet. If you listen closely enough to the feral, inhuman sounds on this slab of vinyl, you can derive some information that connects it to a human action – a bit like a doting father blowing raspberries on the tummy of their baby, only exaggerated and rendered into an extremely grotesque form by means of amplification and distortion. As music, it sounds somehow constrained and constipated, in spite of the fizzing emotion and agitation which has fed into it. A reserve of energy without an adequate outlet, a steam kettle that is perpetually on the boil, with no valve for release, not even a whistle. I suspect the truth is that it’s not exclusively the sound that matters, and you really need to witness Abela cavorting physically on stage to get the full effect, and I leave it to you (or your imagination) to retrieve yarns and anecdotes about this, many of which wallow in the violence and the bloodshed. Although it’s likely that’s all in the past now. When I did see him live in London in 1999, he performed using turkey skewers with phono cartridges on the end, which he stuck into his mouth with ferocious abandon. Are you a musician, or a performance artist? I asked him afterwards. “Entertainer,” he replied firmly. “I don’t like to put any luggage with it!” He was at pains to stress than he wanted people to like him and his act, so worked hard to shed any notion that he might be a boring, worthy, serious-minded performance artist. I suppose growly and abrasive noise records like this one can only be an appendage to the visceral mess of his live act, but this beast is still worth owning and spinning as needed. From January 2013, 300 copies only.

The LP MuLTiLiNGuaL SaD SoNGS, WeiRD JoKeS aND eXPeRiMeNTaL STuFF FoR uSe By GRoWN-uP CHiLDReN (FEEDING TUBE RECORDS FTR118) by BeNe GeSSeRiT is an indescribable mix of vocal experiments mingled with musical interludes, performed by the husband and wife team of Alain Neffe and Nadine Bal, who call themselves B. Ghola and Benedict G. respectively. These Belgian creators are well respected in the international Industrial / experimental music world with a string of releases going back to 1981; matter of fact some of this material dates back to the 1980s and 1990s, and has been previously released on the Falling Dreams CD on Opcion Sonica and the Norwegian Schizofrene Festsamler compilation cassette, although this is the first US release for th’ tracks. I’d situate it in the area of text/sound art with a vague New Wave feel; it’s all about mangling the spoken word. English, French and Japanese tongues are reduced to atomic particles and reassembled into dribbling nonsense, and both performers affect annoying high-pitched speaking voices and Monty Python-esque inflections to add further barriers to our understanding. One track title suggests that the Surrealists’ “Exquisite Corpse” method may have been used at composition stage, but one doesn’t sense anything like the controlled dreamlike mayhem that a cut-up approach might have introduced to the experiments. To accompany the vocal recits, we hear half-baked melodies played on synths, accordions, guitars, or music boxes; many of these tunes are palpably sarcastic in the way they imitate the sort of Euro-bland background music I’d imagine gets played in French and Belgian shopping malls. This dumbed-down approach betokens a degree of snide contempt for the listener; they’re treating us like children. I’m trying hard to regard this as a serious sound poetry LP, but it’s lightweight; it has none of the attack or coherence of Henri Chopin or Paul de Vree. I’m afraid I find virtually nothing to recommend in this silly record.