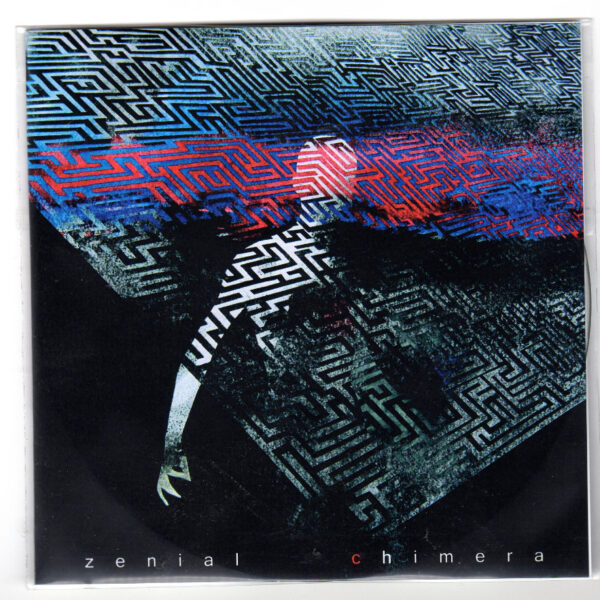 Zenial is an alter ego of Lukasz Szalankiewicz, a Polish composer and sound artist who has been putting out experimental electronic music in a variety of guises since the 90s. Chimera offers us five tracks of modular synth doom composed during a time spent among the Buchlas and Revers at the legendary EMS studio and research facility in Sweden. That distinctive chunky sound permeates these tracks, placing it squarely within this growing sector of the experimental music world.

Nevertheless there are some delights here that make this release stand out from many of the patches and wires gang. The title track is one such beauty, kicking things off with a series of abrasive squiggles and hums. Lacking any forward structure, it is instead a series of sound bursts, an electron microscope bringing quantum particles into brief focus as they fizz into existence for a few seconds before vanishing forever into the void.

The more I listen to it the more I’m entranced by this piece, by its sense of space – rendered even more tangible and clear by Rashad Becker’s impeccable mastering – and its choice of sounds. Around three minutes in a beautiful chattering polyphony fades in, flooding the soundworld with the excited chattering of alien children. A minute or so later, Szalankiewicz builds a delicate collage bleeps and glitches, set against a blanket of cicada-like chirrups in the summer night.

In contrast, ‘unclean/clean’ is a sullen and gritty thing, at crowded with fuzz and static, building to a heaving crescendo of ecstatic white noise.

Both pieces deploy a surging, repetitive drone is tailor made to drill into your skull and force you to its bidding. On and on it goes, tension growing to almost unbearable levels. On ‘Rosara 28’, Sza?ankiewicz weaves whirling synth motifs around the monolithic chiming, spinning and glistening like giggling daemons.

Its companion piece, ‘Rosara 28 : wymar 4/5’ is brooding and malevolent, with only the occasional gritty burst of noise to leaven the oppressive effect. After nearly ten minutes, the drone fades. Suddenly the only thing we hear is birdsong. The spell is broken.