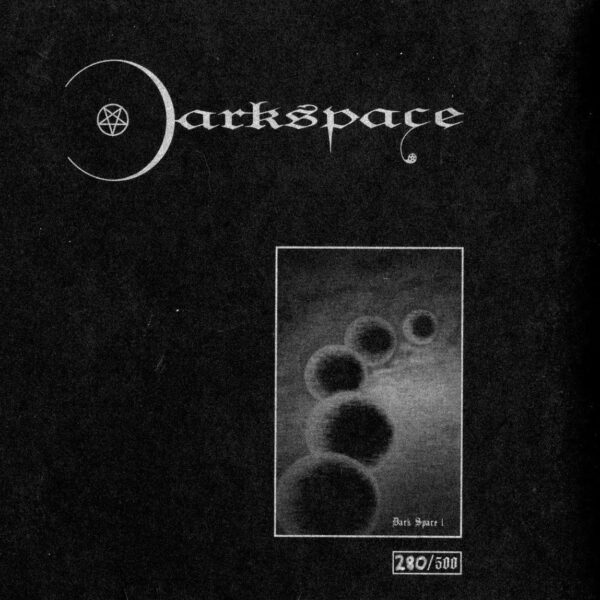 Finally I’ve been able to hear the first album in Darkspace’s trilogy of cold immersive space-ambient BM albums, mainly for the sake of completion. In comparison with the other Darkspace albums, this first set sticks closely to militaristic black metal, delivered a little too efficiently in the manner of machines inhabited and driven by an insane and malevolent spirit. That’s meant to be a compliment to the Darkspace trio of musicians themselves. All three recordings are inspired and powered by a vision of space and the cosmos as essentially indifferent, and maybe even hostile, to the existence of humanity; the message is that we are on our own and if we are to continue to exist, we must do so without help from external powers. A supreme God will not save us because such an entity does not and has never existed.

The beast is born in utter black cavernous emptiness amid shifting, groaning echoes, sighing whispers and cries of lost spirits. Suddenly the music jets off into the high atmosphere, all bristling noise and crunching jagged guitar battery riffs, eerie background synthesiser tones and a cacophony of gabbling demon voices caught up within the tight maelstrom. In the second track there is a sample of dialogue from the Stanley Kubrick film “2001: A Space Odyssey” in which the computer HAL is interviewed by the BBC and states that it looks forward to working with humans. As the track progresses, the music speeds up to a frenzied and extreme level, the screaming grows more demented, drums and cymbals are pounding away, and the synths sigh on as if in a frozen catatonic state.

The musicians concentrate in the main on building up an overwhelming, enveloping structure that sweeps up listeners and carries them aloft on an interstellar journey between their ears. You can’t help but be absorbed by it all. The evil and deranged atmosphere completely swamps you. Within the music, hideous beings converse and plot the course of the spaceship careening through the cosmos at multiple times the speed of light. One mistake, the ship lurches in another direction and the monsters scream and howl their lungs inside out and back gain. Lead guitar hollers away in a wormhole and drums bang on in a non-stop frenzy.

Admittedly the music is not varied and tends towards the obsessive and extreme in its single-minded focus. That’s the whole point of the recording: its very derangement and seeming lack of anything resembling human nature or anything organic mean that there is no concept of limitation where the music is concerned. Whatever direction is set for it, it continues relentlessly down that track. Everything takes place in a nihilistic universe; concepts of good and evil are neither here nor there. You’re not asked to love the music but you have to admire it anyway for its pure nature, steeped in what we would consider evil and malevolent.

It’s only in Track 1.6 that we get the first hints that the music might be slowing down just a little and a certain despair, a moment of bleak desolation, appears beneath the layers of compulsively grinding guitar texture. But these hints lead nowhere as the maelstrom moves with a force even it can’t control. On and on it goes, and even when the album appears to wind down and the music fades away, there’s still a sense of a never-ending journey into infinity and beyond.

Nevertheless whether this journey ever has an end or not, it is a journey worth taking for those brave enough to question the nature of the universe in which we live and who want to know more beyond what they’ve been taught to believe and found wanting.