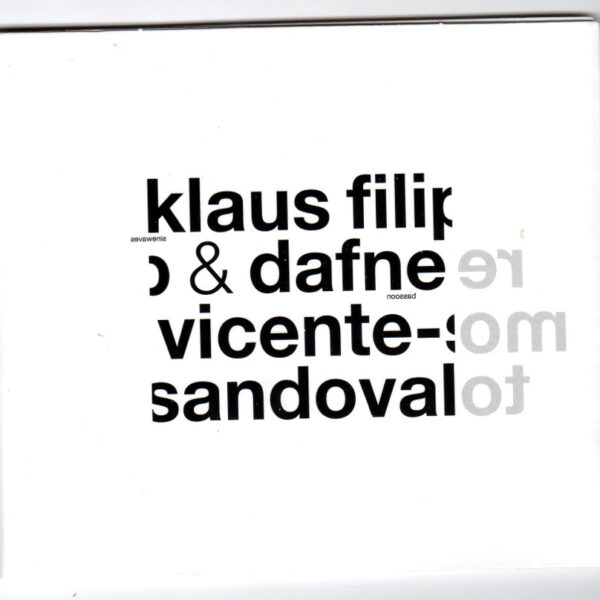 Klaus Filip I know has an extensive back catalogue including projects with Tim Blechmann, Toshimaru Nakamura, Radu Malfatti, Mattin, Nikos Veliotis, Andrea Neumann and Ivan Palacky, is the creator of the ppooll/lloopp music software and boldly claims the possibility of being the first ever Viennese musician to ever use a laptop in a live performance. Dafne Vicente-Sandoval is a new name to me, but I gather she has worked with Bonnie Jones, Angélica Castelló and Xavier Lopez; as well as in trio with Sébastien Cirotteau and Lawrence Williams, and has recorded two compositions by Jakob Ullmann which were released by Edition RZ in 2012 as part of the cd box-set fremde zeit addend.

Remoto was recorded at Amann Studios – Christoff Amann seems to be the EAI go-to producer of the moment – whose notable clients include Christian Fennesz (who is resident in Amann’s Studio B), Barbara Romen, Kai Fagaschinski and Gunter Schneider whose album Here Comes The Sun was released on Mikroton and comes highly recommended by this reviewer, and also David Sylvian’s half-digested improv construct Manafon.

So, a necessary overview of Remoto. There is a lot of high frequency information here. A lot. I’ve already got the beginnings of tinnitus so I’m less enamoured of this kind of approach than perhaps others might be.

This album fits the remit of minimalism, vaguely. It is possibly Reductionist with a small “r”. Remoto – nothing to do with those novelty miniature racing motorcycles, or “mini-motos”. When I visited Corsica in the 80s, I was struck by the young age at which the locals were allowed to ride motor scooters, or “motos” as they were known back then. These kids would come screaming round the blind bends on the mountain roads, helmetless, thirteen year-olds, sheer drops on one side; no Armco; mountain roads with burned out cars, desiccated landscape, the vague threat of banditry, all the while trying to make sense of the gearbox of a hire Citroen 2CV.

To me, this music is what you might expect from sine waves and extended bassoon techniques – pleasantly reduced, long-form, until some very harsh high end squeaks halfway set against an underdeveloping bass drone. One early listen through was in a village car park on a sunny mid-afternoon with plenty of distant but nonetheless distracting builders’ saws and drills and so forth which would ordinarily slot right in with this kind of music… Then the high frequency information kicked in – I don’t know if it is my knee-jerk fear of tinnitus but I had to turn the volume down pretty swiftly. But then car stereos are not the most forgiving playback devices. At least mine’s not. I resolved to persevere with “Obscur” at home on decent equipment.

When spinning “Obscur” at normal listening volume you might say it’s a barely there-type listening experience. Pulsing wisps of sound. Boost your amplifier’s volume control and you’ll become aware of a lot of information played very quietly. Thus, this elevated volume serves to foreground the following substantial low-end of the bassoon (or it could be Filip’s sine waves), an effect I find very pleasing. I’ve occasionally noticed recently releases which have included disclaimers on their sleeves recommending the listener not rely on their laptop’s built-in speakers. I should say that this advice applies here. Too much would be inaudible on laptop speakers or most standard car stereos; but on headphones you might be risking your hearing due to all the high pitched tones – a half decent hi-fi system really is necessary to get the best out of this. Even then, when the high end information kicks in around 18 minutes, it is still uncomfortable listening. I found myself dipping and raising the volume on the amplifier a lot.

“Clair” starts with yet more high-end frequency information. If you were watching a concert performance of this material, you could argue that a man producing sine tones with a laptop is not as interesting to watch as a bassoon player presumably employing a range of extended technique, but there is little visual imagery to accompany your dry experience of playback of the disc. Furthermore, I would imagine huge chunks of the frequency range of this music will be inaudible on most domestic-quality built-in pc speakers, but would you risk your hearing by using headphones? I avoid headphones myself as a matter of necessity. As “Clair” begins with high pitched sines again and keeps it up, I found I couldn’t physically listen to this without it affecting my mood for the worse. Is this a deliberate strategy by Filip and Sandoval? It’s a brave and commendable act if it is deliberate, but pushing boundaries is one thing but I’m not joking this is harsh. The second half drops into gear with some drone based action, hopefully. Yes. Yes, yes…no. Look: here’s more pointless high pitched squeaking. I’m not really enjoying this. It’s frustrating. There’s some good music here I’m not being allowed to hear properly. Overall, quite a lot of nothing happens. I wonder if Filip has included a lot of information that is out of the range of human hearing. An interesting approach if true. Dogs may benefit. Filip seems to lean heavily on a linear range of variable sines and not a lot else. I have a copy of his collaboration with Tim Blechmann, The Organ Of Corti, where he uses similar instrumentation to more devastating effect.

The cover and disc feature an image of what looks to me like an image of the night sky – a constellation of stars – but it could just as easily be white spray paint on black card or dust motes floating in front of dark fabric.

Potlatch has been supplying excellent releases of improvised music since 1998, when they kicked things off with No Waiting, an Anglo-French meeting of Derek Bailey and Joëlle Léandre. Since then, they have built an illustrious catalogue including contributions from international improvisors including John Butcher, Xavier Charles & Axel Dörner, Phil Durrant, Bertrand Denzler & Burkhard Beins, Jean-Luc Guionnet & Toshimaru Nakamura, Seijiro Murayama & Stéphane Rives and Keith Rowe & John Tilbury.