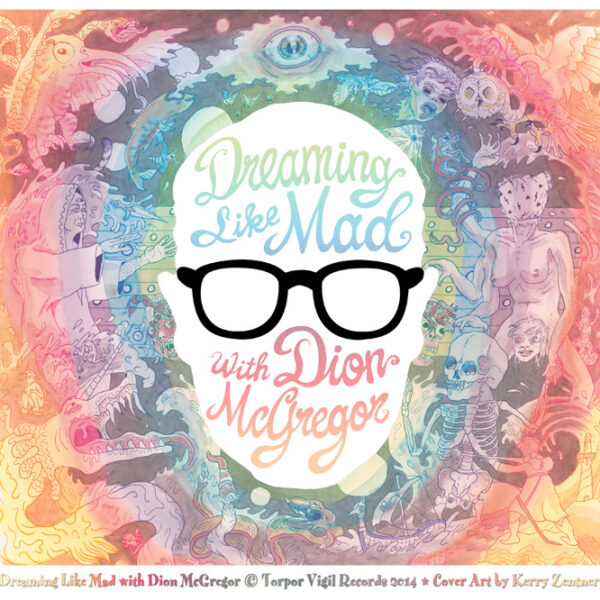 Celebrating the 50th anniversary of the debut release of the first Dion McGregor recording, titled “The Dream World of Dion McGregor”, the appropriately named Torpor Vigil Records has released a fourth chapter (and second for the label) of this New Yorker’s hilarious somniloquies. The story of “Dreaming like Mad with …” is interesting in itself: TVR committed itself to raising the funds to make the record through crowd-sourcing in early 2014 and had the album ready for release by July the same year. The result may not have as many tracks as previous releases – the album under review features just 15 dreams – but they are no less bizarre and surreal; if anything, this recording is probably more accessible to a larger and more mainstream audience.

Compared to the other Dion McGregor records that I’ve heard and reviewed for TSP, this album has no really jaw-dropping moments that compare with anatomically awesome fairground acts, a TARDIS house of torture chambers, a menagerie of centaurs and griffins, a giant female statue (a version of which did once exist in Chicago in the form of an alarming Marilyn Monroe statue whose flying skirts did for a time provide shelter from the rain) or dancing the Snail-Time and then teaching a shy dance partner how to say “I am Dolores!” in a mincy voice, though a few do come close. “The Face Down There” will be the big pick in this respect: it’s about the narrator meeting a character whose face is below her waist and above her knees in the worst possible place and who fantasises about meeting a man just like her. As on the other recordings, several dreams present as little comedy sketches with a first-person viewpoint about the social situations one might find oneself in: a group of people play with an unusual ball in “The Head Game” and introductions are made at an unusual party in “The Gauntlet” where people are subjected to an unusual drilling … with machine guns.

The fact that several dreams revolve around social gatherings or situations that at first seem very conventional and which gradually reveal their oddball nature may say something about McGregor’s inability or disdain (or both) for fitting into mainstream 1960s US society, not yet touched by the civil rights movement or the San Francisco hippie and acid rock scene.

The only dream here that is truly subjective and impressionistic is the very short “Chocolate Tapioca” – all other dreams are amazingly well-structured and follow a definite and coherent narrative in a conversational tone. McGregor often appears to be addressing unseen others or even the person taping his dreams (this was his room-mate Mike Barr who zealously made hundreds of such recordings and preserved them). As with previous albums, “Dreaming like Mad with …” contains several dreams that end with McGregor screaming himself awake and one “Take My Life” where he wakes up sobbing because the pass-the-parcel game has ended with someone dropping the precious parcel. This piece is one of quite a few creepy and ghoulish dreams that pop up across the corpus of Dion McGregor records, made all the more icky and spooky by the casual and conversational way in which death is worked into the dream and the sheer terror that grips McGregor’s voice as he narrates the content of whatever has seized his mind.

One aspect of the McGregor recordings worth mentioning is how heavily they draw on popular culture and society of the 1960s, and how as a result they offer some insight into the things people valued and what they believed were important then. Dating and marriage at a young age were important in those times, and social emphasis on young people marrying early and respectably is satirised in tracks like “The Face Down There”. For what it is worth, the fact that McGregor was homosexual and might have experienced some stress as a result of this and general social attitudes toward homosexuality and gay people possibly informs those dreams like “The Face Down There” and others where women are subjected to odd treatment such as having their heads tossed about. But we have no way of knowing if a link does or does not exist as McGregor died in 1994; in any case, what appeared out of his subconscious should not be construed as representing what he actually believed.

As with previous Dion McGregor compilations, this one comes with a booklet about how the dreams were recorded by Barr who, in an even more bizarre turn than the dreams themselves, had plans to turn some of them into a musical. I’m rather thankful that such an idea never came to pass; I have trouble enough as it is accepting Hollywood movies and Queen albums being turned into musicals. I wouldn’t like to see McGregor’s dreams being exploited in any crass way and as long as their public presence is restricted to audio compilations, I will be quite happy.