Great four-track 12-inch EP by The Slate Pipe Banjo Draggers, called Peeled Up For The Sake of Fruit Music 2012. This is the work of Londoner Andy Rowe, and it’s a superb slab of lo-fi grunged up collage-techno nonsense, making a mockery of most beat-based musical genres while still retaining a strong and unignorable rhythm of its own. How does he produce these clanking, heavy, churning rhythms, which are almost like a toy-robot version of drum tracks from Can albums? He seems to be layering together several loops which don’t quite match up, and at times produces the effect of an old Gibson Les Paul being used as a drumkit. Plus there’s plenty of lovely abstract noise, general scruffiness, and obscured sampled voices. The posh Southern lady telling a banal story on the title track becomes a completely surreal personage in this context. Lovely! Last noted the work of this talented multi-media creator with his Prime Bolus Music 2010. 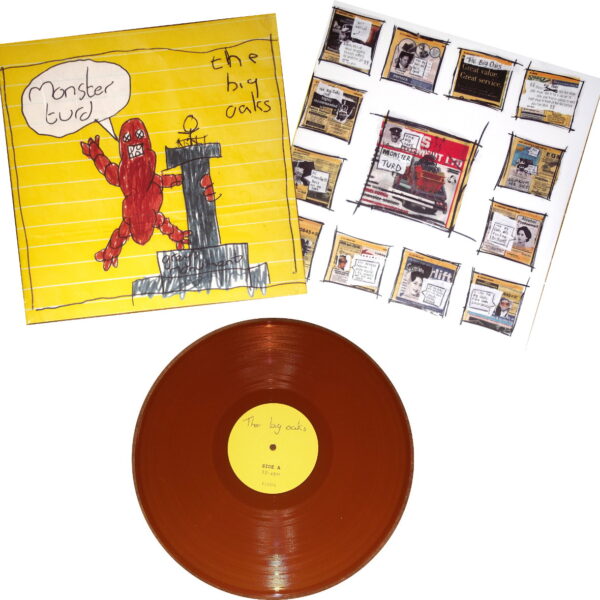 The Big Oaks are or were a “pop-punk” band from Newcastle Upon Tyne, and the album Monster Turd (DISTRACTION RECORDS DIST20) is intended as a tribute to the band’s main man John The Rat, also called Simon Windsor – the songwriter and personality behind this little-known but remarkable band. I’ve been unable to date the music, but Windsor died in 2012 and it all seems to have been very recent, which surprises me as it reminds us so much of Half Man Half Biscuit, Ted Chippington, or even some earlier antecedents like cassette-band unknowns The Twizzlers. Yes, The Big Oaks have a very twisted and black sense of humour, and the lyrical content comprises John The Rat’s wackoid and warped view of UK popular culture, refracted through the twin lenses of television and football, but mostly representing his own unique thought patterns. No quirkoid observation, no matter how trivial or pointless, is overlooked in Windsor’s world, and he seemed to have an uncanny ability to turn each odd detail into a short song at the drop of a hat. The rest of the band are not especially talented – you won’t want to tune in for inventive chords or dazzling guitar work, and most of these 28 songs are as simplistic as an adult nursery rhyme, with clunky 4/4 beats and very basic axe-shredding moves. But that’s all that’s needed. The label, also Newcastle based, got this release funded through a kickstarter project, and while I can’t quite share their view that The Big Oaks are “real outsider music, folks”, there’s no doubt that The Shaggs comparison is appropriate. Absurd, lively, incendiary stuff with deranged singing with lots of songs about sex and monsters, and it’s pressed in coloured vinyl – how can you resist? 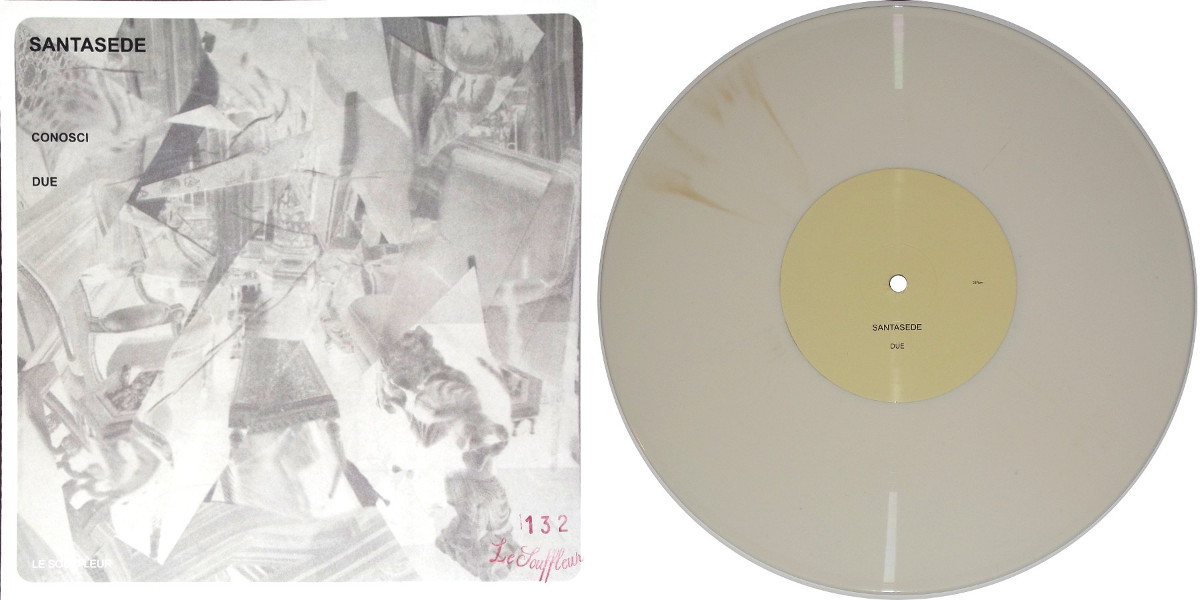 Santasede‘s ten-inch (LE SOUFFLEUR 74) is on Raymond Dijkstra’s imprint and I expect we received it along with the horrifying NIvRITTI MARGA item noted here. It has a similar cover image, cut-ups of photos of antique furnishings, only now printed in negative. Grisly, nerve jangling metal percussion is to the forefront of both sides of this white vinyl slab; lurking in the background are quiet but fatally sinister chords of a murderous nature, lurking like shrouded assassins. The entire release is a ghostly vision, hinting at a dissipated European past of decadence and ghastly buried family secrets. It’s like the soundtrack to an Italian horror movie, only nowhere near as lurid as you’d expect from your typical Dario Argento gore-fest, and if a cinematic abortion existed to accompany this unsettling music, it would be a severe psychological horror of such monstrosity that viewing two reels of it would send the cinema-goer straight from the theatre to the bughouse, transported in a special truck constructed for the purpose with padded walls. Santasede is a collaboration between Raymond Dijkstra and Tiff Lion; Tiff, who might be better known to Italian indie-rock fans as the singer Tying Tiffany, provides the eerie voice work, electronic music, and acoustic instruments. Chilling, distant, alien.