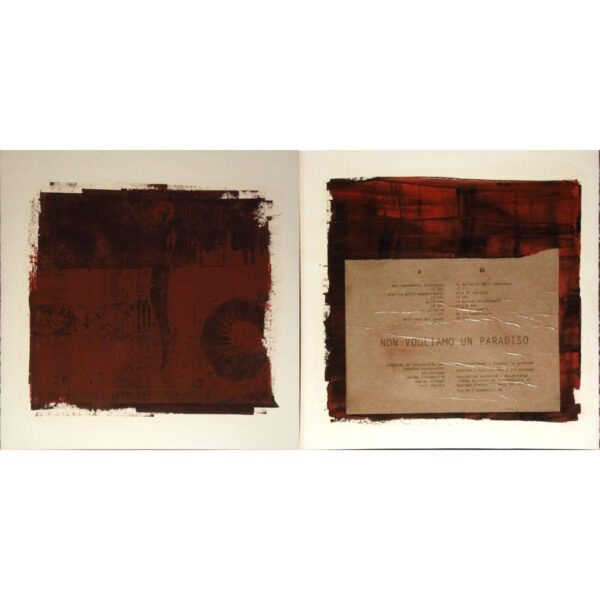 The ten-inch LP Non Vogliamo Un Paradiso (KOMMA NULL 08 / SUARA 05) by Oleo Strut is from the French label who also sent us three cassette releases, noted here. The musicians are a five-piece of French and Italian freakoid musicians, including Roberto Bertacchini and aka_bondage. They produce an utterly bizarre melange of electronic squawks propelled by errant beats, occasionally punctuated with mad semi-operatic vocalising. There’s lots to recommend in their illogical and erratic approach to studio craft, but in their rush to embrace every type of strange noise they’re capable of producing, they overlook the fact that the combined results can be quite ugly and unappealing. It’s like hearing a nightmare version of 20th century classical avant-garde music strained through the boiling brain of Aphex Twin. Arrived 18th October 2013. 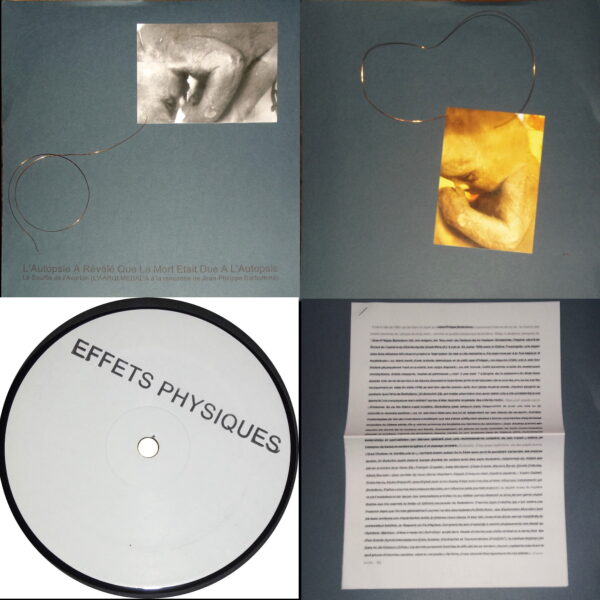 An equally grotesque item is the album by a band who call themselves by the elaborate name of L’Autopsie A Révélé Que La Mort Était Due A L’Autopsie, and the title of their work might be Le Souffle de L’Avorton (KOMMA NULL 14). Very coincidentally, aka_bondage is one of the band members, along with Frank de Quengo who used to run Bimbo Tower in Paris, the very singular French fellow Ogrob, and Alan Courtis, everyone’s favourite Argentinian loon. Ogrob, who may also be Sebastian Borgo, wreaked permanent havoc on the minds of many with the Micro_Penis album, a ghastly and crapulent record which we savoured here. The work here, which is divided into two halves describing ‘Effets Physiques’ and ‘Effets Psychiques’, appears to have been realised by mostly acoustic means – prepared pianos whose exposed strings are strummed, trombones, and strange percussion, all conspiring to produce very deep and unusual effects. The resonant drones on ‘Requeim en fa magique’ are particularly strong. I ought to stress that this is certainly not “improvised music”, follows none of that genre’s precepts, and instead the players here seem intent on capturing a very dark, sweaty, and fleeting sensation with their mysterious actions. It comes across as a very solemn parody of serious music, played by sombre clowns who wish to expose the absurdity of all existence in a weird burlesque. My impressions are bolstered to some degree by the lengthy insert, which purports to give a scholarly account of the life of one Jean-Philippe Borbollono, a non-existent French composer. Three pages and nine footnotes are expended on adding convincing details to this ingenious literary and musical hoax. The special edition I was sent includes postcards, and a length of copper wire you can use to garrotte yourself after you’ve heard the record. We’ve had the solo LP by trumpet player Peter Evans, Beyond Civilized And Primitive (DANCING WAYANG RECORDS DWR007), since November 2011, and after several plays I have been constantly stymied in my writing, unable to find anything useful to say about it. I find the music difficult and unmemorable. I liked his duo with Nate Wooley, on an album called High Society. There’s no doubt that American trumpeter Evans is in a class of his own, he’s taking the idea of “extended technique” into a very extreme dimension, and he’s great at circular breathing – a method which he may have learned from his time with Evan Parker. He’s also very clever. The title of this LP, and all the track titles, are derived from an essay written by a philosopher called Ran Prieur, who describes himself as a “softcore doomer” and one “who writes about dropping out of society, the critique of civilization, sustainability and the collapse.” Evans represents the ideas of this latter-day Guy Debord to such an extent that the first track on side B, which takes up an entire six lines on the printed insert, is almost a mini-essay in itself, condemning just about every feature of 21st century late Capitalism in a concise and punchy, but still very chatty, prose style. As ever, Anna Tjan recorded the LP in her Eastcote Studios, and it’s released on her own label in a limited run. I like the cover artworks by Owen Gould very much.