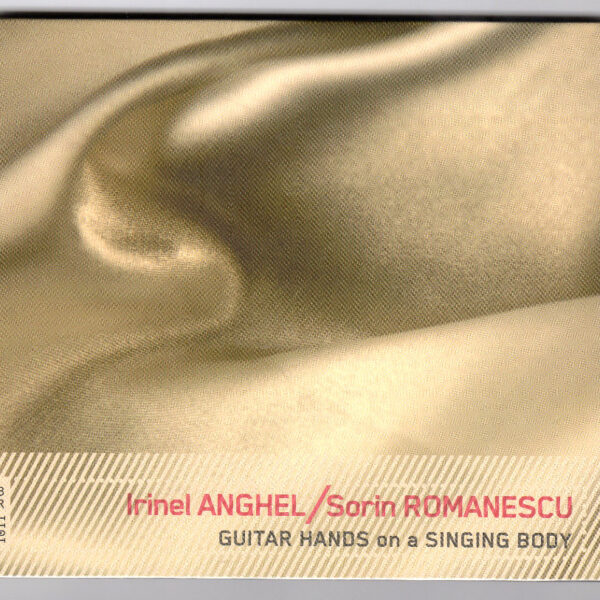 By subverting the role of singing in popular and folk forms, Irinel Anghel and Sorin Romanescu have produced a record which playfully studies the human voice. The voice, and more directly the female voice, is the central conceit of Guitar Hands on a Singing Body. Yet, the effect is created by ensuring the only vocal contributions are wordless syllables, gasps and birdsong trills; free associative stutters and fragments of a conversation you can never quite tune in to. Like recent records by Holly Herndon and Karen Gwyer, ideas of communication and subjectivity are explored by manipulating the voice as instrument and the work here deserves recognition alongside these names.

For every grunt and uncomposed thought from Anghel there is an equal response from Romanescu’s guitar, whose blunted folk playing here is both oblique and lyrical. His hammered figures and harmonics are equally inhibited and rough. Despite this, the singing tends to dominate and it is both daring and technical. Irinel is a renowned composer of orchestral works and here the voice is split, divided and multiplied into miniature themes and fugues framed by the meandering guitar and blemished by minor processing. Anghel tends to emphasise guttural phrases, recognizable sounds which don’t come together how you expect them to; syllables which begin and then waver unfinished.

Enjoyment of the record hinges on grasping the purposefully retentive nature of the pieces. The tracks are extremely repetitive, never really beginning, in any sense of the word. Like a tape collage or automatic writing experiment performed live, there is always an inhuman quality to them. In fact the weakest songs are when the sounds are allowed to coalesce into form and structured playing. The repetition and extreme minimalism never fits into a model of repetition; it doesn’t build a groove to crescendo or bring about a meditative trance, it simply gets stuck on an idea it can’t overcome.

It’s fascinating to see guitar and voice recast outside of their common roles, yet the record never feels demanding or difficult. Ranked amongst the boldest experimental approaches to singing it isn’t revelatory. Yet, something about it is not quite right and it eventually slips into gaps in your perception where you cant shake it out, even if this is achieved through force and repetition.