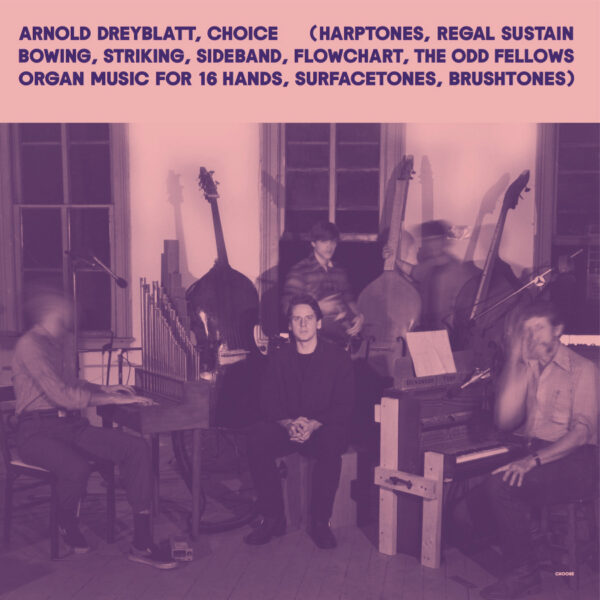 American composer and visual artist Arnold Dreyblatt is often associated with the “New York School” of minimalism, though regarded by scholars as a “second generation” member, and while it’s true he studied under three of the big guys – La Monte Young, Pauline Oliveros and Alvin Lucier – he’s not only found his own unique voice, but he’s one of the least “minimal” minimalists you could wish for. He’s also moved outside of America, having lived in Berlin now for 30 years, so perhaps he’s managed to escape the shadow of the skyscraper and the tyranny of the grid-block street system. I can’t believe I have none of his music in my so-called collection, but now I’ve heard and own this superb compilation of sorts called Choice (CHOOSE RECORDS CHOOSE 7) and issued on vinyl by Choose Records. It’s called this because it’s “chosen” by Jörg Hiller (also called Konrad Sprenger) and selected from Dreyblatt’s personal archive of live tapes, dating from 1977 to 2007.

These ten tracks are gorgeous, simply beautiful music. It’s apparently produced by very simple means, involving bowing stringed instruments (he himself built and developed a modified bass, which you can probably hear on The Sound Of One String from Table of the Elements), harmonics, just intonation, and other instruments sometimes providing rhythmic elements and percussive textures. The track titles directly reflect the means of production and instruments involved – ‘Harptones’, ‘Bowing’, ‘Striking’, ‘Brushtones’ and ‘Organ Music for 16 Hands’. There’s a tremendous clarity of intent, a real honesty in each composition, and that clarity becomes embedded in the sound; what you hear is what there is, no unnecessary effects or embellishment, and it communicates quickly, with a spontaneity and directness that you might not always find in the long-form works of other well-established composers of the USA.

There’s a number of reasons why I have come to think of Dreyblatt as the least “minimal” of the minimalists. 1, the brevity of the pieces – on this album at least, most of the cuts are just three or four minutes long, not two hours or 18 days. 1 2, the utterly compelling richness of the sound he makes, which possesses no lengthy gaps or near-silences, and is joyfully full and resplendent – at times even quite noisy. Let us make a joyful noise. 3, the refreshing lack of “mysticism” in his work – he feels no need to contextualise his work with references to non-Western belief systems, outer space metaphors, or self-aggrandising mythologies. 4, the apparent economy that has been employed in creating the music, which calls for few instruments, and a very focussed (some might call it “reduced”) approach to technique, involving simple but intense bowing and stroking actions to create these gorgeous harmonics. Now I read that back, I see the above list is fraught with contradictions, but I hope I’m understood – the music is simple and direct, and delivers maximal results!

And if I can come up with a fifth reason, I’ll let you know. If I do it might turn out to be something to do with his apparent lack of ego and the way he doesn’t insist on the primacy of the “composer”, a strategy which could in any case be seen as a rather 19th century thing at odds with the “newness” of minimalism. Small wonder that Dreyblatt has proven so popular with musicians outside of the academy and the classical sphere, including the Bang on a Can Allstars and Jim O’Rourke who have performed his pieces, and more recently a folk-psych rock combo called Megafaun, with whom he made a record for Important Records last year. This seems encouraging.

A simply splendid record and while I am grateful for my promotional CD I must try and get hold of a vinyl copy. From February 2014, released in April this year.