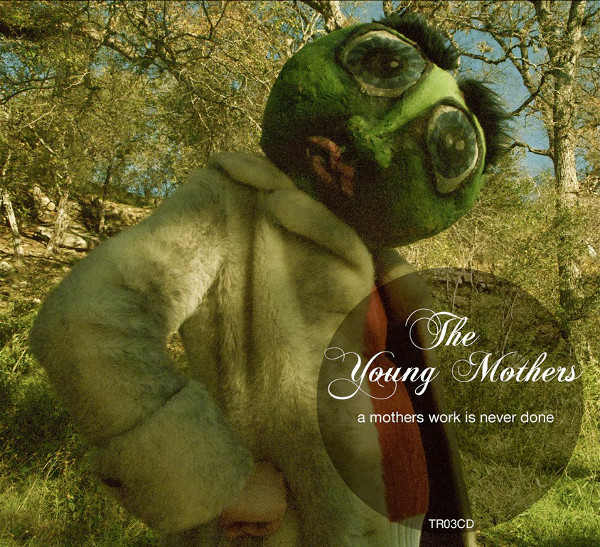 If bored with feeble laptop and noise-doodle “experimenters”, you might find it refreshing to renew your acquaintance with old-fashioned values like craft, skill, talent, and sight-reading. If so today you need look no further than The Young Mothers, an American-based (mostly in Houston) band, but their leader is the Norwegian bassist Ingebrigt Håker Flaten who lives in Austin, operates a record label, and has played in an enormous number of bands while featuring on more than two dozen records of far-out improv and free jazz. It’s especially encouraging to learn he’s worked alongside Joe McPhee, an important and overlooked tenorman whose music I recommend. While you may not be surprised to have noted Flaten performing with Sweden’s wildest reedman Mats Gustafsson, apparently even that experience wasn’t enough to satisfy his thirst for extreme musical experimentation. Hence the record A Mothers Work is Never Done, a crazy and energised record which goes out of its way to explicitly throw together multiple genres – rock, noise, rap, non-Western idioms and atonal modernist composition – so that they co-exist in a sort of rough commune under the canvas of a free jazz roof cut from remnants of overcoats worn by Archie Shepp and Ornette Coleman.

There’s no denying the fire of these performances, and particularly notable is the work of Chicago drummer Frank Rosaly who performs like a cross between a bulldozer and a tornado when he’s released from the magic box; and the rapper Jawwaad Taylor from Houston who’s worked with Jay-Z. Taylor plays the trumpet too, but his abrasive mouth-work on ‘Wells, The Original’ here is unignorable, and this particular track with its frenetic pace and coarsened rock elements is one of the more notable successes within this sprawling experiment. Although the closing track, ‘Ruth’, is even more adventurous in its determination to meld, match and mix musical genres, and comes across like a bowl of spicy couscous mixed with Baskin-Robbins’ creamy best. Perhaps judiciously, the band open the album and meet the listener with their user-friendly side, two semi-melodic and highly rhythmic pieces ‘The ‘Wood’ and ‘The Mole’ which won’t frighten the horses too much and resemble the sort of big-band jazz pastiche which Zappa did so well with The Grand Wazoo in the early 1970s 1. It’s not all full-on raging storms of brass and guitar though, and the moody ‘Theme from Fanny & Alexander’ is an uncategorisable slow instrumental which demonstrates conclusively that The Young Mothers could hold down a profitable movie soundtrack gig in Hollywood without even breaking into a sweat, and the mysterious ‘Virgoan Ways’, an exercise in creeping doubt and ambiguity which showcases the gorgeous vibraphone playing of Stefan Gonzalez, whose father Dennis was a jazz trumpeter who set up the Dallas Association for Avant-Garde and Neo Impressionistic Music.

An unpredictable and challenging set, from serious players who have earned the epithet “heavy hitters” and are out to prove it to a frightening extent. One suspects a live gig by these bruisers would be pretty intense. From 26 March 2014.