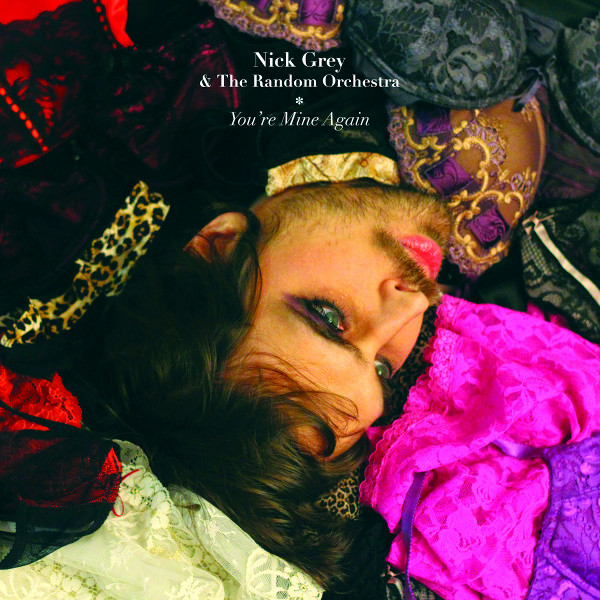 Masculinity – when not expressed in violence – can be a ridiculous thing; infinitely more so when affected, and especially when accompanied by pretensions of sensuality. Without a strong sense of irony, how could one take seriously so many songwriters? Appropriately self-deflating figures such as Bowie, Bonnie Prince Billy and Serge Gainsbourg find berth in the variegated pop montage of Nick Grey’s latest album, You’re Mine Again, which lands with equal measures of sincerity and self-deprecation, and while this doesn’t quite elevate Grey to the level of his muses, at least shows him to be of suitably similar sentiments. And while very much the product of a fertile and exploratory mind, Grey’s semi-pastiche efforts convey a convincing over-identification with the different aspects of thwarted masculinity, in a manner that practically passes through the other side of its own theatricality.

The explicit intention of You’re Mine Again is to explore the many states of agitation – such as paranoia, anger and denial  – induced by romantic attachments, and their relativity to an idealised (and perhaps mistreated) partner, in a subdued, ‘80s sounding vein of soulful chanson. I’ve elected not to take his lyrics at face value, but rather to see this smouldering artist persona as tongue-in-cheek, notorious episodes being the scarf, bread and shoe-less narrator exuding corny delight at having someone to share his twin bed in ‘Heart Of The Glacier’ – with its Gainsbourg fixation played out in slithering bass and breathy, dispassionate tones – and the ‘oh-oh-oh-oh-ohh’-overwrought lyricism of the title track, which comes across like Chris Morris lampooning the Britpop act of the day.

Reservations aside, Grey has assembled a crack team of musicians to breathe life into his specifications, making every song a revelation in the form, each linked to the next by a slightly forced sanguinity, which verges as close to the siren-call of a lonely soul as it does self-defeat. And in contrast to Grey’s self-defined torpidity, the pop sentiments that flavour each track are many and varied, from the electro-pop longing of ‘My Love Affair With Might’ to the sun-baked southern twang and drawl of ‘Death Of The Dogman’ whose narrator is still living with his mother. Perhaps the most striking contrast resides in forlorn finisher, ‘Enchantée’, with French vocals delegated to Sarah Maison, whose counterpoint character serves as a token of the overwhelming and distant femininity Grey’s knickers are so in a twist about. So while he does play the literary lover-man role with less finesse than Nick Cave, Grey does at least do so without overt self-regard, making these songs increasingly seductive with each listen.