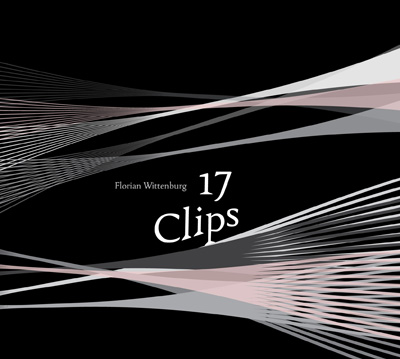 We’ve heard from German composer Florian Wittenburg before with his previous two albums of solo electronics and ebow/piano work, enjoyed and endorsed by Marshall and Morgan respectively. For 17 Clips (NURNICHTNUR 313 07 03), the emphasis is on short, repeated passages of music; acknowledging his debt to minimalism, two of the pieces are dedicated to Steve Reich. Indeed ‘1st Patch for Steve Reich’, played by the composer using a marimba and electronics, is almost a masterclass in how to achieve the exciting phase effects which so preoccupied Reich in his 1960s work. What’s admirable is how Wittenburg, besides producing quite beautiful music, does it with such precision and with virtually zero in the way of aggressive attack. You have to listen quite closely to even identify the shifting patterns as the notes interlock with each other; minimalism for the doll’s house. He repeats the same triumph on ‘2nd Patch For Steve Reich’, played on the vibraphone.

In a somewhat different mode, the album’s centrepiece is the title track, ’17 Clips’, which is played by Daniela Grenz’s cello and the accordion of Burkart Zeller, with added electronics by the composer. This piece is derived from music originally composed by Stephan Froleyks, for a radio play composition. In the event, only a small number of cues were used from Froleyks’ music in the radio show; Wittenburg therefore elected to salvage the entire composition, recasting the work in a form that would use all the cues – or “clips”, as he calls them, wishing to exploit the connection with the cinema. Further, he alludes to the way he “convoluted these fragments in a special manner, so that it sounds orchestral.” I’m guessing now, but it seems that ’17 Clips’ represents an elaborate and ingenious labour of layering, sampling, or editing (or all three methods), to produce a completely seamless whole of shimmering, delicate music of an unearthly beauty – and a piece which I suspect would be nigh-impossible to reproduce outside of the studio. The musical phrases feel like they’re somehow cascading in slow motion, like an impossible waterfall of ice crystals. While this one doesn’t have the ordered regularity of the Steve Reich piece, the precision of the composer’s thinking is still evident in the finished work. The same piece can also be seen on the DVD part of this set, where visuals have been added by Marcel Wierckx. There are also two (short) performances of compositions by Arvo Pärt. Sent to us personally by Florian Wittenburg, arrived 6th March 2014.