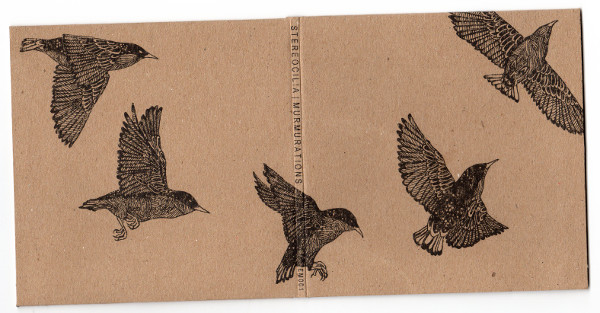 A murmuration is a convergence of many, many birds flying together, usually in early evening around a communal roosting site. I have watched the starlings perform their spectacular feats of airborne synchronisation over the West Pier in Brighton for many years. I am always fascinated to watch, as in addition to the spectacular “cloud” of birds circling around above the pier, you can also see satellite members of the winged community taking up perches on the roofs of the surrounding tall blocks of flats, chirping away, acting as direction markers for the birds flying in from The Downs at top speed to join the murmuration, before they all settle down to roost for the night on the old pier itself.

The raw card stock sleeve features line-drawn artwork by Sarah James depicting nine birds in flight fairly close-up some of which appear to be taking off or landing so the beautiful visual effect of a murmuration in full flow is only vaguely alluded to when you pick this item up for the first time. Nice though the illustrations are.

These Murmurations however are three instrumental pieces of music produced by the guitar, synths and sampler of one John Scott. A quick glance at his website offers the information that as well as having recently supported Bridget Hayden and Dirty Three member Mick Turner, Scott also performs as part of Rhys Chatham’s 100-piece guitar orchestra. Here, there are also details of other interesting releases under the Stereocilia moniker and a nice although disappointingly truncated, video of part of a recent in-studio performance on Resonance FM’s HelloGoodbyeShow.

The first track on Murmurations is entitled “FWD>>” and is made up of a meandering delayed guitar paired with an ethereal drone reminding me of the excellent New Zealander Peter Wright a little. Feeling a little under the weather when I first listened to this disc, this piece immediately prompted in my fevered imagination a vision of the whole of Manhattan hovering 100ft off the ground. At night. And then moving on to Steve Hillage or Allan Holdsworth playing at a wind-powered micro-festival on a French hillside at dawn. Ahem. On subsequent listens, as “FWD>>” develops over its 23 minute duration, it occurs to me that, pleasant though it is, there is nothing particularly original happening here, although I suspect its author may think otherwise. But does it matter? I suspect not – it seems certain to me that young people of a vaguely adventurous nature will love this to accompany their many and varied covert nocturnal meanderings – as I said before, this is great music to watch the dawn to. You will need additional elements such as a field, the smell of grass or pine trees, a good vantage point and sight of a really nice thick forest canopy, somewhere like the Alice Holt in Surrey, and possibly a campfire. Or you could pitch your tent next to a lake. You get the idea. Or why not just email Mr Scott and invite him over to your next rural soiree? Drifting, aimless music which makes no great demands from the listener and is all the better for it.

The next track “Dilute”, in total contrast, begins like a minimalist composition – there’s even an organ sound in there. Huge, interlocking grinding drones bash into one another. I noticed the tell-tale stutter of digital delay times being adjusted by hand, which is a pleasant enough technique in moderation. I’m also aware of phasers working hard by the 8 minute mark, but it is a shame that I am merely picking out recording techniques, because by now the music has become so unchanging.

The closer is named “Bright Light”, something us nocturnal mogwais like to shy away from. This is thoroughly recommended. It is ten minutes of extracted shoegaze guitar fed, not unlike sunlight refracted through water, through a filter of shimmering crystal, but more bitter in the top notes, possibly. I’d need to know more about the terroir. You are asking would or could I live with this music on a daily basis? Having been through shoegaze the first time around, I’d have to say yes, but I wouldn’t spend fifteen years living in a van in Alan Bennett’s garden in order to save enough money to collect the entire crop of shoegaze’s youthful second wind, let’s put it that way. Although I do like that Ringo DeathStarr shambles quite a lot.