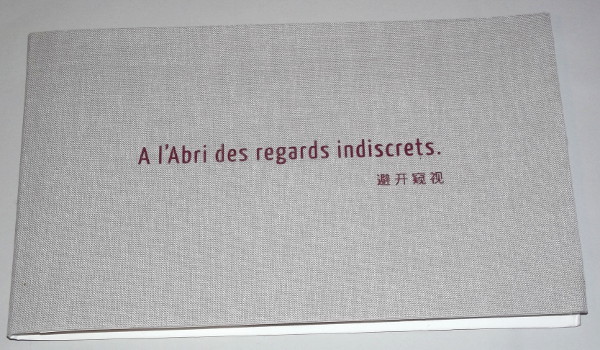 Vialka have been firm favourites of TSP ever since we heard their La Poursuite De L’Excellence in 2011. The duo of Eric Boros and Marylise Frecheville usually perform an exceptionally impassioned and energetic guitar-drum-voice act which, I would imagine, is pretty powerful when seen live. That said, I had (and missed) the opportunity to see them in London this summer at the Tête-à-tête festival for experimental opera. They were performing their “pocket opera” A l’Abri des regards indiscrets, a new work which they composed and perform themselves working from a libretto by Marylise, and of which we now have a copy presented as a CD (VIALKA via-015) inside a full-colour cloth-covered book illustrated with photographs from the stage event. Unlike their angsty acoustic-punk rock music however, the music here is somewhat more subdued, angular, and it is centred around the very wordy libretto – lots of words, which are delivered against a backdrop of spiky, stop-start musical bursts. It’s very dramatic, and the duo perform this semi-absurd piece of stagecraft working to Julie Binot’s direction and Sebastian Bordel’s lighting effects.

It’s a contemporary take on La Comédie Humaine 1, an unflinching look at the highs and lows of human relations, and the couple enact stark, charged vignettes depicting the futility, pain, doubts and misery of love, alongside warmer moments which convey comfort and compassion. Emotional extremes are the norm in this world, couples must shout at each other to express their true feelings, and they live by the Jean-Luc Godard observation that “people kill each other in bed”. Ultimately it seems that the marriage ends in despair, if Marlise’s Epilogue is any indication with its laments of “total delusion, onslaught of unhappiness…we had it all but that wasn’t enough.” Also, given that one of the stage directions is taken from a Victorian treatise on pathology, i.e. the somewhat nightmarish episode ‘Camembert’, it seems that an intense love affair is stressful enough to send a poor soul to the madhouse. While not exactly an easy listen, and somewhat mannered in places, this work is highly innovative – a taut, compressed bundle of lyrical images and bold musical composition, and it adds up to a brave and unique artistic statement. From 21 March 2014.