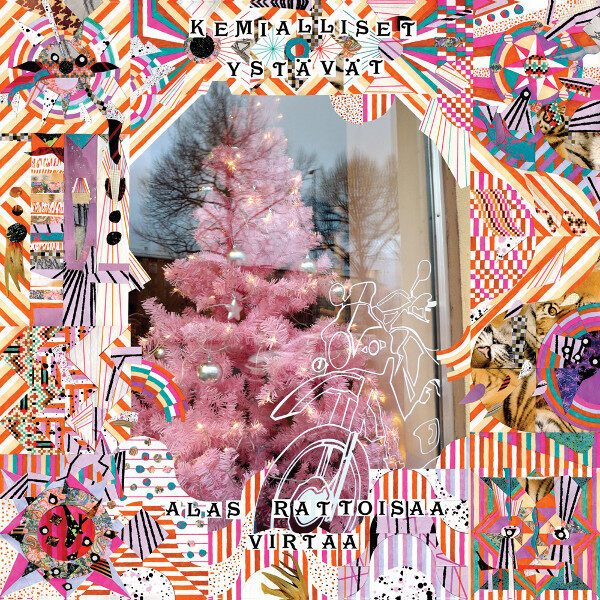 Here we have the Alas Rattoisaa Virtaa (DEKORDER 075) LP, which is the new LP from Kemialliset Ystävät, and their first release for about four years. This new strain of Finnish music was very much in vogue about 10-12 years ago, thanks partly to the unending efforts of Aquarius Records in San Francisco; it became convenient to perceive it as a genre, and to give it a name, and it became “Finnish Folk” or “Finnish Psychedelia”. I think Jan Anderzen is one of the foremost performers – he also played in Avarus, Hevoset, and many others, beside performing as Tomutonttu – and his band Kemialliset Ystävät is widely perceived as being the most inventive and original within this genre, if such it be. I did pick up two or three of their albums on Fonal Records and, to this day, I always find myself baffled by them at every listen. Their music is great fun, yet usually leaves me with an impression of being completely loopy, speaking a private language, and bordering on the unintelligible.

I’m finding Alas Rattoisaa Virtaa 1 more of a rewarding listen, somehow. There seems to be more substance to grab hold of, more purpose to the songs, and a generally encouraging sense of direction; this time, when offered the rope ladder to ascend into the mad treehouse of the Finns, one can only comply with gratitude. This structural strength may be because of the large number of worthy collaborators who appear on this album. To namecheck a few of these underground heroes, there’s Joshua Stevenson, from JOMF and Cast Exotic Archives; Jeffrey Alexander, also from JOMF; Laurent Gerard, the mad French genius who is also el-g; Steven Warwick from Birds of Delay and Heatsick; and Goodiepal, everyone’s favourite Danish fruitcake. This strong international mix of players have joined the regular Ystävät team to great success, and while it’s probably impossible to say exactly who contributed what, the end results have shape, rhythm, melodies, patterns, ideas; in all the sort of coherence that I was somehow unable to find in the earlier, more meandery work. The other strategy to note is something noted as “the desire to get lost in the sound archives”, which may or may not refer to Anderzen and crew working with unreleased materials from their catalogue, and reprocessing them in some way; and the editing methods involved, hopefully informed by a need for concision which has assisted greatly in reducing excess, cutting down on the sort of twee and playful musical dalliances which sometimes characterise music of this ilk.

To say all of this kind of misses the point though, because there’s such an immediacy to the album; as soon as you spin this you’ll likely experience the sensation of entering another world; dream-like, visionary, hallucinogenic, painted in bright and optimistic colours (stop me before I start describing a Peter Max poster), and impossibly beautiful. Even when the beauties and pleasures are fleeting and insubstantial, the music continues to make an impression, and you should be pleasantly surprised, if not frequently amazed. This arrived here 26 March 2014, was released in May 2014.