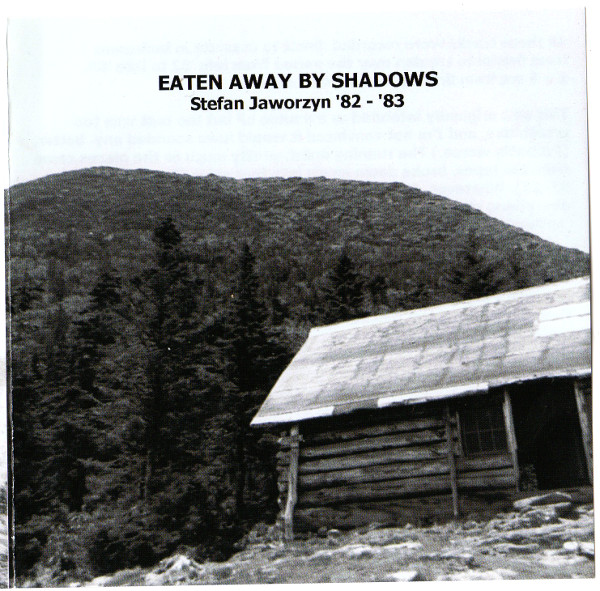 We’ve been trying to keep up with Stefan Jaworzyn‘s increased output ever since he relaunched his Shock Records label in 2013…besides three vinyl EPs of his solo electronic music which have apparently caused him no end of pressing-plant misery, there have also been new records for Kye, Trensmat and Blackest Ever Black – which I hope to get around to hearing in due course. In the meantime here’s a compilation he bunged out called Eaten Away By Shadows (SHOCK RECORDS SX036). This is an album of his early solo bedroom recordings, made between 1982 and 1983, some years I think before this miserable fellow even deigned to add his quota of anger and bitterness to the festering pile of hatred that was Skullflower. Picture the scene…it’s the early 1980s, the hideous fangs of Thatcherism are beginning to bite, there’s an atmosphere of mistrust, all looks grey, and the bitter civil servants at the Job Centre regard you with stern eye through metal bars. In this foul incarnation of the UK, Stefan tries to make his home in squalid bedsits in Bristol and London, and like hundreds of other disaffected gumps, expresses his frustration through guitar-drenched noise and electronics. He is at some pains to stress the home-made nature of the material, all of it recorded direct to cassette, and realised using cheap equipment that he could abuse and destroy in the process. Read with amazement as he describes with obvious glee his violent attacks on guitars and mics, and his primitive methods of realising feedback, where he does things with contact mics that a man should not do. Malfunctioning equipment thwarted him at every turn, but he turned that obstacle into a virtue. Distortion, distortion and more distortion were the order of the day, said effect compounded by the ramshackle set-up, the tape echo unit, the limitations of cassette tape…perhaps even worsened by transferring the tapes onto CD. Anyone who’s ever taken an interest in the post-punk, DIY, bedroom cassette scenes of the 1980s ought to be slavering at the chops by this point.

But this release isn’t some nostalgic curio, since the music turns out to be very good indeed. We’ve got some of the more “user-friendly” stuff frontloaded at the start of the album, tracks like ‘Sleep’, ‘Two Note Bass’, and ‘M.O.R.’, all of which use a simmering drum machine framework to underpin various anguished guitar howls and controlled feedback experiments, producing some archetypal “bleak” and monotonous voyages into the heart of Grimdom. Fans of the so-called “Cold Wave” genre will be quids in, assuming they have any room left in their carbon-coated lungs to inhale this toxic content. Things are already turning even nastier by the time of ‘Untitled’, with its insistent and brutal metallic crashes that make a mockery of everyone from SPK to Test Dept, but this is followed by the foul horror of ‘Torn Apart’, which showcases severely denatured guitar groanings (perhaps produced by slowing down the tape) being ritually enacted across a miserable, slow pulsebeat. ‘Second Orgasm’ is just pure “Harsh Noise Wall” blasted out with scant regard for the sensibilities of the million microbes that curl up and die under its death-ray beams, while the 12-minute ‘Winter’ is even more abstracted and attenuated, a juddering wail well deserving of instant admission to the Industrial “Hall of The Infamous”.

As you can see from the above, I’ve namechecked quite a few underground genres, some of them carelessly and in ignorance…but that’s too bad…there’s no doubt Stefan’s heightened awareness of the 1980s musical landscape was permeating his nauseous consciousness at the time, but it’s also fair to say he was (a) anticipating some of the wilder extremes still to come post-1983, and (b) doing them all in a very creditable and original fashion. The conviction in this music, which he self-deprecatingly describes as “primitive rock, industrial, drone and violently abusive guitar mangling”, is palpably evident through every note, and far from “experimenting” with sounds or techniques, it sounds more like he had already practised himself to a point where he knew exactly what he wanted to do, what ends he wished to achieve. Of course, it is a relentlessly alienating listen, full of outrageous violence at one extreme and lonely, brooding depression at the other, but the emotions and sentiments are real, and they have transformed successfully into sound – even beating the challenge of decaying oxide tapes across 30 years. While three of these tracks have surfaced as a compilation track, a seven-inch on Fusetron, and a remix for Band of Pain, most of this anti-social filth is being unleashed on our awaiting lugs for the first time. Essential…and to think it was almost going to be a double LP! From April 2014. 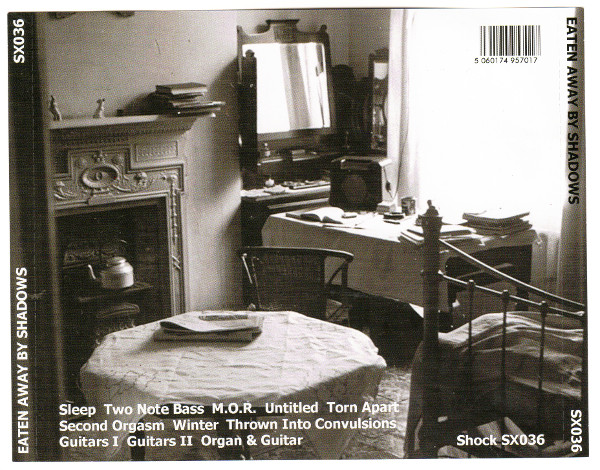