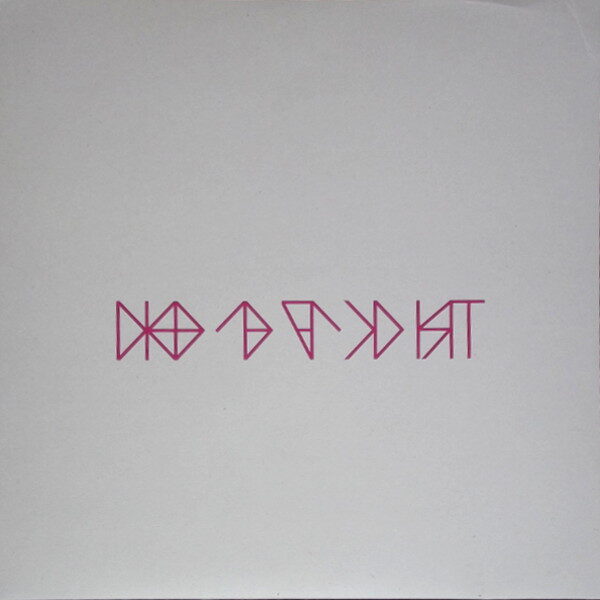 Another vinyl art object from the Berlin label Corvo Records, this one less elaborate than others in the series in that the sleeve is plain grey card albeit with nice raised lettering in red (resembling runes in their avant-garde typography), and the vinyl is pressed in a sumptuous shade of pink. The contents of trick17 (CORVO RECORDS CORE 006) were put together by dieb13, the Viennese musician whose catalogue is not well represented in my collection, but I know of him for his very severe turntabling and computer-based works. This release is somewhat uneven; I decided after five minutes of listening I couldn’t abide the B-side, titled “visible”, which resembles an annoying buzzsaw or power-sander passing over my ears in a regular fashion. The inert noise suggests that dieb13 were passing his tonearm over a rotating record and taking it off again, with highly regulated swoops like some sort of avant-garde seagull snatching at your sandwich. Much as I savour noise music, this was a little process-heavy and anonymous for my tastes. The A-side “audible” on the other hand is a resounding success. Through means unknown (the sleeve simply describes a series of actions, such as recording, editing and mixing), dieb13 has created a very effective jumbled sensation which I would characterise as “the radio station from Hell”. Yes, shortwave, static and feedback are in here, but so are many fascinating electronic musical layers, and controlled by the hand of a rigid genius. After some moments, the delirious sensation is such that you’ll imagine you are being sent distress calls and S.O.S. signals for your ears only, and that you alone have the personal decoder/receiver equipment built into your very ribcage in order to accept these messages. dieb13 (Dieter Kovacic) has created a bold and assured statement in these 20-some thrilling minutes, showing he has totally assimilated his technical environment and that he can make his turntabling equipment perform like an entire flea circus of trained seals. All the dogs are barking, to put it another way. I gather this young man is largely untrained in “conventional” music making, and has come into experimentation via the route of DJ-ing, a trend which (some scholars and historians claim) is reflected in much of the Viennese “scene” since the 1990s, and further evinced in the unstoppable rise of the Mego label. While not as dense or conceptual as other Corvo Records we have noted, this is dynamic, entertaining, and a highly innovative burst of fast-moving abstract noise. Arrived 15 July 2013.

Focus On Nothing On Focus (AUSSENRAUM RECORDS AR-LP-001) is a split LP of sorts, between Francisco Meirino and Kiko C. Esseiva, and it’s a limited numbered press on a vinyl-only label based in Switzerland. Each creator has worked with the same source material, and produced a side-long reworking of the content. There’s a shopping list of equipment printed on the back cover, from which we learn that many hours of recordings were produced to arrive at this highly compressed and refashioned result. Neither side is particularly engaging though, and I categorise this album as a joyless exercise in dull process art. Meirino admittedly has lots of layers going on, and there’s plenty of textures in the way of creaks, drones, clicks and sighs in this strange abstract piece that sits somewhere between field recording, electro-acoustic treatments and electronic music. Yet I can’t get hold of anything substantial here, and find my attention wandering every two minutes. The sounds just aren’t memorable enough, and the assembly seems meaningless. Esseiva is slightly more successful in that he allows himself a tad more in the way of studio treatment to juice up the otherwise inert sounds, but despite the odd flourish of reverb, it too remains rather ordinary. Meirino has not dented my noggin much with his previous worthy efforts, although Paul Morgan found much of interest to report on his Untitled Phenomenas In Concrete. I am personally quite keen on Esseiva though, and have found his studio concotions for Hinterzimmer Records both beautiful and poetic, which is why I feel short-changed by this pedestrian release. From 10th December 2013.